How Indonesia will control Australian migration 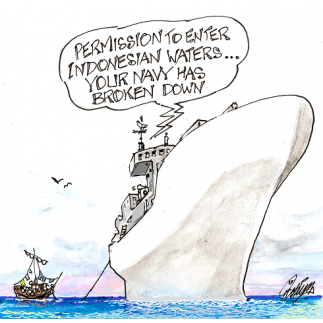 Wake up Australia. Australia will get through this boats crisis and almost certainly a determined Tony Abbott will stop the boats

But our defence forward planning is so bad that by the end of the decade Indonesia will have such defence superiority over Australia that in 2020 the Indonesian president, not the Australian prime minister, will decide how many refugees will be allowed to come to Australia.

To understand what is ahead you first need to read the Jakarta Post where we discover that the Indonesian president has used the Australian refugee crisis to revamp and sharpen Indonesia’s military preparedness.

And it’s clear the Indonesians believe their greatest threat is from Australia. Air Force chief spokesman Air Commodore Hadi Tjajanto told The Jakarta Post: “We are concentrating on four radars in Timika, Merauke, Saumlaki and Buraen, which face Australia.

“So if we notice any border violation, Makassar will be ready. Australia is reachable from there.” (my emphasis).

The article carries the heading: “Air Force casts its eyes on borders with Australia” see link at the bottom of the page.

What makes that Indonesian air force statement so important is that the Indonesians realise that ultimately it’s about air power. And by the end of the decade the Indonesians will completely control Australia’s northern air space.

To achieve dominance over Australia Indonesia plans to buy an incredible 180 of the Russian/Indian Sukhoi fighters, almost certainly including the T-50 PAK-FA and Su-35S. We are planning to buy America’s Joint Strike Fighter which has been an unmitigated disaster and is absolutely no match for the Russian/Indian aircraft.

And it’s so noisy that when the “stealth” bomber lands or takes off from Darwin the residents near the airport will need ear protection. We may need to base the JSF further south because of the Darwin noise problem but unfortunately the JSF has limited flying range.

As we saw with the Australian defence abuses the department of defence has a culture of cover ups and the JSF disaster is its biggest ever cover-up.

Australia premier defence analysts Air Power Australia group, has been calling the Joint Strike Fighter disaster correctly for a decade and warning us about the looming Indonesian superiority. Airpower Australia wants Australia to convince the US to merge the JSF program with a restoration of the F22. We would then have an aircraft that could match the Russian/Indian fighter and with American help we would retain control over our air space.

America’s defence chiefs are also covering up the disaster, although high-level leaks mean that Americans have a better appreciation of the JSF disaster than Australians, but Fairfax media has begun to question the capabilities of the JSF compared to its rivals.

The problem is that the developers Lockheed Martin keep saying they will fix the faults and improve the performance and no one wants to face the fact that the attempt to make the joint strike fighter a plane for all services has not worked.

If we end up with a fleet of Joint Strike Fighters or continue to rely on the out-dated and next to useless Hornets (an even worse option) then by the end of the decade Australia may need to turn to China for defence protection against Indonesia. China has a big stake in our minerals and has an aircraft that looks like it can match the Russian/Indian plane.

All our recent defence ministers, including the current one, have let us down and not been prepared to go beyond what the military chiefs tell them. John Faulkner did wake up at least to the danger but promptly resigned.

Footnote: For those wanting Australia Day weekend reading first read the Jakarta Post:
TNI gears up, sets sights on foreign threats, January 22, The Jakarta Post.
Air Force casts its eye on borders with Australia, January 22, The Jakarta Post.
Then read some of my previous commentaries on the JSF disaster, which unfortunately have proved accurate:
US 'Deep Throat' destroys a JSF cover-up, September 20, 2013
Stephen Smith's 11th-hour flight option, March 5, 2013
Awakening to a decade of defence failure, February 19, 2013
Shooting down lies from the Sky, February 15, 2013
The sound of a JSF death rattle, October 4, 2011
By Robert Gottliebsen