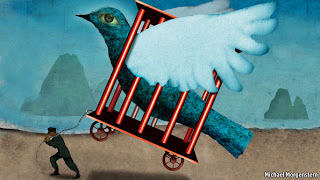 The CCP has a history of monitoring political unrest around the world closely. The Arab Spring is no different

As the Arab Spring enters its third year, events in the region remain fluid. Still, enough time has now passed that some preliminary conclusions can be reached.

The Chinese Communist Party (CCP) is one institution certainly drawing lessons from the Arab Spring. It is well known that the CCP studies political unrest in other parts of the world in search of lessons it can use to maintain stability at home. The most notable instance of this was the massive study the CCP undertook into the causes of the Soviet Union’s collapse. The lessons the CCP drew from its more than decade-long study into the Soviet bloc have since been incorporated into the curriculum at party schools, and are regularly referred to by senior Chinese officials.

Although the CCP’s study of the Arab Spring won’t be nearly as massive, the events in the Arab world are of significant interest to the party for a number of reasons. The first is simply their size and magnitude. Additionally, in its early days the Arab Spring inspired some Chinese to call for a Jasmine Revolution in China. Although nothing much came from these calls, there were a tense couple of weeks in China that saw the CCP on high alert.

Finally, Chinese leaders should be particularly interested in the Arab Spring simply because it provides an excellent case study. Although the protests seemed to be motivated by similar causes, they quickly diverged in terms of how each government responded, as well as their ultimate outcomes. Thus, the protests offer valuable lessons for how the CCP can maintain power in China. Four points from the Arab Spring seem particularly pertinent:

The regimes that have best weathered the Arab Spring have gotten ahead of events on the ground. At the first sight of unrest in Egypt, Saudi Arabia sought to preempt protests by significantly increasing subsides. The Gulf Cooperation Council contained unrest in Bahrain by using overwhelming force to smother the then-nascent protests. Only after order had been restored did the government begin offering small concessions. In other countries like Morocco and Jordan, governments quickly appeased protesters by offering at least cosmetic concessions, such as removing especially unpopular leaders. The new Chinese leadership seems to be pursuing a similar course by initiating highly publicized anti-graft and mass line campaigns that are partly aimed at reducing public anger over the party’s excesses.

The Arab Spring reaffirmed the importance of controlling the media. Like other recent protest movements, the Arab Spring has shown the centrality of social media in protestors’ ability to organize demonstrations and sustain momentum for their causes. Governments that can shut down social media sites have a significantly better chance at weathering unrest.

No government is as better positioned to achieve this than the CCP. As one recent study concluded, “The size and sophistication of the Chinese government’s program to selectively censor the expressed views of the Chinese people is unprecedented in recorded world history.” Although social media is increasingly popular in China, all the major Western social media sites are banned. Instead, Chinese netizens use national social media sites that the CCP would almost certainly move to temporarily shutter in the event of significant protests.

The Arab Spring has also demonstrated the value of imposing an international media blackout. The Arab regimes that have been able to prevent independent reporting have been significantly less constrained in the level of repression they can employ. This was best demonstrated in the case of Bahrain. The Syrian government’s ban on foreign reporters has also been highly effective. Despite the daring efforts of some journalists who were able to sneak into the country, much of the carnage in Syria has gone undocumented. Had the deaths of more than a 100,000 Syrians been broadcast live on al Jazeera, Western leaders would have been under much more intense pressure to intervene. It’s therefore likely that if significant unrest breaks out in China, the CCP will move quickly to deport all foreign journalists.

Many of the successful Arab Spring movements have been in homogeneous countries. By contrast, regimes that have successfully exploited existing social cleavages have fared far better. Thus, the Saudi and Bahraini governments have successfully depicted their protest movements as disgruntled Shi’a taking cues from Iran. Similarly, Bashar al-Assad has managed to deprive the Sunni majority population of support from any of Syria’s minority groups. He has also kept the Sunni opposition divided amongst itself. Even the Yemeni government has managed to hold onto some power by exploiting its many divisions.

In some regards, this holds limited utility for the CCP, given that the Han population in China accounts for more than 91 percent of the country. Still, because of this, the CCP will likely go to great lengths to depict any initial violent acts—like the recent attack in Tiananmen Square—as being perpetrated by an ethnic group. Furthermore, while China is ethnically Han, there are many regional divisions within the country that the CCP already uses to its advantage.

Finally, the Arab Spring has once again demonstrated the resilience of governments that can maintain elite cohesion. The seeds of Hosni Mubarak’s rapid downfall were planted months before protests began when he and the military began a fierce power struggle over the issue of succession. Mubarak’s actual successor, Mohammed Morsi, also fell quickly thanks to a lack of military support. Similarly, although the Yemeni government hasn’t completely collapsed, it has effectively lost control over large sways of the country chiefly because it failed the win the backing of key power brokers. Egypt and Yemen contrast sharply with the Syrian revolution in which Assad has been able to retain the support of the Alawite minority that make up the bulk of the elites before the protests began.

This is the area in which the CCP is weakest. Loyalty to the Communist Party has declined precipitously over the years, and most Chinese now join the CCP purely for personal economic gain. But even these economic perks will decrease as the CCP looks to rebalance to a consumer-driven economy. Whether ordinary Party members—including members of the security forces and army—will fight for these declining benefits could significantly shape China’s future. ‘The Diplomat’