An idiot's guide to this Thailand's election 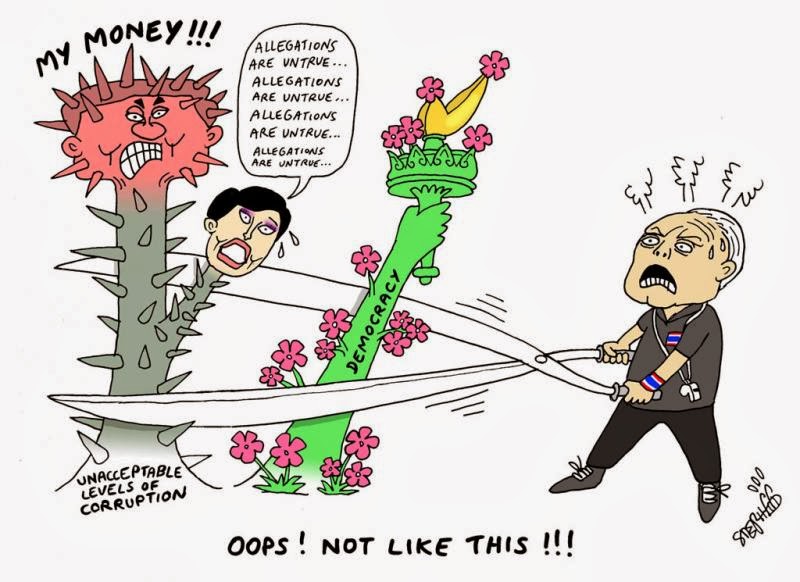 If you go to the polling booth to cast your ballot this Sunday, you are one of those who believe that the election must proceed as the caretaker government insists. It's part of democracy, and nobody has the right to block you from casting your ballot

Of course, you know in advance that only one major political party - namely the ruling Pheu Thai Party of Premier Yingluck Shinawatra - is in the race. The other big party, the Democrat Party, has boycotted the election. The rest on the ballot are medium-sized and small parties.

This isn't an ordinary election. It's an election under the state of emergency.

Advice has gone out in the social media for those who will be going out to vote: Dress lightly, ready for action. Adopt "camouflage tactics" by wearing a whistle around your neck even if you are totally against Suthep Thaugsuban - to fool some of the hardcore anti-government protesters who might try to get too close to you.

If you decide to stay home, you probably agree with the protesters who demand that "reform must come before election" because you don't think democracy is just about casting ballots. Before you pick your next MP, you want to make sure that the election process undergoes a major reform and that the country is rid of corrupt and bad influences.

If you are somewhere in between, you might visit the nearest polling booth this Sunday and mark the "None of the above" box because none of the parties listed in the ballot represent your interests.

But be warned. Make sure you check the "security situation" at your polling booth before you leave your house this Sunday. The protesters led by Suthep Thaugsuban have vowed to block the ballot-casting nationwide. The caretaker government has advised voters who suffer disruptions or harassment to report to the nearest police station.

Your personal safety is of the utmost importance. So, if you insist on exercising your right to vote, by all means cast your ballot. Your choice of parties might have been limited. You should have decided before you leave home which is your favourite party. You should know which parties are in the race. This time around, you might not have the privilege of weighing the pros and cons of the major parties. But if you go out and vote, it's clear where you stand in the current political situation. It's your right, and everybody else should respect that.

But if you think the government is being stubborn by proceeding with the election despite warnings from the Election Commission of potential trouble, delays and violence, then you may just stay home. Some of you may decide not to stay home and join the protest. But make sure that you conduct your "civil disobedience" in a civil way. We are all under the emergency decree and as such can be arrested for even mingling in a group of more than four persons.

If you think an election should take place and you want to show your dissatisfaction with the limited choice of parties offering their services, you could cast a "No" vote to register your political stand.

If you harbour really strong feelings against the poll and are tempted to dramatise your disagreement, don't tear up the ballot. It's a legally no-no and you could be fined or even jailed for doing that. I guess it's because although the gesture is supposed to be part of demonstrating "disobedience" against the powers-that-be, the authorities concerned don't consider that "civil".
I have great respect for those on both sides of the political divide - and those caught in the middle.

As for myself, all I ask is: Respect my political privacy. The dilemma of deciding between a "No Vote" and "Vote No" is so daunting I can't tell you just yet what I'm going to do this Sunday.
Suthichai Yoon, The Nation/ANN, Bangkok