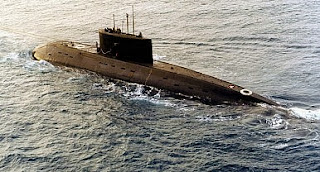 On December 31, Vietnamese media reported the delivery of the first Russian Project 636 Varshavyanka-class (enhanced Kilo) conventional submarine to Cam Ranh Bay. The sub was transported from the port of St. Petersburg on the heavy lift vessel Rolldock Sea.

The submarine was accompanied by experts from Admiralty Shipyards in St. Petersburg who will undertake final work before the formal handover ceremonies. The submarine will be named HQ 182 Hanoi. The last of the remaining five Project 636 Varshavyanka-class submarines is expected to be delivered by 2016.

In late November, during the visit of Vietnam’s party Secretary General Nguyen Phu Trong to India, it was announced that India would provide training for up to 500 submarines as part of its defense cooperation program with Vietnam. Training will be conducted at the Indian Navy’s modern submarine training center INS Satavahana in Visakhapatnam. The Indian Navy has operated Russian Kilo-class submarines since the mid-1980s.

The arrival of HQ 182 Hanoi provides a timely reminder that regional navies are embarking on naval modernization programs that increasingly include the acquisition of conventional submarines.

As long ago as 1967 Indonesia became one of the first Southeast Asian countries to acquire an undersea capability when it took delivery of a batch of Soviet Whiskey-class submarines. These were later replaced in 1978 by two West German diesel submarines.

In 2012 Indonesia’s Defense Ministry announced it was planning to expand its submarine fleet to twelve by 2020. Twelve is the minimum number of submarines required to cover strategic choke points or maritime entry passages into the  archipelago.

At present Indonesia has an order for three U-209 submarines that are being built in South Korea by Daewoo Shipbuilding and Marine Engineering in cooperation with PT PAL Indonesia. The U-209s are expected to be delivered between 2015 and 2016.

In addition, Indonesia is mulling two options. The first option is to buy and modify used Russian Kilo-class submarines. An Indonesian technical team headed by Navy Chief of Staff Admiral Marsetio will visit Russia this month to inspect the submarines and associated weaponry. It will report on the cost and feasibility of this option.

Indonesian sources report that the Kilo-option is attractive because the submarine can be armed with either the supersonic Yakhont or Klub-S cruise missiles. The latter can be fired underwater and strike surface targets up to 400 kilometers away.

Press reports indicate that Indonesia’s new submarines will be berthed at the recently built Palu Naval Base in Central Sulawesi. These submarines would be able to operate in the deep waters around Indonesia’s eastern islands.

In late November Singapore announced that it had signed a contract for the purchase of two new Type 218SG conventional submarines from ThyssenKrupp Marine Systems in Germany. The sales contract included provisions for servicing and crew training in Germany.

Singapore’s submarines will be outfitted with the Air Independent Propulsion system and are expected to be delivered by 2020. The new submarines will replace four older Challenger-class submarines and will join the two refurbished Archer-class (formerly Swedish Västergötland-class) submarines to form Singapore’s undersea fleet.

Malaysia acquired two two Scorpène-class submarines from France following a contract signed in 2002. The two boats, RMN Tunku Abdul Rahman and RMN Tun Abdul Razak  entered service in 2007 and 2009, respectively. They are based at Sepanggar, Sabah. In May 2012 Malaysia indicated that any further submarine acquisitions would depend on the availability of funding. That year Malaysia signed a contract for the purchase of a Submarine Escape and Rescue Service vessel to be built in Singapore.

In June 2013, Myanmar Army Chief Senior General Min Aung Hlaing entered into discussions with Russian officials for the purchase of two-Kilo class submarines. That same month it was reported that twenty officers and ratings began basic submarine familiarization and training in Pakistan at its Submarine Training Center PNS Bahadur. These two developments underscore reports that Myanmar intends to crease a submarine force by 2015.

In April 2011 Thailand entered the market for the purchase of two to six decommissioned German Type 206A diesel submarines for $220 million. Weighing in at 500 tonnes submerged displacement, they are among the world’s smallest attack submarines. A change of government in July 2011 and internal differences between the new Defense Minister and the Navy resulted in the expiration of Thailand’s options and the shelving of this project.

In October 2013 it was reported that the Royal Thai Navy will include the purchase of three submarines as part of its next ten-year procurement process. Meanwhile, Thailand has commenced construction of facilities for a submarine training center and base at the Sattahip Naval Base in Chon Buri. This base is expected to be completed in March this year and will be equipped with a Submarine Command Team Trainer.

Last year the Royal Thai Navy sent eighteen officers for a thirty-two week submarine training course in Germany and another ten officers for an eight-week training course in South Korea.
In the early years of the Aquino Administration in the Philippines, submarines were reportedly included on a Department of National Defense “wish list” for procurement under an armed forces modernization program. The acquisition of submarines appears has been quietly dropped.

Within the next five years to a decade, Southeast Asian waters, and the South China Sea in particular, will witness a marked rise in the deployment of conventional submarines by regional states. This will make the South China Sea even more congested.

The acquisition of submarine forces will add a fourth dimension to regional war-fighting capabilities – air, land, sea and sub-surface. Submarines will be able to engage in reconnaissance and intelligence gathering, mine laying, anti-ship warfare and long-range strikes.

There appears to have been very little discussion by naval chiefs among the members of the Association of Southeast Asian Nations (ASEAN) about the implications of this development. At the most basic level, few of the ASEAN countries are equipped to assist one of their submarines in distress. Singapore and Malaysia, however, are the exceptions. In late 2008 Singapore launched the MV Swift Rescue, a submarine support vessel equipped with two Deep Search and Rescue vessels.

Singapore has been at the forefront in promoting cooperation in submarine rescue among regional navies in the event of a misadventure. Agreements have been signed with Australia, Indonesia and Vietnam. ‘The Diplomat’