Shan State Army kicks the habit but gets little respect 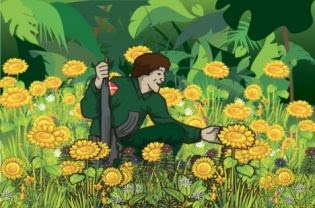 Myanmar's notorious narco-army is reinventing itself in the name of peace, but the govt isn't listening

Back when Shan drug baron Khun Sa reigned over the notorious Golden Triangle, there was nothing pretentious about the narcotics business in this lawless region where opium warlords play for keeps.

Opium, they said, was as good as gold. Some of the local residents were even using it in place of the official currency.

Today, groups like the Shan State Army (SSA), which once fought alongside Khun Sa for Shan independence, are working hard to reinvent themselves as drug-free armed ethnic outfits with their own counter-narcotic policies.

The opportunity to assert their anti-drugs campaigns came after the Myanmar government decided to push for a series of political reforms and renegotiate a ceasefire deal with the armed ethnic armies, including the SSA.

Opium eradication and crop substitution became common ground on which the two sides could work together to strengthen confidence and trust.

But that process has been far from easy. The government has other priorities during this transition period and cooperating with Shan rebels is not high on the list.

The SSA feels it has been shunned, but the ill-feeling is not enough to turn back the clock to when the two sides were at each other's throats on the battlefield.

Opium has always been a part of Myanmar's longstanding insurgencies.

For the numerous armed ethnic armies fighting the Burmese military for autonomy or independence during Khun Sa's time, opium was main the source of income.

Residents in Thailand's northern border provinces, as well as the ethnic Shan and other anti-Burmese junta forces, didn't mind if men like Khun Sa were producing and trafficking opium and heroin if it was in a good cause.

In January 1996, following a relentless assault from combined forces of the Burmese and troops from the United Wa State Army (UWSA) - dubbed the world's largest armed drug-trafficking outfit - Khun Sa decided to surrender in exchange for amnesty.

Certain factions in Khun Sa's Mong Tai Army (MTA), like the one led by warlord Maha Ja, joined peace talks in exchange for limited self rule.

Others, like Colonel Yawd Serk, relocated his troops near the Thai border to set up the Shan State Army-South and continue the fight against the government.

Yawd Serk's decision not to join the Burmese junta served the Thai military quite well. Burma and Thailand at the time were engaged in a quiet proxy war fought via ethnic armies.

Khun Sa's MTA was slightly different because the outfit was not under "Myanmar's legal fold" but was not exactly a Thai lackey either.

And so when his MTA fell apart, Yawd Serk's SSA had to turn to Thailand to ensure that his security and economic lifeline remained intact.

As part of their effort to shake off the ghost of Khun Sa, the SSA pushed through an anti-narcotics campaign with drug-burning ceremonies to attract the attention of foreign and local media.

The UWSA, the world's largest producer of heroin, was not exactly public-relations savvy, but nevertheless tried to convince the world that it, too, wanted to kick the habit.

In late 2004 the Wa leadership said they were planning to announce an end to opium cultivation in exchange for formal recognition from the Burmese government and the world community.

But in January 2005, a New York court indicted eight Wa leaders, some of whom, like the notorious Wei brothers and the Bao brothers, had already been convicted on heroin trafficking charges in the US.

Chinese security officials had hush-hush working relations with the Wa and were hoping that an "opium-free" UWSA would make their dealings with the Wa leaders easier. Nevertheless, ties between the UWSA and the Chinese authorities are as strong as ever.

Wa officials often joke about how disappointed Burmese officials are when they visit the UWSA base, Panghsang, and find "it feels like a Chinese town". From the cellphone signal to the currency and language, the Wa-controlled area in Burma's Shan State is very much an extension of China.

The UWSA wanted a better relationship with Thailand. Much of Khun Sa's territory along the Thai border was occupied by Wa troops who began to build towns and small cities and pack them with villagers the UWSA had forcibly relocated from the Chinese border.

Many of these villagers died along the way, according to a report by Chiang Mai-based Shan Herald Agency for News (SHAN), but the end result was the strengthening of UWSA regiments along the Thai border.

It has not been a comfortable stay for the UWSA troops. Gunfights occasionally break out between the Wa and Thai troops. Just about every border crossing leading to the Wa stronghold has been shut.

As for the SSA, the changing nature of its relationship with the Myanmar government has given it another chance to show the world it is serious about kicking the habit. But going "cold turkey" has been a rough ride.

The SSA's political wing, the Restoration Council of the Shan State (RCSS), in October 2012 entered into a joint pilot project to eradicate drugs with the UN and the Thein Sein government. This past week, the group issued a statement accusing the Myanmar government of dragging its feet over the project.

"The experience of the RCSS in attempting to carry out the joint drug eradication project indicates that the agreement is only on paper and the government has no intention of cooperating on drug eradication," said the RCSS, adding that the "government's failure to adhere to its agreement is affecting trust-building in the peace process".

The very fact that the SSA is urging the government to get moving on the project shows how things have changed in the region.

The SSA may want to turn Shan State into a drug-free area, but the reality on the ground shows it faces a long and tough road. According to a recently released annual United Nations report, opium production in Myanmar has risen 26 per cent since 2012. This year marked the seventh consecutive year poppy cultivation has increased in the country. Some 870 tonnes of opium was produced this year, the largest amount since 2002.

Until there is a meaningful political and economic alternative for the area, opium production, it seems, will continue to form a large part of the locals' livelihood.

Don Pathan is a freelance consultant and an independent security analyst based in Thailand.