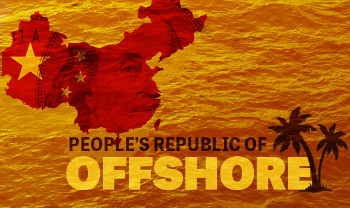 The close relatives of some of China’s most powerful men and women including President Xi Jinping and former Premier Wen Jiabao have maintained secretive accounts in offshore tax havens, with the connivance of some of the west’s biggest accounting firms and banks, according to an explosive study by the International Consortium of Investigative Journalists.

The account details appear in a vast trove of 2.5 million leaked documents made available to the consortium, a network of 160 journalists in more than 60 countries. The report, which is too comprehensive for Asia Sentinel to print all the details, can be found online here. It shows that Xi’s campaign to clean out corruption, which so far has netted hundreds of relatively low-ranking cadres with a few important figures, hardly begins to scratch the surface of illegal wealth fleeing the country.

The records show that relatives of at least five current or former Politburo members have incorporated companies in the Cook Islands or British Virgin Islands. Nearly 22,000 offshore clients were found to have addresses on the mainland or in Hong Kong. The records also include incorporations by relatives of Deng Xiaoping, former Premier Li Peng, and former President Hu Jintao.

More than 50 reporting partners from Europe, North American and Asia have been sifting through the documents since last April. They put names and faces to reports that an estimated IS$1 trillion to US$3 trillion has leaked out of China in illegal capital flight over the past decade.
How much of the funds deposited in the British Virgin Islands, Samoa and other offshore havens is illegal isn’t clear, the report notes. But the revelations provide an embarrassing counterpoint to efforts over the past month to polish up the image of top Communist cadres, especially former premier Wen. The files include specific details of a real estate company co-owned by Xi’s brother-in-law and British Virgin Islands companies set up by Wen’s son and also by his son-in-law, making his protestations sound thin that he knew nothing about their wealth. The files show that at least 15 of the country’s richest members of the National People’s Congress and executives of state-owned companies are allegedly entangled in scandal.

The files are also an embarrassment for the international accounting firm PricewaterhouseCoopers as well as the Swiss bank UBS and other Western banks and accounting firms, which appear to have played a key role in helping Chinese clients set up the overseas accounts. For instance, the report notes, it was Credit Suisse that helped Wen Jiabao’s son create his BVI company while his father was leading the country.

The files come from two offshore firms — Singapore-based Portcullis TrustNet and the BVI-based Commonwealth Trust Limited — that help clients create offshore companies, trusts and bank accounts, according to the report.

Until now, the details on China and Hong Kong had not been disclosed. “As the country has moved from an insular communist system to a socialist/capitalist hybrid, China has become a leading market for offshore havens that peddle secrecy, tax shelters and streamlined international deal making,” the report notes. “Every corner of China’s economy, from oil to green energy and from mining to arms trading, appears in the ICIJ data.”

The growing onshore and offshore wealth of China’s elites “may not be strictly illegal,” but it is often tied to “conflict of interest and covert use of government power,” said Minxin Pei, a political scientist at Claremont McKenna College in California. “If there is real transparency, then the Chinese people will have a much better idea of how corrupt the system is [and] how much wealth has been amassed by government officials through illegal means.”

As the report notes, exposure of top level corruption is extremely sensitive. Late last year the government for months delayed visas for the New York Times and the Bloomberg business news service before finally granting them. Both the Times and Bloomberg had written prize-winning accounts of the wealth enjoyed by Xi and Wen’s relatives although Bloomberg later capitulated and ordered its journalists to ease up on reporting on Chinese graft.

Bloomberg journalist Michael Forsythe was suspended and fired after it was revealed that it was revealed that he was one of the reporters who spoke to the New York Times about the news ervice’s killing a story he had been working on for about a year. Also, Paul Mooney, who had reported critically on China for the South China Morning Post, was denied a visa after he had moved to Reuters.

In November, the report noted a mainland Chinese news organization that was working with ICIJ to analyze the offshore data withdrew from the reporting partnership, explaining that authorities had warned it not to publish anything about the material. ICIJ is keeping the identity of the news outlet confidential to protect journalists from government retaliation. Other partners in the investigation include the Hong Kong newspaper Ming Pao, the Taiwanese magazine CommonWealth and the German newspaper Süddeutsche Zeitung.

Along with the China and Hong Kong names, ICIJ’s files also include the names of roughly 16,000 offshore clients from Taiwan. ICIJ will continue to publish stories with its partners in the next few days and will release the Greater China names on its Offshore Leaks Database tomorrow, the report noted. ‘Asia Sentinel’