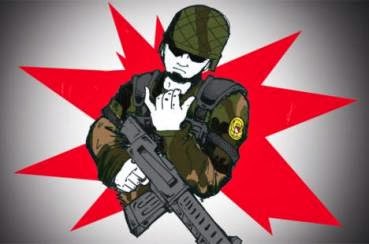 Indonesia’s democracy is being increasingly tested by the triple challenges of anti-reform actors, a high-level political malaise and popular disenchantment with the electoral process

One indicator of this has been an increasing tendency by the Indonesian military (TNI) to reassert itself into the political debate. Indonesia is heading into legislative elections in April and presidential elections in July on the back of poor performance by the country’s politicians, turning off voters in droves. Against this backdrop, one of Indonesia’s most senior army generals has raised the spectre of the army’s return to involvement in politics.

Indonesia’s army strategic command head, Lieutenant General Gatot Nurmantyo, has criticised Indonesia’s democracy as ‘empty’ and said that popular will expressed through elections is not always right. As a panacea, Nurmantyo has called for a reassertion of the nationalist ideology of Pancasila (five principles), which underpinned Suharto’s three decades as military-backed president.

Nurmantyo’s comments, made to a Pancasila Youth (PP) rally in October, reflect an increasing confidence by TNI hard-liners in challenging restrictions on military contact with politics. It was this hard-line faction of the TNI that helped end Indonesia’s military reform process around the time that President Yudhoyono began his second term as president.

Yudhoyono’s second term has been widely viewed as, at best, lack-lustre, and his Democratic Party-led government has been plagued by a series of corruption scandals. With other political parties fairing little better and ‘money politics’ dominating local electoral contests, popular support for Indonesia’s democratic process is in decline.

A series of surveys have shown that Indonesia’s forthcoming electoral participation rate may slump to below half. There is even an appetite among many voters for a return to ‘strong’ leadership, with a preference for candidates with a military background.

In a political environment in which one of the two front-runners for the presidency is former military hard-liner Lieutenant General (ret.) Prabowo Subianto, Nurmantyo’s breaking of over a decade of military silence on domestic politics signals a potential alternative to Indonesia’s democratic path.

Prabowo’s popularity is behind Jakarta governor Joko ‘Jokowi’ Widodo in the presidential polls. But Jokowi, himself a populist, does not yet have the backing of a major political party that is required for presidential nomination. Political support — if it comes — will be from former President Megawati Sukarnoputri’s Indonesian Democratic Party of Struggle (PDI-P), which has also demonstrated pro-military leanings at times.

Democracy in developing states tends to be vulnerable to reversal, particularly where the military remains primarily focused on internal rather than external threats. While Indonesia’s electoral system will very likely be retained, the potential for it to be restricted in ways that render voting more or less meaningless, as under Suharto, cannot be ruled out.

Nurmantyo’s controversial address to the PP was explained away, unconvincingly, by a senior politician as not contravening a ban on military personnel being involved in politics as it focused on the state ideology of Pancasila. The PP itself was founded by the TNI in 1959, soon after the military became directly involved in domestic politics.

Initially a civilian front for the military, the PP quickly degenerated into an organisation of thugs and criminals who often undertook dirty work on behalf of the Suharto regime. It has more recently been involved in violent turf wars with other gangs and remains associated with particular factions within the TNI.

Nurmantyo’s comments are not just the ravings of a military extremist, as he has been viewed as a rising star in the Indonesian army. His hard-line views saw him recently passed over for the position of army commander, but with a more conservative president in office following the July elections it is possible that Nurmantyo’s military career could again rise.

Indonesia’s neighbours are already concerned over the outcome of July’s presidential elections and a possible lurch towards a more assertively nationalist orientation. Set against growing voter apathy, generals such as Nurmantyo are well positioned to push Indonesia even further away from its recent path of reform.

Jokowi is a populist and has not enunciated a clear policy position. He may not be as pro-military as Prabowo, but his views on the military and the nature of democracy are largely unknown. If he was put forward by PDI-P — which is not looking hopeful at this stage — he would be required to follow PDI-P policy, such as it is, which is ‘preservation of national unity’ above all, which in turn is code for a greater role for the TNI.


The likelihood of Indonesia further entrenching its democratic credentials will require a win by a convincingly reform-oriented presidential candidate. Scanning of Indonesia’s political field just months away from the elections, however, holds out limited hope.