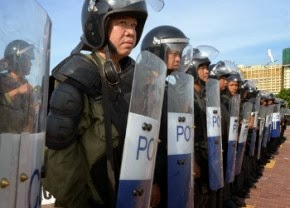 A bloody crackdown on anti-government demonstrations has routed Cambodia’s struggling opposition and raised fears that Prime Minister Hun Sen will end this country’s 20-year experiment with democracy and return Cambodia to a one-party police state.

At least five people are dead – the number is likely to climb – and another 20 wounded after riot police opened fire on striking garment workers outside a special economic zone. Fearing arrest, doctors treating the wounded at small clinics have been reluctant to give out information.

Friday’s violence spread and Vietnamese shop houses were razed and looted while the highway to the southern port at Sihanoukville was blocked, a major issue for the government.

The following morning a combination of military and police then charged and overwhelmed protesters at Freedom Park, where a semi-permanent base had been established in the heart of the capital. Some described the assailants as thugs in civilian clothes. They wore the red armbands that were used to denote loyalty to Hun Sen during the 1997 slaughter of dissenters within his own coalition government.

Further arrests were made Sunday with police focusing on protesters demonstrating against land grabbing. According to the human rights group Licadho at least 28 people had been incarcerated over the weekend. Public gatherings of more than 10 people have been banned.

By Monday morning heavily armed police were continuing to patrol the city as the opposition Cambodian National Rescue Party (NCRP) attempted to regroup. Opposition leaders Sam Rainsy and Kem Sokha have been summoned to appear in court while others remain in hiding.

“The situation in Cambodia has gotten worse and worse. We want Hun Sen to leave, to walk out.

Everyone is depressed and no one feels safe, not at all because we can see he wants to kill everyone that is against him,” said one protester who was too frightened to give her name.

The crackdown came after the CNRP struck a deal with unions and began galvanizing the anti-government movement which led to more than 60,000 people taking to the streets a week earlier demanding Hun Sen’s resignation and fresh elections.

Hun Sen and his Cambodian People’s Party (CPP) were returned but with a substantially reduced majority after the youth vote, people living in the cities and some traditional voters in the countryside deserted the ruling party amid widespread agitation over corruption and land grabbing.

Behind the scenes, the government had warned it would use force and intervene if the CNRP or its loosely affiliated unions attempted to block major arterial roads into Phnom Penh. There were also fears that Sam Rainsy – who over the years has proved himself to be as much the recalcitrant as Hun Sen – would unnecessarily goad the government for political mileage.

The United Nations and Western donor countries — who since 1992 have tipped more than US$100 billion into what was a hopelessly war-torn country – were horrified by Hun Sen’s actions. Among the wounded were 16 monks.

Surya Subedi, the U.N.’s human rights envoy to Cambodia, described the situation as “deplorable” while the United States has urged its citizens living here not to travel too far from home. The European Union, Australia and Japan were understood to be considering their positions after a weekend of frantic diplomatic cables.

“We are dismayed by the continuing use of violence. After the tragic deaths, we hoped that the government would begin to exercise restraint but their actions today show a complete disregard for the rights and indeed the lives of their own citizens,” Naly Pilorge, president of Licadho, said after the clearing of Freedom Park.

The garment industry earns Cambodia more than $US5 billion a year, producing goods for big brands names in the West including Levis Strauss, H&M, Gap and Puma and manufacturers were quick to back the military onslaught against civilian workers pushing for better wages and conditions.

That push began with the Bangladesh factory collapse in April last year that left 1,129 people dead. Unions are demanding a minimum wage of US$160 a month compared with the current rate of US$80 – about two-thirds the price of a pair of Levis.

Chap Sophorn, the commander of the paramilitary unit at the special economic zone was in no doubt about who was in charge and said his troops only responded with bullets after protesters began throwing rocks.

“Do we have to stand idle and get attacked at or what? My soldiers obediently follow my order. If I say “attention,” they are at attention, and if I say “stop,” they stop. Who is responsible when we say don’t throw at us, but they still did? Even you cannot stand it.”

The opposition has vowed to splinter the protest movement and carry it into the countryside where it hopes to agitate in smaller, harder to detect groups. Its boycott of parliament means those elected last July will probably not enjoy political immunity from prosecution
Hun Sen, however, still has his troubles. His own party has factionalized since his less-than-impressive performance at the last election and his attempt to promote his children and those of his allies above long standing rank and file members has caused serious divisions.

There is also speculation that Hun Sen will take the 55 CNRP seats won at the last election and redistribute them among the minor parties, including Funcinpec, the party it once shared a coalition government with. If that happens then Hun Sen may well have ended this country’s experiment with democracy, which although troubled has delivered it 20 years of unprecedented peace and economic prosperity.
Luke Hunt