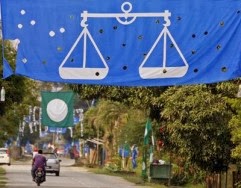 KUALA LUMPUR-The Home Ministry today banned a coalition of non-government organisations (NGOs) that was outspoken on human rights, alleging the majority of groups under its umbrella were un-Islamic and unregistered

In a statement from the ministry’s secretary-general today, it said the Coalition on Malaysian NGOs in the Universal Periodic Review Process (Comango) was promoting sexual rights contrary to Islam and that only 15 out of its 54 groups were legally registered.

“Any group which wishes to run legitimate activities in the country must be registered with the Malaysian Registrar of Societies under the Societies Act 1966 as set in under Section 7 of the Act,” said the statement here.

“Actions can be taken against any group which fails to fulfil the needs of the Section 7, as an unregistered and illegal organisation under Section 41(1) (b). Therefore, Comango is a ‘haram’ (illegal) organisation.”

The ministry claimed in its statement that Comango’s main goals include pushing for the Sexual Orientation and Gender Identity (Sogi), a term which refers to the rights of the lesbian, gay, bisexual and transgender (LGBT) minorities.

Comango has previously worked closely with the government in the Universal Periodic Review (UPR), a United Nations human rights peer review held every four and a half years.
Co-ordinated by Empower and human rights watchdog Suara Rakyat Malaysia (Suaram), Comango submitted its report in March 2013.

The report touched on issues such as the administration of justice; freedom of religion, expression and participation; rights to work, health and education; indigenous and migrants’ rights; and discrimination involving sexual orientation and race.

The coalition is made of 54 NGOs, which also includes women's rights group Sisters in Islam, Amnesty International Malaysia, Centre for Independent Journalism and Tenaganita.
Putrajaya has been under pressure from Malay-Muslim NGOs ― which have banded together under the name MuslimUPRo ― which accused Comango of challenging the position of Islam in Malaysia and spreading “liberalism teachings” backed by Western powers.

Spearheading the move was Islamist group Ikatan Muslimin Malaysia, which launched a nationwide campaign against the human rights recommendations made by Comango last month.
Called ‘Sejuta Ummah Tolak Comango’ (Community of a million rejecting Comango), the campaign included a petition, nationwide rallies which kicked off last November and the distribution of leaflets at mosques after Friday prayers.

The leaflets slammed Comango for allegedly calling for the freedom to renounce Islam; the protection of LGBT rights; the removal of Malay privileges; the freedom to embrace Shiah teachings; and the right for Catholics to refer to God as “Allah”, among others.

Malaysia had gone through the UPR last October to assess its human rights conditions.
In the process, some 19 countries, including Muslim-majority ones, asked Malaysia to sign one or more of the six core international conventions on human rights which the Southeast Asian nation has yet to ratify.

Malaysia first came under the UPR on February 2009, and consequently accepted 62 of the 103 recommendations issued by the UPR working group.

- See more at: http://www.themalaymailonline.com/malaysia/article/home-ministry-outlaws-comango-labels-member-groups-un-islamic#sthash.UbUAyaWe.dpuf
Posted by Kerry B. Collison at 1:05 PM