Abe not placating the right; he is the right 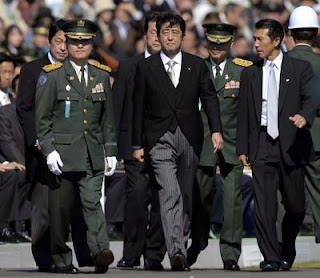 When people ask why Japanese Prime Minister Shinzo Abe decided to worship at Yasukuni Shrine against the advice of most of his advisers, one of the most common answers is that he is placating his right-wing supporters. Abe, say his supporters, ‘is not nationalist; he’s a pragmatist’. But a better view is that Abe is not placating the right; he is the right

Time and again, Abe has declared his ardent desire to go to Yasukuni, famously calling his decision not to go during his first term as prime minister his greatest regret. It is only because he has learned as a politician about the importance of appearances that he had restrained himself. Not going as prime minister had been a constraint induced by fears of foreign reaction, not an expression of his own heart.

Throughout his career, Abe has played a leadership role in several right-wing organisations. As the Washington-based Asia Policy Point has documented, Abe appeared publicly at least six times at events sponsored by the right-wing Gambare Nippon organisation of Toshio Tamogami. Tamogami was appointed Air Self-Defense Force Chief of Staff during Abe’s first term, and later forced to resign for writing an essay saying that ‘Japan was ensnared in a trap that was very carefully laid by the United States in order to draw Japan into a war’.

Shortly before his election as Liberal Democratic Party (LDP) President, Abe signed an ad in a New Jersey newspaper denying that Japan’s military forced Asian women to be prostitutes (‘comfort women’) during World War II. He has appointed as Education Minister Hakubun Shimomura, who argued in 2012 that Abe ‘should declare that the Nanking Massacre did not take place and the issue of comfort women does not exist. He should fully negate the Tokyo Trials historical viewpoint [that Japan committed aggression and war crimes in the 1930s–40s], and should also visit Yasukuni Shrine’. In his 2006 book, Toward a Beautiful Nation, Abe insisted that those deemed war criminals by the International War Crimes Tribunal are not war criminals under Japanese law.

Now Abe and Shimomura are trying to force schools to use textbooks that make concessions to the nationalists’ historical revisionism. In October, Shimomura ordered the school board in the town of Taketomi to use a conservative textbook it had rejected, the first time the national government has made such a demand. In November, the Education Ministry proposed new textbook screening standards that would require the inclusion of nationalist views of history, a proposal akin to including ‘intelligent design’ in American biology texts.

Abe’s dedication to this cause goes way back. Upon being elected to the Diet in 1993, he joined the LDP’s ‘History and Deliberation Committee’, which published a book in 1995 calling WWII a war for self-defence and denying that Japan committed war crimes like the Nanking Massacre and the forced recruitment of ‘Comfort Women’. One of the group’s top agenda items was a ‘textbook struggle’. In February 1997, Abe formed a group with similar views called the ‘Group of Young Diet Members for Consideration of Japan’s Future and History Education’, and became its executive director (‘Young’ was dropped from the group’s name in 2004). Half of his cabinet ministers are members; this cannot be passed off as youthful indiscretion.

Abe has a direct connection to Yasukuni Shrine, as pointed out by Professor Tessa Morris-Suzuki. ‘He [Abe] is a staunch believer in the values that the Shrine represents, and leads a cross-party group of parliamentarians known as the Shinto Association of Spiritual Leadership … As the Shrine’s own publicity makes clear, spirits of all fallen imperial soldiers (and some military auxiliaries and others) are enshrined there and worshipped as Shinto gods’.

The Association cited by Morris-Suzuki is the political wing of The Association of Shinto Shrines, as detailed by Japan correspondent David McNeil. The latter Association’s chief, Yutaka Yuzawa, the son of a former head priest at Yasukuni, says, ‘To us, Yasukuni Shrine is a god’. As for the war criminals venerated there, Yuzawa says, ‘Perhaps, according to today’s judgment, they might have made mistakes but back then they were doing their best for the country. In Japan, our way of thinking about the dead souls is that we don’t criticize them. They were protecting the emperor, and by extension the Japanese people’ (emphasis added).

The Association’s Diet wing is The Shinto Political Alliance Diet Members’ Association, a cross-party organisation that now includes 240 Diet members. The Diet Association’s Secretary General is none other than Abe himself, and 16 of his 19 cabinet ministers are members.

Although emperor-worship is a central tenet of state Shinto, today’s adherents seem more interested in the abstraction they call ‘the emperor’ than in the views of actual living, breathing Emperors. Hirohito, for example, stopped going to Yasukuni in 1978 after the Shinto priests who run it secretly entered 14 Class-A war criminals, including Hideki Tojo, into the rolls of the souls honoured there. In 2004, Hirohito’s son, Emperor Akihito, told Yonenaga Kunio, a member of the Tokyo board of education, that it was ‘desirable not to force’ teachers to raise Japan’s national flag or sing the national anthem in schools.

American apologists for Yasukuni falsely compare it to America’s Arlington Cemetery, since the latter includes Confederate soldiers. Abe himself picked up on this comparison when he spoke in Washington last year.

This is completely false. First of all, Arlington is a secular cemetery, not a religious shrine. Second, Confederate soldiers were not buried at Arlington — and a special monument to them not yet built — until 1900 when America’s leaders had turned their backs on the accomplishments of the Civil War; when the Supreme Court put its seal of approval on racial segregation; and when, in the name of ‘reconciliation’, American historians began to produce propaganda contending that the central cause of the war was not slavery but disagreements about tariffs and federal-state relations.

When Yasukuni was first built in 1869, its honourees did include those who died rebelling against the new modernising Meiji government in a futile attempt to maintain Japan’s ‘feudalism’. But Yasukuni’s meaning changed once its priests decided to venerate war criminals, including the general who oversaw the Nanking Massacre. It was only after their inclusion that China and South Korea began to criticise visits by Japanese prime ministers.

When they visited Japan in October, US Secretary of Defense Chuck Hagel and Secretary of State John Kerry pointedly laid a wreath at the Chidorigafuchi National Cemetery in Tokyo. Pentagon officials explained that this national cemetery for 350,000 unknown soldiers from World War II was Japan’s ‘closest equivalent’ to Arlington. Unfortunately, coverage in the Japanese press was slim.
Richard Katz is Editor at The Oriental Economist Report.
A version of this article first appeared in the January 2014 edition of The Oriental Economist Report.