Will 2013 Go Down as the Year The United States Lost China? 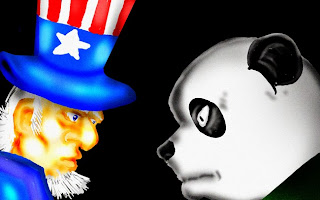 Having spent two days getting to know each other in Sunnylands, California, in June, Presidents Xi Jinping of China and Barack Obama of the United States sent each other Christmas gifts this year. Obama sent a B-52 bomber through airspace that China claims as its own; Xi then sent a ship from his new carrier group to cut a dangerous 180 meters in front of an American cruiser. Cool war heating up much?

The US and China have the most important bilateral relationship in the world. The rising global superpower and the status quo superpower are deeply cooperative and deeply competitive — at the same time. Hostile military gestures are part of that relationship, but so was the warm Sunnylands summit, to say nothing of separate trade negotiations each side is pursuing with the same Asian countries. In 2013, the year Xi called for “a new type of great-power relationship” between the countries, those contradictions deepened. The dangers of nationalism on both sides can be increasingly sensed. Hillary Clinton and other aspiring Democratic president0ial candidates had better pay attention — you can be sure that Bobby Jindal and other smart, aspiring Republican candidates are.

The pre-Christmas exchange of near hostilities is more important than has generally been realized in the US news media. The nominal trigger was a pile of uninhabited rocks in the East China Sea, known in Japanese as the Senkaku Islands and in Chinese as the Diaoyu. China claims the islands, which are 320 kilometers from the Chinese coast and 190 kilometers from Taiwan. Japan, also 320 kilometers away, not only claims the islands but also controls them. The traditional position of the US has been that it recognizes Japan’s de facto control without expressly taking a position on ownership.

One reason the islands matter is that they form part of a chain running from Japan to Taiwan to Vietnam, a line loosely parallel to China’s eastern coast, and thus relevant to its defense posture. But they are much more important for what they signal about China’s increasingly aggressive rise as a geopolitical power following its extraordinary economic growth.

China and Japan have been exchanging escalatory gestures around the islands since the summer of 2012. But this November, China officially claimed to establish an “air-defense identification zone” in an area of the East China Sea that includes the islands, meaning that the crew of any aircraft passing through must, according to the Chinese, say who they are, show national markings, and remain in two-way communication with Chinese forces. This was a new level of asserted control, and it could have been intended only to provoke confrontation with Japan, which had regularly sent American-made F-15 fighters over the islands.

In symbolic response, the US flew (unarmed) B-52 bombers through the air-defense identification zone, without providing any identification or communicating with China. The choice of the B-52s was itself symbolic. Fighter jets might have been construed as more up to date, but the hulking, stalwart B-52, in use since the 1950s, harkened back to the era of Cold War supremacy.

A few days later, Xi replied. An American missile-armed cruiser, the USS Cowpens, was in the South China Sea observing the first Chinese aircraft carrier, the Liaoning (it’s actually a repurposed former Soviet ship that is useful mostly for training and national pride). A craft from the Chinese battle group cut straight across the path of Cowpens, as close as 180 meters away. For ships that size, this certainly counted as a near miss. American officials called the maneuver “particularly aggressive.” Xi’s message to Obama was, pretty clearly, “you mess with us, we will mess right back with you.”

Signal and counter-signal are important reminders that economic globalization has not allowed us to magically transcend the possibilities of violent confrontation. Xi is in the process of consolidating power to a degree not seen by any Chinese leader in 20 years, cracking down on corruption within the Chinese Communist Party and on political dissent outside it. He has no intention of even gradual democratization. An important part of his consolidation strategy rests with the People’s Liberation Army, which respects him far more than it did his immediate predecessors. Xi needs to keep his senior officers happy.

What’s more, Xi’s ideological program rests on a potentially nationalist strategy for motivating supporters in what promises to be an era of slower economic growth. His slogan is “the Chinese dream,” and that dream goes beyond the individual to the nation as a whole, which aspires to be recognized globally as having international status on par with its economic importance.

Meanwhile, both American political parties found it convenient to be moderate toward China during the years of its rise, when the US was preoccupied in Iraq and Afghanistan and saddled with the aftermath of the 2008 crisis. How long can that last? “China’s peaceful rise” was a good slogan, but “America’s peaceful decline” doesn’t have much of a ring to it. Nationalism in the US may be a valuable political tool for Republican candidates who want to show that the Obama years involved foreign policy failures. That strategy will be especially appealing if Hillary Clinton is the Democratic candidate in 2016.

“Who lost China” is a phrase with deep roots in American politics. If the events of 2013 are any indication, we may hear it again.

Noah Feldman, a law professor at Harvard University and the author of “Cool War: The Future of Global Competition,” is a Bloomberg View columnist.