No way to treat a lady – the tragedy of Thailand 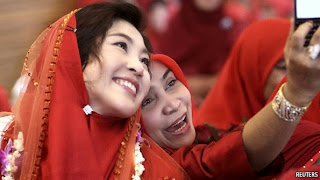 A country of beauty is in danger of turning into a beast. The Kingdom of Thailand, the land of the smiling people, the gorgeous countryside and a storied history as the once-upon-a-time Siam, now has a severe case of the political uglies. This constitutional democracy, anchored by a long-running monarchy, is in danger of heading down a fascist path

For America, the proper question is what if any is our place and role in the unfolding tragedy — what can we appropriately do to help?

To be sure, it would be illegitimate for the US government to intrude in any way into the politics of Thailand. Washington must accept any government that’s a legitimate and constitutional one.

But the many thousands of angry protestors in Bangkok, the capital city where the anti-government movement is boiling, are not marching for democracy but in effect for an end to it.

They are furious with the present government of Yingluck Shinawatra, the prime minister representing the party elected in 2011.

In effect, it is their position that the majority of Thais — many from the country’s sprawling rural regions — are not sufficiently educated to make decisions about the country’s governance and future direction. They would thus end the system of universal suffrage in place since 1933 and substitute an elitist, authoritarian system.

For her part, PM Yingluck has dissolved parliament and offered the electorate another chance early next year to make its national will known. Vote us out if you wish, she challenges: And it is precisely because it is likely that her party will win yet another mandate that the ominous cloud of further violence and possible coup continue to hover. To this, the US position should be clear and firm.

In view of the fact that no clause or article in the Thai Constitution authorizes the option of coup or assassination, America opposes violent or unconstitutional change and supports the Yingluck government until such time as the Thai electorate has otherwise spoken — but only through constitutional means.

The evil, noxious and revolting threat now in the air over Yingluck is deplorable. It threatens to undermine Thailand’s credibility in the world and its key role in Southeast Asia, where even Myanmar has been making strides toward more representative government.

The violent threats and salacious slurs being hurled against PM Yingluck and family (which have no merit and deserve no space in any civilized discussion or debate) have tended toward the malevolently
misogynist.

Yingluck is the chosen leader of the dominant political party in Thailand founded by, among others, her older brother Thaksin Shinawatra. It has never lost an election and Thaksin himself was ejected as PM in 2006 not via a recall election or any other civilized or constitutional method but by military coup to which, as far as anyone can tell, neither the King nor the Queen lifted a royal finger to discourage.

In the current crisis, the patented Yingluck style has been to respond to the anti-government street demonstrations in Bangkok with her quiet aplomb and patient willingness to engage all parties and discuss all issues. But the implacable opposition, revolving around the oddly named Democratic Party, will have none of that, and the PM has executed a graceful exit to meet and greet the party’s vast array of supporters and well-wishers in the populous, poorer northeast of the county, where her party is overwhelming popular, and where perhaps half the populace lives. This is a shameful way to treat an elected prime minister — man or woman.

There is no mystery about the vitriol toward her brother Thaksin, to be sure. He may be a modern political mastermind and dominant political-party guru that seemingly cannot lose a nationwide election.

But he has made very many enemies of the numerous Thai insiders he has outfoxed over the years, in part due to a sometimes-arrogant, headstrong style that he has come to recognize in himself and greatly regret as counterproductive.

But he has publicly accepted, as far back as 2010, in his first substantive public interviews, that his days as a Thai office-holder are history and that no further office would ever be sought.

Not surprisingly, however, this is not enough for the anti-Thaksin opposition, which views him as, in effect, the shadow PM, as he refuses to end his role (but perhaps understandably) as Yingluck’s older and always-full-of-advice brother.

Thus, the violent vitriol gets thrown at Yingluck, whose style of government has been anything but arrogant and whose personal ways have been above reproach.

Tragically, the current march of hatred by rightwing Black Shirt groups seems reminiscent of European-style, Mussolini-like fascist groups, foaming at the mouth and through their media with sickening spurts of misogyny, sexism and worse. Thailand — beautiful country that she is — must reject this darkness and embrace the enlightenment of accepting and including all citizens of all backgrounds into the continuing and vital process of framing its future.

One-person, one-vote democracy may or may not be the best of all possible systems; but it is the one indicated by the Thai Constitution, and the one deserving the respect and support of all decent Thais.

This, too, should be the position of the American people and its government.

Tom Plate, Los Angeles | is the author of the Giants of Asia series, of which Conversations with Thaksin (2011) was the third in the quartet. He is the distinguished scholar of Asian and Pacific Studies at Loyola Marymount University whose latest book In the Middle of the Future has just been published in Asia.