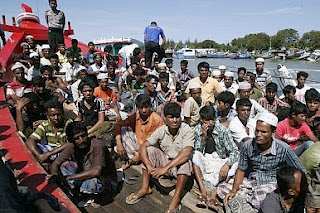 Despite the spat between Indonesia and Australia over spying allegations and accusations that Jakarta could do more to halt illegal immigration flows, a recent crackdown on people smuggling initiated by the recently elected conservative government in Australia has already had a dramatic impact.

The number of boat arrivals off Australia’s northwest coast has dropped significantly, as have claims for political asylum, even if the black market for illegal travel in Afghanistan is still thriving.

Here, middlemen acting for the likes of Abu Saleh, Abu Visam, Sayed Abbas and Captain Bram are doing a brisk business charging about $25,000 for fake passports, forged visas, and tickets into Southeast Asia or the Middle East, where boats are boarded to Australia, Europe and North America.

Prices have more than doubled since the industry took hold in the late 1990s. However, outlays and the logistical costs needed to bypass international police and immigration authorities have soared, exacting a toll on the bottom line for smugglers, whose business is all about profit.

“It starts here,” says a jeweler and pawn shop operator in Kabul’s famed Chicken Street. “Women often come in and pawn their earrings, rings, bracelets and necklaces. Family heirlooms can get them enough for at least one member of the family to make the trip.”

The voyage is dangerous and the vessels used often unseaworthy. Australian government sources said Saleh was allegedly responsible for one smuggling operation that went dreadfully wrong in September, ending in the deaths of more than 40 people.

Of the others, Captain Bram is a long-term operator based out of Indonesia, while the Australian sources say Abbas has been responsible for 40 separate smuggling attempts into the country over the past five years. Indonesia has refused an Australian extradition request for him. Meanwhile, Abu Vasim recently caused a furor after he refused to hand back money to passengers after several failed attempts to Australia.

These four are blamed for a slew of crimes involving Afghans, Sri Lankans, Iraqis, Iranians, a growing number of Syrians and others usually from the Middle East, prepared to gamble everything on illegal entry into Australia, Canada or Europe where they have been told, wrongly, political asylum awaits.

Reports about less savory elements among the crew and their demands are also emerging. One source from a Western non-governmental organization (NGO) said smugglers were extorting sexual acts from women with threats of not ferrying them to Australia. Hazing and bullying of passengers is common.

One passenger was dumped on an isolated beach after two crewmen placed bets to see who could make him cry first. Many of the crimes go unreported amid fears of retribution.

Typical routes include scheduled flights often through the United Arab Emirates and onto Thailand and Malaysia. In Kuala Lumpur passengers have traditionally transited through the suburb of Chow Kit, while there has been a shift into Bangkok over recent years where the Arab quarter along Sukhumvit is popular.

Both spots boast friendly hotels and cheap restaurants where smugglers can connect with their human cargo, collect more money and carry out final checks for the illegal boat crossing to Indonesia and then Australia. While thousands have made the journey, hundreds – perhaps many more – have been lost.

Authorities readily admit that boats ferrying passengers to Australia have gone missing and case files obtained by The Diplomat provides some insight into the tragedies that have befallen many.
One passenger claimed he had paid in full, the smugglers did not believe him and he was held hostage for more than a month. He was threatened with a needle containing a liquid, hanging and a homemade bomb. He handed over his passport, which was shredded, and he was left stranded.
Another passenger intending to claim asylum worked for seven years in a restaurant and saved $15,000, enough for a down payment on passage to Australia for his family. All were arrested while en-route, the smugglers refused to hand back their money and his family has also been left stranded in Indonesia.

But the biggest factor upsetting the lives of passenger and smuggler alike is the opening by the Australian government of detention centers in Nauru and on Manus Island in Papua New Guinea, which is providing alternative destinations as opposed to Australia via Christmas Island.

PNG and Nauru are least developed countries, isolated and offer few prospects. That change in course has resulted passengers pulling out at the last minute and demanding their money back.
“There are enormous financial pressures and the last thing the people smugglers are going to do is give back the fees they charged for Australia to passengers who in future will be redirected to PNG, they’re not that kind of businesspeople,” the Australian government source said.

From Manus Island and Nauru, illegal immigrants can apply for asylum or residency in a third country. Australia, however, is not an option and the wait for resettlement is fraught with its own difficulties as detailed by the United Nations High Commission for Refugees (UNHCR).
It has stated bluntly that the Manus Island facility does not meet required international protection standards. It lacks clean water, living conditions are cramped and extremely hot, and reports of assault, including rape, among inmates are common.

The NGO source said one Pakistani man was raped by six other men and “even though the people who run the detention centre know what is happening, the victim and perpetrators are still housed in the same area because there is nowhere else to put them.”

That detention facility, one former manager of Manus Island said, could not serve as a dog kennel.

But from the Australian government’s perspective the much harsher stance is working. At least 600 people have abandoned their plans of boarding a boat for Australia since Operation Sovereign Borders was launched in September after the conservative Liberal Party won national elections.

“That’s a result of the cooperative relationship between the AFP, other agencies here in Australia, and the Indonesian National Police,” Australian Federal Police (AFP) chief commissioner Tony Negus said.

His sentiments were echoed by John Stanhope, Christmas Island’s top bureaucrat, who said he believed the sharp slowdown in arrivals was the result of policy changes.

“It’s been very noticeable that the rate of arrivals has slowed,” Stanhope told local radio. “In terms of the nature of the flows it does seem like the new policies are having an effect.”

Complicating life further for passengers is that PNG lacks a processing system to determine asylum seeker claims. This is unlikely to change anytime soon, thus many are being left in legal limbo. That in turn has resulted in conflict between smuggler and his cargo, something Abu Visam has discovered.

His broken promises led to a wild brawl in mid-September in Cisarua, west Java, when two groups of Iranians demanded their money back from the Syrian smuggler after he repeatedly failed to deliver on a boat trip to Australia.

In Afghanistan, stories are emerging that mirror the plights of asylum seekers and illegal immigrants in Southeast Asia. According to an academic report undertaken at the American University of Afghanistan in Kabul, potential Afghan emigrants were being told to invent cover stories to validate asylum claims before leaving on legally obtained Afghan passports.

They then transit into countries where they are met by smugglers who provide forged passports and visas for Britain and Europe.

It said in this case study the asylum seeker lied and stated his father had fought against the Taliban militia and was kidnapped and killed. The body was then delivered to his family with a message that the son would also be killed, prompting the family to move to Kabul where lived with a grandfather.

But the Taliban still found them and resumed harassment of the family “… so with the financial support of my grandfather I paid a smuggler some money,” it said. Except for the paying of a smuggler the report was fabricated.

No one doubts there are thousands of genuine claims for political asylum, whether its Afghans, Iraqis or Syrians. About 60 percent of Afghanistan still suffers from the Taliban-run insurgency despite 12 years of fighting by U.S.-led forces, which are drawing down and are scheduled to leave next year.

But opportunities are dwindling and their problems are being exacerbated by fraudulent claims and the people smugglers who ply the high seas, control the illegal routes and for the most part have scuttled any chance of an automatic safe haven in countries like Australia. So while business worsens for the smugglers, their cargo will continue to be short-changed, or worse.
Luke Hunt for ‘The Diplomat’