The clash to come in Thailand 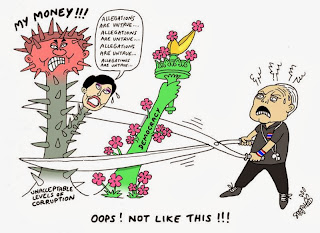 It is not clear yet, however, that the electoral process will restore stability any time soon to the country's tumultuous politics.

Suthep Thaugsuban, a former Democrat party parliamentarian and leader of the anti-government People's Democratic Reform Committee (PDRC), has insisted throughout his one-month long street campaign to topple Yingluck's elected government that democracy should be temporarily suspended in lieu of a royally appointed "People's Council" tasked with implementing democratic reforms.

Yingluck and her deputies have maintained that an appointed government would violate the constitution and go against the popular will that elevated her Peua Thai party-led government to power in convincing fashion at mid-2011 elections. Democrat Party-aligned protest leaders have countered that her government has abused its democratic mandate and lost its legal legitimacy, including most prominently through the passage of a controversial amnesty bill on November 1.

Widespread protests against the amnesty bill rallied on the notion it aimed ultimately at absolving Yingluck's self-exiled elder brother and former premier Thaksin Shinawatra of his corruption-related criminal conviction and restoring his court-ordered confiscated wealth. Yingluck's agreement to withdraw the bill failed to defuse the street movement, which has since morphed into a wider call to permanently purge Thaksin's and his family's influence from politics.

Suthep has maintained that new elections, which his aligned Democrats would in most likelihood lose, will not resolve the political impasse. That sets the stage for a potential Democrat boycott of Yingluck's announced new polls. Such a strategy would be similar to the party's decision against fielding candidates at April 2006 snap elections called by then premier Thaksin to relieve similar protest pressure against policies perceived as serving his personal rather than national interests.

The 2006 polls were declared "undemocratic" by King Bhumibol Adulyadej and later ruled "invalid" by the Constitutional Court because Thaksin's Thai Rak Thai party failed to win a legally required 20% of the vote in Democrat-dominated southern constituencies. In that political vacuum, Thaksin was ousted as caretaker prime minister in a September 2006 military putsch - one month before new polls were set to be held - on coup-maker allegations of abuse of power, corruption and disloyalty to the throne. Thaksin has consistently denied those charges.

Whether the royalist military would be willing to launch a similar intervention in the current political impasse is a wild card. Army commander General Prayuth Chan-ocha has so far played a conciliatory rather than agitating role, including his extraordinary call for and oversight over a meeting between Yingluck and Suthep to discuss and resolve their differences. That meeting ultimately failed to achieve a compromise, but did act to position Prayuth as a potential future mediator of last resort.

To keep the military in its barracks, Thaksin's aligned United Front for Democracy Against Dictatorship (UDD) protest group, known broadly as "red shirts", dissolved its gathering in support of Yingluck after protesters and pro-PDRC students lethally clashed around Bangkok's Ramkhamheang University. The UDD announced today it would cancel a mass rally scheduled for Tuesday in Ayutthaya province after Yingluck's early-election announcement, but will undoubtedly mobilize to resist any perceived extra-constitutional dissolution of Yingluck?s now-caretaker administration. .

Judicial coup, take two
Some political analysts believe a judicial intervention - similar to the court decisions that bumped two Thaksin-aligned governments from power in 2008 - could yet be on the cards. A Constitutional Court decision last month ruled that Peua Thai's attempt to change the Senate from a partially appointed to fully elected body through constitutional amendment was illegal. Different groups have since filed petitions with the National Anti-Corruption Commission (NACC) to impeach and criminally convict 312 Peua Thai MPs, including Yingluck.

Peua Thai publicly rejected the Constitutional Court decision, and by extension could refuse to abide by any NAAC ruling that removes them from office while a final court ruling is pending. Such a scenario, some royalists suggest, could see the military step into the fray in the name of upholding the rule of law. Prayuth has frequently spoken in recent weeks, seemingly for the first time, about his personal commitment to rule by law and against a general amnesty.

Suthep, who now faces murder charges for his role in the 2010 lethal crackdown on UDD supporters, has championed the idea of a royally appointed People's Council, but it is unlikely that the idea originated with him or his affiliated Democrats. Senior party members, including former finance minister and likely future party leader Korn Chatikavanij, were initially caught unaware of Suthep's conception of a People's Council when he first broached it on the PDRC's protest stage.

Critics say that raises questions about whether the idea of a People's Council has been imposed on the party from higher royalist quarters. It's not the first time prominent royalists have pronounced their preference for an appointed government to replace an elected one.

In the lead-up to the 2008 court-ordered dissolution of Thaksin's brother-in-law Somchai Wongsawat's government, a People's Alliance for Democracy (PAD) protest leader suggested that the Constitutional Court and other high court judges had considered the creation of a "Supreme Council" to fill the expected political vacuum to be left by its ruling. Then, royal advisory Privy Councilor and known palace favorite Palakorn Suwanarat was reportedly tipped to serve as the Supreme Council's appointed premier.

Through military power-brokering and defections from Thaksin's party, the Democrats eventually formed a new coalition government led by Abhisit Vejjajiva. That administration was vigorously resisted as "anti-democratic" by Thaksin's red shirts, who employed many of the same debilitating protest tactics now being carbon-copied by Suthep's PDRC. Now, with the Democrats resigning in unison from parliament, the party will not be eligible to form a caretaker government should Peua Thai's MP's be found guilty by the NACC.

According to one international mediator, the NACC has fast-tracked its investigations and could rule in the coming days. Some royalists reckon that could open a political and legal vacuum that allows for the formation through court order of a royalist People's Council. Behind-the-scenes moves are being made in that direction. One list of proposed People's Council members reviewed by Asia Times Online bids to balance known royalists with once-Thaksin allies who switched political sides after the 2006 coup.

In August, Yingluck launched a political reform forum comprised of a different set of less-royal political elders in response to opposition criticism of her government's rule. The Democrats, PAD and other anti-Thaksin groups declined to participate in the forum, on charges it lacked independence and aimed to distract attention from her administration's alleged corruption and mismanagement. Any hope for Yingluck's forum to implement political change and achieve reconciliation was dashed with Peua Thai's controversial passage of the amnesty bill on November 1.

Before the push for amnesty and constitutional amendment, Yingluck had maintained a relative balance between pro-Thaksin Peua Thai politicians and anti-Thaksin royal establishment forces in the bureaucracy and military. That stability, it turns, was predicated on Thaksin remaining in self-imposed exile. Even so, it was never clear that the army-backed royal establishment would trust a Thaksin-aligned government to rule during the delicate royal succession from King Bhumibol to heir apparent Crown Prince Vajiralongkorn.

The 86-year-old monarch's national birthday address on December 5 made no mention of recent political convulsions, but served as a reminder that Thailand is in the twilight of his reign. So, too, does the royalist opposition's proposal to replace Thaksin-dominated electoral democracy with a period of rule by royalist appointees. While both sides maintain the righteousness of their positions, without a compromise a clash of yet unseen magnitude seems inevitable in the weeks ahead.