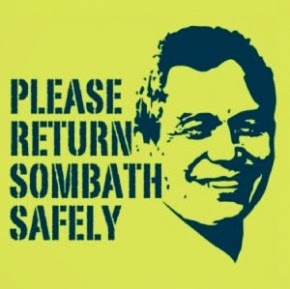 The last sign of Sombath Somphone, the most famous social activist in Laos, is a blurry video taken on a Vientiane street.The video shows Sombath, 61, being stopped at a police post on December 15 last year. He is seen being led into a pickup truck, which then drives off screen and disappears

A year on, rights groups and Western governments are calling for Laos to fully investigate Sombath's disappearance, which Amnesty International says reeks of an official cover-up. The case has become a headache for the Communist country as it seeks international respectability and to open its economy.

The landlocked, impoverished country has experienced economic growth of more than 8 percent in recent years.

It is seeking to become the "battery of Southeast Asia" by exporting electricity from hydropower plants, but it has come under criticism for environmental destruction, land grabs and wasteful resource exploitation.

Now a deep freeze has descended on a tiny civil society that has tried to bring more openness to the tightly controlled state that has little tolerance for dissent.

Sombath's disappearance has sent a chilling message to others who want to debate and share ideas around human rights and development in Laos. Sombath was no radical dissident. The agriculture expert was well known for work promoting sustainable development for the rural poor.

One of his last acts before disappearing was to help organize the Asia-Europe People's Forum in October, a conference including international organizations that was carried out with the blessing of the foreign ministry.

But rights groups believe Sombath must have annoyed someone powerful within the government or ruling party, although the government as a whole has not been fingered for his disappearance.

The Lao government has accepted a series of delegations of parliamentarians from Europe and the Association of Southeast Asian Nations but has rebuffed all offers of international assistance in investigating the case.

Those involved in working with NGOs in Laos say the government has imposed a greater administrative burden on groups. A cabinet meeting in January passed a vaguely worded resolution to rein in organizations deemed to be undermining the country by "peaceful means".
Anne-Sophie Gindroz, the former Lao country director for Swiss development organization Helvetas, who was expelled from the country a week before Sombath's abduction, said "a climate of fear" has dampened efforts to stop rampant land grabs.

Before Sombath's disappearance, many thought Laos had opened up to the world. But when he went, they realized Laos had turned back 20 years into the past. Reuters