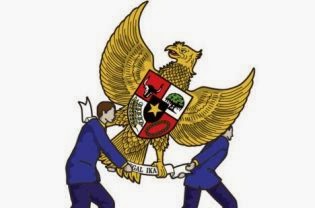 Indonesia may not be on the verge of becoming an Islamic theocracy, but it certainly has lost its credentials as a model for Muslim democracy.

In the years following the downfall of Soeharto in 1998, persecution against minority groups intensified with the government largely seen as guilty of complicity in many acts of bigotry — at least by omission.

The trend, sadly, did not change in 2013, with several Christian groups still facing hurdles in building churches, Ahmadis nationwide still banned from practicing their faith publicly and dozens of Shiites in Sidoarjo, East Java, still unable to return to their homes in Sampang, Madura, after more than a year of being displaced in their own country.

Overall, 2013 has been another bad year for pluralism.

The core of the problem persisted: the government failed to comprehend the basic idea of human rights, of what it means to be free to practice what you believe in, as stipulated in the 1945 Constitution.

It kept confusing freedom of religion with appeasing the majority (or the Muslim radicals, to be more exact) in the name of “respecting other people’s beliefs”. That is why whenever a religious conflict occurred, the government’s default stance would be siding with Sunni Muslims.

The government’s bias in its efforts to resolve religious conflicts could not be more obvious in 2013. In August, the government was accused of supporting the forced conversion of Shia followers to Sunni Islam in a reconciliation program it ironically claimed was meant to end the conflict between the two Islamic denominations in Madura.

According to Hertasning Ichlas, executive director of Universalia Legal Aid Institute (YLBH Universalia) and an attorney for the Sampang Shia community, Religious Affairs Minister Suryadharma Ali and a fellow United Development Party (PPP) politician Djan Faridz attended meetings where the Shiites were allegedly forced to renounce their faith if they wished to return home.

Hertasning claimed that 34 out of around 235 Shiites evicted from Sampang returned to their homes after signing a pledge of nine points, including a willingness to return to “the true teaching of Islam” as well as to condemn the teachings of Shiite cleric Tajul Muluk, who is now in jail on blasphemy charges.

Tajul was indicted for blasphemy after a mob accusing him of spreading heretical teachings burned down his pesantren (Islamic school) in December 2011. In July 2012, he was found guilty by the Sampang District Court of defaming Islam by telling his followers that the current Koran was not the original version, and that the true Koran was still in the hands of Imam Mahdi. The verdict was followed by a mob ransacking his and his followers’ houses, an attack that killed two Shiites.

Suryadharma denied the accusations, saying the government was only trying to “enlighten” the Shia members. “I never forced them to convert to the true teaching of Islam. I never used words like ‘repent’ or ‘conversion’. Expressions I used [in reconciliation meetings] were ‘enlightenment’ and ‘alignment of perception’,” he said.

The minister may be telling the truth or just playing with semantics. In any case, most of the Sampang Shiites remained in limbo and unable to live normal lives. The case is far from being resolved.

The Ahmadis, whose beliefs are considered deviant by the Indonesian Ulema Council (MUI), continued to endure persecution. In May, for instance, unknown assailants attacked an Ahmadi hamlet in Tenjowaringin village, Tasikmalaya, West Java. Twenty-nine buildings were damaged in the attack, including a mosque, a mushola (small mosque) and an elementary school.

Amid persecution of the Ahmadis, the Religious Affairs Ministry in September granted Rp 1.2 billion (US$100,987) to 880 former Ahmadiyah followers in Tasikmalaya, in what could be seen as an example of the government’s blatant favoritism for mainstream Sunnis.

Meanwhile, some Christian groups were still finding it difficult to have a church of their own. In March, Batak Protestant Church (HKBP) Taman Sari members in Bekasi, West Java, could only watch as officials demolished their unfinished church based on permit issues.

In the same month and in the same regency, the local administration banned congregation members of the Indonesian Christian Church in Gembrong (GKI Gembrong) from conducting services at their church in Jatibening Baru.

With religious violence virtually becoming the norm in Indonesia, a country that has often touted itself as a model for Muslim democracy, a number of local and international human rights groups issued damning reports highlighting the country’s failure to protect minorities.

The government played down the reports, saying that foreign observers were “narrow-minded” and that the Ahmadiyah and Shia cases should not be used to gauge the country’s achievements. Indonesia, government officials claimed, was making progress.

To prove its point, they highlighted the fact that this year President Susilo Bambang Yudhoyono was given an international award in recognition of his achievements in promoting tolerance in the world’s most populous Muslim nation. The award, given by the Appeal of Conscience Foundation, a Jewish group, was ironic and even insulting to victims of religious violence, activists said.

The latest events regarding pluralism in 2013 were no less disheartening. On Nov. 26, members of the House of Representatives agreed to retain a provision in the Civil Administration Law that said the state recognized only six religions: Islam, Catholicism, Protestantism, Buddhism, Hinduism and Confucianism. Subscribers of indigenous beliefs will therefore still be barred from stating their faith on identification cards, a policy that has led to various kinds of discrimination against them.

With the elections next year, the future looks grim for Indonesia’s pluralism. But it is too soon to lose hope.

A bomb that exploded inside the Ekayana Buddhist Vihara in West Jakarta, injuring three and destroying parts of the site, failed to trigger a bigger violence in the country. The incident, the first in years, took place four days before Lebaran and at a time when the extremists were calling for revenge attacks on local Buddhists in relation to atrocities perpetrated against Muslim Rohingyas in Myanmar. Their calls went unheeded as both local Buddhist and Muslim leaders called for restraint.

The small but uplifting victory of Jakarta Governor Joko “Jokowi” Widodo over several local extremists demanding the removal of a Christian subdistrict head simply because she was Christian is also of note.

The governor stood his ground in the face of intolerance and the people stood behind him, giving hope that rising intolerance does not simply mean the end of tolerance.

In 2013, pluralism was badly wounded, but it did not perish. Its defenders must continue to stand up and speak louder and louder to ensure it remains alive next year. Ary Hermawan, The Jakarta Post,