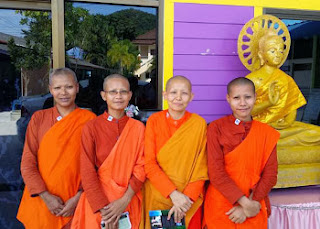 Has its time come?

But even with general acceptance about the emerging importance of the matriarchal role of women in society today, there is still one last bastion – the Buddhist monkhood, something that has been strictly taboo for women in Thailand for the last seven centuries. Although women were given the right to vote back in 1932, they were never given the right to ordination as monks.
There is nothing in the Thai constitution forbidding women becoming monks. However the governing Sangha, or ruling religious council, continues to maintain, based on 1928 rules, that only men can enter the monkhood. The Theravada Bhikkhuni order, or fully ordained female ministry, has never been officially established in Thailand, although it exists in both Myanmar and Sri Lanka.

There is a growing movement to seek ordination for women, however, in a religion that appears to sorely need it. The male-dominated Buddhist religion in Thailand is in crisis, reeling from a series of sexual and other scandals including that of the 33-year-old Wirapol Sukphol, who shocked the county in July with daily stories of lavish excess, promiscuity and alleged crimes ranging from statutory rape to manslaughter. In 2011, monks were exposed for donning wigs and attending karaoke bars for donning wigs and attending karaoke bars while others were charged with rape, phone sex and one was charged with murder and dumping the woman’s body in s rubbish bin.

The absence of women in the ministry over the past century has led to the perception among many Thais that women are not meant to play a monastic role in life other than being lay followers, or becoming Mae Ji or nuns. Although a Mae Ji is higher than a lay person, this place within the monastic hierarchy is regarded as subservient to monks. In addition, monks receive free public transport, reserved seats in public places, and government identity cards, which Mae Ji, just aren't entitled to.

This restricts women in the monastic hierarchy to only participating in activities of obtaining merit through collective rituals and undertaking temple housekeeping activities. Basically the perception is that they are there to serve the monks.

A common perception is that while they are robed in white, women are most probably present in the temple because they have no other place to go, suffer from a broken relationship, have a psychotic disorder, or have very little education. Consequently robed nuns tend to be looked down upon out of a too-general belief that women are of less value than their male counterparts in monastic life.

A small number of women who have become Mae ji aspire for full ordination, even though that would potentially make them official social outcasts in risk of civil prosecution for impersonating monks.

Nonetheless, some women have dared to break the gender barrier despite the risk of opprobrium. The pioneer who led the way for women to be ordained as monks was the professor, controversial author and TV host Chatsumarn Kabilsingh, now known as Dhammananda Bhikkhuni. She is the abbess of Wat Songhammakalyani in Nakkon Pathom, just north of Bangkok. Dhammananda Bhikkhuni slipped away to Sri Lanka back in 2001 to return an ordained monk, a very controversial move at the time.

Wat Songhammakalyan has differentiated itself from male dominated monasteries in that the Bhikkuni have developed strong rapport with the communities around them, and an exemplary empathy and ability to address the needs of the local residents. The bhikkuni directly engage the community, not just helping in their spiritual needs, but rendering assistance in many other ways, especially to the needy, sick, and infirmed. The Bhikkhuni were there giving assistance when floods hit their community a couple of years ago.

According to Dhammakamala Bhikkhuni, wherever and whenever people come into contact with the Bhikkuni, they very quickly become accepting and are generally happy to see them. Many of the male Sangha now also accept the Bhikkhuni and in some parts of Thailand it is now not unusual to see male and female monks jointly participating in prayers and other rituals.

Over a number of visits to Bhikkhuni temples, stark differences emerge in comparison to conventional temples. The Bhikkhuni seem to share a much stronger sense of community, than their more individualistic male counterparts. There also seems to be a strong sense of mission about what they are doing. Although the dhamma, or scripture espoused is along the similar modernist themes as Sulak Sivaraksa, Thich Nhat Hahn, and Buddhadasa Bikkhu, the Bhikkhuni's method of practice and dissemination is very different. There is warmth, empathy, and "a sense of personalization" in their approach to counseling and teaching of dhamma.

The Bhikkhuni have a nurturing approach based upon their various personal experiences before they were ordained, which has given many of them the ability to frame dhamma teachings in a practical way, which can be easily understood by people. The Bhikkhuni have managed to take scripture and turn it into something pragmatic that can be understood and used as "everyday dhamma", or socially engaged Buddhism.

According to Dhammakamala Bhikkhuni, the most important contribution the Bhikkhuni are making is their open approach to issues concerning women that are very difficult for males to discuss with females. This is very important as around 90 percent of people visiting temples for dhamma instruction are now females. The Bhikkhuni see gender as an essential bridge to women.

The Bhikkhuni are heavily involved in family counseling, assisting in solving everyday problems that are facing people in society today, particularly in regards to child and family issues. They are enabling dhamma to be used as a means to live by for the benefit of the individual, family, and community. Many supporting the case of the Bhikkhuni in Thailand believe that it is this group who are maintaining contemporary relevance of dhamma to everyday life. In this way the Bhikkhuni are performing a major role in maintaining Buddhism as a useable guide to everyday life.

With many of the Bhikkhuni coming from professional and higher education backgrounds, many modern teaching methods have been adopted to help disseminate dhamma teachings to the young within communities and schools around their temples.

The Bhikkhuni appear to be realists and have not relied upon donations to survive. They are not totally dependent on outside food donations and grow some of their own food. They even engage in enterprise and sell their surpluses. Practicality, self-reliance, and a collective action orientation are signatures that the Bhikkhuni display to the rest of society in the manner of their dealings with outsiders. This manifests itself in an aura of strong will and motivation that is inspiring to many of those who come into contact with them.

There have been a number of scandals involving male monks of late, creating a small crisis in public trust. In addition, a large part of the Sangha is focused on doctrine and tradition, rather than the needs of their followers. Some would argue that if things don't change the Sangha may only be able to play a more limited role in society in the future, perhaps just restricted to performing the rites and rituals on formal occasions.

The Bhikkhuni approach to dhamma may be able to rebuild trust and maintain the relevance of Buddhism to society.

What appears to be one of the important aspirations forwomen who want to be fully ordained as monks is to be ordained in Thailand in front of their peers, rather than run away to another country and then return to proclaim themselves as Bhikkhuni. This is now possible where a member of the Sri Lanka Sangha travels to Thailand for the ordination and a number of Thai Bhikkhu or male monks are willing to make up the necessary quorum of five Bhikkhu being present at the ordination. They feel it is symbolically important that ordinations are carried out in Thailand.

The Bhikkhuni struggle highlights gender discrimination in Thailand. As a farang or westerner, it would be too tempting to interpret what Dhammakamala Bhikkhuni told me during our interview as an expression of feminism. However, their aspirations probably more likely have something to do with their feeling of the need to serve society in the way they believe is best. The Bhikkhuni's commitment to the cause of developing a strong Bhikkhuni Sangha in Thailand has more to do with a personal commitment to love and compassion towards the community around them, their love of the dhamma, and humility, rather than the expression of any political or social statement.

There is no anger present among the Bhikkhuni. Rather they seem to employ empathy and compassion as their driving energy. They see their devotion to their cause as the important thing, and official recognition is not their highest priority. Dhammakamala Bhikkhuni probably best sums their feelings up when she said "we don't ask for what can't be done right now".

The ordination of Bhikkhuni has not been a major issue of discussion for over a decade. However with the regular ordination of women occurring in the near future, a planned ordination is scheduled for Nov. 29, 2014, it is likely that the issue will be debated once again. The biggest barrier to the ordination of women may lie in that it is a total affront to what is, and consequently seen as a threat to the establishment, which has existed under the same structure for over a century. Consequently conservatism rules to maintain the status quo rather than consider 'what could be'.

Institutionally, the only consolidation is that the current small number of Bhikkhuni are generally left alone and have not been prosecuted.

However Buddhism in Thailand according to some needs some revitalization and effort made to regain the confidence of the people after some of the scandals of late. The whole question of getting the dhamma across to a rapidly changing society needs a rethink. This requires some reconsideration about the entry of women to the Sangha or monkhood.

If Thailand is going to retain its leadership in the development and dissemination of dhamma, then it needs to appeal to all segments of the populace. These are challenges facing the Sangha Council which must address the institution of Bhikkhuni to maintain its relevance to society and prevent itself from becoming an institutional relic.

Unrecognized and unacknowledged women monks are at the forefront in dealing with Thailand's social problems, if even on the small scale, while many of their male counterparts have withdrawn themselves from society to stay within Thailand’s temples of Thailand.

Ironically this issue appears to be as hard to solve as the ongoing political turmoil playing out on the streets in Bangkok. However the Bhikkhuni have a secret weapon with their charm and devotion that is winning the hearts and minds of many who come into contact with them.

The emergence of the Bhikkhuni phenomenon is a strong wind of change blowing across both the social and spiritual aspects of Thai society. Society may not be able to resist this idea, as its time may have come. Thailand is changing quicker than many would want to acknowledge. ‘Asia Sentinel’