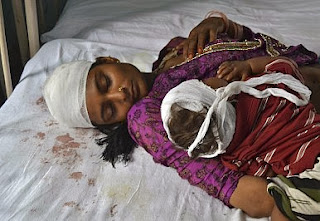 The following is an edited extract from Ram Mashru’s excellent new book Human InSecurity: Fear, Deprivation and Abuse in India. It is reprinted with permission.

Uttar Pradesh (UP) is India’s most populous state. Home to 199 million residents (16.5% of India’s population) the state is as big as Brazil. India’s national rural-to-urban ratio is 2:1, lower than UP’s where there are 3.8 people living in rural areas for every 1 in towns and cities.

Furthermore Muslims, who make up around 13 percent of India’s population, represent 20 percent of UP’s inhabitants, with the proportion rising as high as 45 percent in some western parts of the state. It is in the context of these extraordinary demographics that the recent bloodshed in the state, between Hindu Jats and Muslims, needs to be understood.
Muzaffarnagar, a small city in the prosperous “sugar belt” of UP, became the epicenter of the riots in the worst case of communal violence India has seen in over a decade. Not since 1992, when Hindu mobs tore down the Babri Masjid – a 16th century mosque said to be built on the ruins of an ancient Hindu temple – has UP witnessed such large-scale ethnic violence.

On August 27, 2013 three men, one Muslim and two Hindu, were killed in the village of Kawal when fights broke out over the alleged harassment of a Jat girl. Days after the triple murder a “grand assembly” – mahapanchayat – was organized in Muzaffarnagar by Hindu Jats to discuss the safety of their women. Videos recorded at the meeting show local politicians making incendiary speeches inciting attacks against Muslims. The violence flared on September 7 when, according to reports, Muslims pelted stones at those leaving the assembly. By mid-September – after days of looting, arson, beatings, rape and murder – as many as 55,000 had fled their homes, hundreds had been injured and close to 60 lives were lost.

Though the violence has ceased, the riots have spilled over into a humanitarian crisis. Of those that escaped tens of thousands have taken shelter in makeshift refugee camps inside mosques and religious schools. The government responses, at both the state and federal level, have been criticized as woefully inadequate. No efforts have been made to build shelters, provide necessities or resettle the displaced, leaving them dependent on handouts from locals. On September 16, flanked by cameras and journalists, the triumvirate of the ruling Congress party – Prime Minister Manmohan Singh, Party President Sonia Gandhi and heir apparent Rahul Gandhi – swept into Muzaffarnagar for a few hours to hear local grievances. Their visit amounted to nothing in the form of relief. In November, UP’s Chief Minister, Akilesh Yadav, appeared on national news channels urging people to return to their homes. But months later those who fled riot-afflicted areas are too afraid to go back or have nothing to go back to.

The timing of the riots is the biggest cause for concern. India is preparing for next year’s general election, in which citizens face an increasingly polarized choice between the incumbent, socialistic Congress party and the Bharatiya Janata Party (BJP), India’s right-wing Hindu-nationalist opposition. UP – with 80 MPs, the most of any state – is the constituency in which the fortunes of both parties will be decided. With a history of communal tensions being stoked to consolidate votes, as the electioneering becomes more aggressive many fear the state will become a tinderbox.

The History of Ethnic Conflict

India, as a nation-state, was born of ethnic violence. The bloodshed that followed Partition claimed as many as 1 million lives. But the communal violence that recently tore through UP is very different in kind to the inter-ethnic conflict of pre-independence India.

According to Christopher Bayly, a professor of colonial history at the University of Cambridge, in the 18th and 19th centuries relations between Hindus and Muslims were syncretic. Outbreaks of violence that disturbed this harmony were territorial “land wars.” Distinct religious and cultural identities only emerged in the late-19th and early-20th centuries, when inter-ethnic conflict was tied to economic and political change: struggles for office, representation and access to resources. In their report on inter-ethnic violence between 1947 and 2003, Delhi’s Institute of Peace and Conflict Studies similarly found that upturns in communal incidents correlated with major shifts in Indian politics such as the rise of Hindu nationalism as an electoral force and the emergence of parties representing minorities.

After Indira Gandhi was assassinated by a Sikh bodyguard in 1984, Hindus led a massacre of Sikhs across the north of the country killing more than 3000 people. The trials of Congress politicians, accused of aiding and abetting the massacres, are still ongoing. More recently a pogrom led by Hindus against Muslims in Gujarat in 2002 claimed as many as 2000 lives. Widely believed to be a concerted act of ethnic cleaning, the slaughter took place under the watch of Narendra Modi, then the Chief Minister of Gujarat and now the BJP’s Prime Ministerial candidate. These communal ghosts still haunt Indian politics, and this history has forced itself onto the agenda of next year’s election.

The Politics of Communalism

Politicians from all parties in India have benefitted from playing on identities. As a strategy it consolidates voters along cultural lines, affirms loyalties and forces floating voters to pick a side. The BJP, along with a host of young caste-based parties, has reaped huge rewards at the ballot box with communalist campaigns. Accusations that Narendra Modi stood by and watched as Muslims were being slaughtered did not diminish his electoral successes: after the 2002 massacres he was re-elected as Chief Minister of Gujarat three times. Nor has the charge of having Muslim blood on his hands hampered his prime-ministerial ambitions, with polls naming him the likely victor in next year’s general election. In UP the BJP reached the zenith of its popularity after the Babri Masjid was razed in the 1990s, and since then party’s electoral fortunes have waned. In the 1998 general election the party returned 57 MPs from the state; in 2009 it returned a mere ten. In a clear signal of its designs in UP the BJP have installed Amit Shah, an apparatchik implicated in the 2002 genocide, in the state to turn the party’s electoral prospects around.

For many the Muzaffarnagar riots forewarn a return of the politics of polarization. For Zoya Hasan, one of India’s foremost political scientists, the riots were a case of “communal mobilisation for political gain,” and she, along with many others, has placed the blame on the Sangh Parivar – a bloc of ultra-nationalist organizations allied to the BJP. Militant Hindu outfits like the Bajrang Dal and Rashtriya Swayamsevak Sangh have a history of instigating attacks against Muslims and were present in UP when the riots broke out.

Between the triple murder on August 27 and the outbreak of violence on September 7, the police in Muzaffarnagar failed to prevent the situation from deteriorating. The mahapanchayat went ahead despite the police imposing a ban on assemblies under section 144 of the Criminal Procedure Code, and footage of local officials encouraging attacks on Muslims – a crime under laws prohibiting incitement – show listless police standing idle in the audience.

Many facts about the riots suggest either gross state negligence or collusion. At the behest of administrators several senior police officials, tasked with diffusing tensions, were transferred in and out of the area in quick succession. According to eyewitnesses police stood by as attacks against Muslims raged. At first the police insisted they were overwhelmed, but after it emerged that the troop deployment was hugely insufficient – numbering in the mere hundreds – Devraj Nagar, the Director General of Police in UP, admitted to operational “lapses”.

Since the riots, 20 special investigation teams have been dispatched to probe cases and several hundred criminal reports have been filed, naming 700 people accused of murder, rape, rioting, looting, provocation, property destruction and unlawful assembly. Hundreds of arrests have been made and court proceedings have begun. On October 30 a further communal incident, in which four died, sparked an unprecedented security response: large numbers of police, military and paramilitary troops were deployed to prevent a further conflagration.

Whilst the speed and success of the October 31 response suggests some lessons have been learnt, the treatment of communal violence as a problem of law and order has left the social drivers unaddressed. The glaring hole in India’s anti-communal policy according to Ashutosh Varshney, a Professor at Brown University, is the failure to build durable inter-communal bonds.

But progress on building cross-cultural bridges has been hindered by policy inertia. Despite being cleared by a parliamentary select committee in 2006, reviewed in 2010 and redrafted in 2011, the “riot act” – the Prevention of Communal and Targeted Violence (Access to Justice and Reparations) Bill – has yet to be enacted.

Instead, officials have offered predictable placatory signals. Manmohan Singh, India’s prime minister, promised to hand down “the strictest possible punishments” to those guilty of rioting whilst Pranab Mukherjee, India’s president, assured the public that action would be taken to ensure the police would learn from their mistakes.

Protection from direct and structural violence is central to human security. The inter-ethnic violence, social breakdown and state neglect witnessed in UP was a tragic example of communal insecurity. Hostile environments and broken communities exacerbate individual vulnerabilities, and individuals are best protected if the communities in which they live are secure.

Speaking on the obstacles faced by pro-democracy activists in Burma, Aung San Suu Kyi said, “Freedom from fear does not have to be complete, it only has to be sufficient to enable us to carry on.” Historical grievances, social and economic marginalization and cultural clashes all predispose India to communal conflict, but a great deal can be done to avoid violence and minimize harm.

Communal violence must be understood on two levels: horizontal and vertical. Solving the former – violence between individuals – requires the state to engage in the long-term process of building inter-community ties. The vertical dimension however, between the state and individuals, however, can and must be addressed immediately. Remedying the loss of property, rebuilding homes, providing relief, investigating cases, police reform, intelligence training and reconciliatory mechanisms (fast-track courts or truth commissions), are all easy and obvious measures that can restore faith in the state and rebuild communities devastated by violence.

In October a coalition of political parties organized the Convention Against Communalism, ostensibly to condemn the government’s record on inter-ethnic cohesion. The fact that many interpreted the convention as mask for the formation of a third political front, which would challenge India’s two main parties in next year’s election, exemplifies the potency of communal relations as a political issue.

Sunil Shinde, India’s Home Minister, told journalists in September there had been 451 recorded communal incidents so far in 2013, more than 2012’s total of 410. These figures confirm the findings of Steven Wilkinson, a Professor of South Asia at Yale, that upturns in inter-ethnic violence are directly linked to electoral competition. Many are resigned to the fear that things will get worse before they get better.

Ram Mashru is a commentator and researcher specializing in the politics, international relations, human rights and economics of South Asia. ‘The Diplomat’