In the Philippines 4 million families own nothing. Top 40 own everything. And no one gives a sh.t 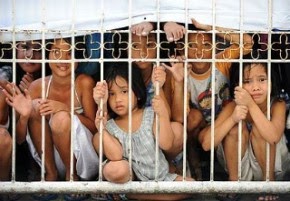 MAKE a simple calculation. Get the total wealth of the Top 40 Filipino families, the dollar billionaires and dollar multi-millionaires tracked yearly by Forbes magazine. Then get a ballpark figure of the worth of the 4 million families that live in abject poverty, the kind of families that either sell their daughters to pedophiles or kill them when they are young to lessen the burden of feeding too many kids

How vast would be the divide after making the comparison? The answer would make you tear up or tear your hair in frustration.

Our saddest fact of life is this: the richest family is worth $11 billion or more. The poorest 4 million families own practically nothing of value except, perhaps, if they sell their body organs to rich seekers of eyes, kidneys, livers, etc.

Critiquing the country from the context of the great divide, and not on GDP growth, would send one to utter desperation. And that all the press releases about being the star performer in the region really amount to nothing once inclusive growth is factored into the growth equation. We are reminded of what Robert Kennedy said after a tour of the poverty-riven Appalachians: impressive growth rates were irrelevant to these wasted lives.

What is worse than the Great Divide? It is the fact that nobody in the leadership has been paying attention to it. We live in a kind of bubble.

For as long as the growth stats are impressive, for as long as the multilateral institutions and the credit raters are giving us the stamp of good economic behavior, everything is fine and dandy. Between easing poverty and getting the nod of Standard and Poor’s, what do you think is the higher official preoccupation?

The poor who lives on less than $2 a day? Who cares about the dregs, Fanon’s Wretched of the Earth?

In most democratic societies, inequality is the greatest worry. When it is discussed, every other issue takes second fiddle. Winners of economic Nobels take up the issue with utmost seriousness and take sides. The progressives argue for redistribution and propping up of the social safety nets. The conservatives argue for minimum government intervention on the assumption that by just empowering the job creators (the rich and super rich) through tax cuts and regulatory laxity, there would be a trickle-down economic bonanza to those at the bottom of the pile.

The defining challenge of our time

The most serious policy debates are those focused on inequality.

The president, or leader of the nation, then makes a speech about correcting the great divide.
Just what President Obama did a few days ago, in a speech on correcting the great inequality that was called his greatest economic speech ever. How did Obama describe the problem of inequality? He called it “ the defining challenge of our time.”

In our own sad country, attention to easing the great divide is perfunctory, if not cynical. What are proofs of this policy cynicism?

President Aquino, remember, started his term in mid-2010 with his view of the great leveler. It was about his big decision not to use the wang wang. That no one should invoke authority when it comes to waiting out traffic jams. Even the president should get stuck in monstrous jams.

It was great symbolism of egalitarianism, at least from the view of the middle-class and the car-riding members of the media.

But as we all know, this great symbolism will not impact on bridging the rich-poor chasm and lift the poor out of their unbridled poverty. The poor will never own any mode of transport in their lifetime except for hand-me-down bicycles. According to a report in The Manila Times, the 3.8 million poor families in 2006 rose to 4.2 million families in 2012. The wang wang spiel, the great leveler from the view of the middle class, did nothing to ease mass poverty.

The P40 billion or so conditional cash transfer (CCT) program helps the poor meet their basic needs but given the nature of the poor’s spending habits, the likes of tobacco and liquor are preferred. The CCT, at best, boosts overall demand and expands the market for consumer goods.

The principal beneficiaries, in the final analysis, are the manufacturers that cater to the habits of the poor, the cigarette and liquor companies, those that make coffee and cooking oil. And Vietnamese farmers that supply us with rice. The noble purpose of the CCT, to ease the dropout rate and place the children of the poor into the educational mainstream, has miserably failed.

While the school dropout rate has been unmoved and 80 percent of the poor families that enter elementary school do not even reach college, the sons and daughters of the liquor and cigarette manufacturers go to Yale or Princeton after their high school (at the elite international schools) in Manila. Going to the top universities here is not even an option.

The most potent and the most cost-efficient antidote to poverty (which has a rural, agrarian face) is to allocate a jumbo fund for agricultural research and development. An energized R and D would develop rice that would grow prodigiously in the uplands, vegetables that would thrive during the rainy season, poultry that would mock the Newcastle infestation. These in turn would be life-changing events in the rural areas.

by Marlen V. Ronquillo for “The Manila Times’