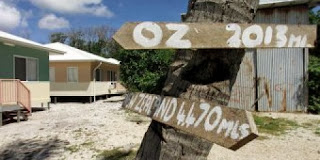 [exclusive]
The Government has secretly called for tenders to build a new offshore processing centre in another recipient of substantial Aussie aid, The Solomons, according to an informant.

A senior Government official stationed on Nauru has described the current state of affairs as alarming, and in some cases almost comical, with costs running completely out of control.
“There are no port facilities here, we have to use barges and the only crane keeps breaking down”, he said

Daily 737 flights carrying supplies between Brisbane and Nauru are costing $114,000 each and often they transport as few as 3 or 4 people for specialist care.

“People don’t realise that Nauru is half way to the US and the larger C17s are burning up $400,000 a week in fuel”, said the official.

“The Salvation Army has been infiltrated by pink-haired, tattooed people with rings hanging from every orifice and boy, are they are causing havoc”, said the informant.

“The transferees are getting their clothing via the Salvos who in turn get it from Aussie collection bins. Thing is that they refuse to wear anything other than big brand name stuff like Dolce, Levi, Nike, Adidas etc.

“So the Pink Salvos are picking out the best stuff and giving it to the boaties while needy Aussies back home are getting left with crap”, he said.

“Iranians and Afghanis, who are banned from having cigarettes since they burnt the place down, are dealing in contraband and, assisted by the Pink Salvos, are now getting all the smokes they want from down town.”

The official described the tolerated sexual behaviour of the all-male Iranians as disgusting and they have now been isolated in No. 2 Centre for health reasons.

“The Pink Salvos also supplied inmates with hundreds of jars of Vegemite saying the vitamin B component would act as a repellent to the mosquitoes.

“Unfortunately none of them liked the taste so they smeared it over every part of their bodies. All you could see was their teeth.

"It then attracted every creepy crawly on the island and the whole camp had to be fumigated the next day.”

But the official had high praise for Minister Morrison, “At least he has been up front with us as to where this is all going”, he said.