The Flood to India’s Cities 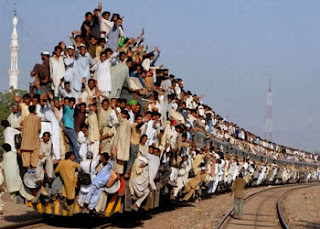 All aboard for the bright lights
India, China take radically different approaches to urbanization, to India’s sorrow

Fed up with isolation, deprivation and hardship, Chandra Ballabh Bhatt, 30, a few years ago picked up his family – a wife and two children aged 2 and 6 – and emigrated from Okhalkhandam, his 350-person village in northern Uttaranchal, to Noida, a new industrial planned city southeast of New Delhi.

Life in Okhalkhandam, he said, “was full of struggle. For months, we didn’t have electricity in our village. Water wasn’t available either (due to an erratic irrigation system) to till my small farm where I grew vegetables and wheat. There was barely enough food to keep the wolf from the door.”

An undeveloped rural economy meant that jobs were scarce. The schools were lousy, the ill-equipped hospital a daunting 100 km-trek from the village. The only toilet was half a kilometer away, Bhatt said. In fact, 59.4 percent of rural households have no toilets, according to India’s National Sample Survey Office, meaning nearly 60 percent the rural poor defecate in the open, a significant health hazard.

“It was common for pregnant women to die en route to the hospital without proper medical care,” Bhatt said “My wife too, had pregnancy-related complications. She nearly died when my younger child was born. What kind of a future could I have given to my children by staying on in the village?”

Fed up with his destitution, Bhatt took the plunge to relocate to a city. Many of his relatives had already done so – migrated to Delhi and Noida. Bhatt too, bundled up all his life savings – crumpled notes amounting to the equivalent of US$80 – and boarded a tempo to the nearest town. From there, he changed to an overnight bus to reach Noida.

Bhatt thus joined India’s vast numbers of rural dwellers who head for cities that are totally unequipped to handle them. According to a study by K. Laxmi Narayan, a Social Demographer at the University of Hyderabad, almost 50 percent of Mumbai’s population are living in slums, as are 32 percent of Kolkata’s. According to the 2001 census, the total slum population in urban India was 42.6 million, 15 percent of urban India’s population.

Bhatt’s wife and kids didn’t accompany him at first. “I thought I’d bring them in only after I’d settled down in the city,” he recalls. At first the farmer had to shack up with another villager in the city in a 7X7- sq. m tenement. After three weeks, Bhatt managed to land a job as a security guard at a local apartment block, which paid him US$ 20 per month.

The money was a pittance. But the farmer says it saw him through tough times as local residents pitched in with meals when he did odd jobs for them like cleaning cars or fetching groceries. To improve his earnings, he learned tailoring after winding up his guard’s shift. Equipped with better job skills, he soon began knocking on the doors of local garment factories.

A month later, he got lucky. He bagged a job at a factory that currently pays him the equivalent of US$200 a month. With two hours of overtime twice weekly, Bhatt was able to add another US$60 to his salary. He then brought his family down from Okhalkhanda.

“It’s still a hand-to-mouth existence,” he concedes. “But at least we have a roof over our heads, access to good doctors, water and electricity and a decent school for my kids. Plus my wife works as a maid in a nearby house bringing in another $50.”

For millions of villagers like Bhatt, distress migration is proving to be the only panacea for impoverished lives, but creating a pressing need to rejuvenate and revitalize India’s existing towns and cities to create new greenfield cities. The failure to do this will seriously retard India’s growth process leading to disastrous consequences. As India grapples with urbanization, it will encounter severe challenges. But it needs to leverage these as huge opportunities for sustainable growth. Recent studies project that India will face an unprecedented scale of urbanization when 350 million will move to cities by 2030.

That number is likely to double to 700 million by 2050, 2.5 times the size of the United States’ present population and rivalling China for the largest urban movement in the world. In other words, every minute over the next 20 years, 30 Indians like Bhatt will leave rural areas for the cities.

It was basically a misguided attempt to decelerate this rural-urban exodus, through provision of locally available work, that the UPA (United Progressive Alliance) government launched the National Rural Employment Guarantee Act (NREGA), its flagship welfare program and the largest of its kind in the world in 2006.

But the impact has been limited. Recent independent studies argue that NREGA’s failure stems partly from a flawed premise, that labor migration is a poverty problem and merely a product of ‘push-and-pull’ economic factors. This view wrongfully assumes that farming is what the poor really want, and that poverty is chiefly a rural problem to be tackled by rural development.
“As a concept, NREGA is great,” said urban planner Shashi Bhagwat. “But it doesn’t delve deep into reasons why villagers are still migrating eight years after its launch. This is largely due to social factors.”

It’s a myth that rural poor only dream of the swaying verdant fields shown in Bollywood movies as the key to their happiness, Bhagwat explained. “They’re increasingly having higher aspirations – of better housing, English-medium schools, access to good hospitals in their villages. They’re not just thinking merely in terms of survival,” she argues.

At the other end of the spectrum, the only major urban scheme India has launched in its entire planning process to tackle rural-urban migration is the Jawaharlal Nehru Urban Renewal Mission (JNURM), and analysts have reservations about the plan’s capacity to cope with the country’s rural-urban demographic shift. They emphasize the imperative need for India to create 500 new cities to accommodate and provide a better quality of life to its migrating people. Otherwise, they warn, every existing city will become a slum when India turns 75 in 2022.

A recent ministry report has highlighted that by 2020 India will be facing a housing shortage of 30 million dwelling units, 200 million water connections, 350 million people will have to be given access to sewage, 160 GW of power- generating capacity will have to be added and the number of vehicles on roads will increase fivefold.

At the beginning of the Eleventh Five Year Plan (2007-2012), the urban housing shortage reached 24.7 million. Of that shortfall, 99 percent pertained to the economically weaker sections and lower income groups in which migrants typically fall.

Following Independence in 1947, the broad view among utopian Indian politicians – still under the heavy influence of Gandhian philosophy – was that India would be able to get by on its agri-economic model.

“But no country in the world has grown on a sustained basis for long periods purely on the back of its agricultural sector,” said economist Sanjeev Mistry, previously with the ministry of urban affairs. “It is inevitable that people will migrate from rural India to towns and cities.”

Farming accounts for nearly 60 percent of India’s workforce, but accounts for only 14.2 percent of GDP, Mistry added. Agriculture can sustain a growth rate of 3 percent while the Indian economy must grow at 9-10 percent to lift vast segments of its population above the poverty line.
Amitabh Kant, CEO & MD of the Delhi-Mumbai Industrial Corridor Development Corporation, says India can learn a valuable lesson from China.

“For China, economic development was, in essence, about shifting people from sustenance farming to manufacturing, and urbanization was the spatial manifestation of this shift. As a policy, it adopted rapid planned urbanization with manufacturing as the key locomotive. The development of new cities and expansion of existing ones has been a dominant feature of China’s growth in the last three decades.”

The government in Beijing is actively planning to rebuild and refurbish 20 inland cities whose satellite areas will serve the upgraded and expanded needs of 800 million people. That is expected to kick off an unprecedented building boom that is intended to carry with it a whole parade of ancillary industries including durable goods, automobiles, etc. Just a week ago, China opened an additional 2,000 km of high speed rail links designed to move up to 700 million people around the country. Another 12,000 km of new high speed rail is under construction.

There are concerns whether China can pull it off, and some of the enormous housing estates already built suffer from substandard construction and the residents that have been moved into them suffer a range of social problems from joblessness to feelings of dislocation.

But whatever the problems, China is facing up to the need to urbanize and making it a positive goal to drive economic growth. There is little indication that India’s government leaders are doing more than throwing up their hands in alarm.

Certainly, India’s problems are every bit as big as China’s if not more so
Kant also quotes the example of Kitakyushu in Japan which, post- World War II, was the most polluted city of the world. But today, he says, it is a unique example of green technology and clean environment. Singapore is another example of innovative integrated water management approaches — using reclaimed water, recycling and desalination.

Migration – and its corollary burden on cities – some historians argue, is only part of India’s woes.
Preeti Mann, a social anthropologist, writes in an essay, “India in transition: Urban migration and exclusion” that the success of the Indian urbanization agenda will be hugely dependent on the poor migrants’ integration as urban citizens. She also points to the growing hostility of urban governments, as well as middle-class citizens, towards the urban poor, especially migrants to the cities.

Currently, the anthropologist argues, the urban development is a story of sharp contrasts. “Urbanization in India subscribes to forces of the neo-liberal economy, Mann writes, “where citizens are expected to become self-reliant and not be an economic liability for the State.”

Mann theorizes that urban spaces are generating newer forms of inequalities and exclusions that go beyond caste. “In urban India, one’s social and economic class has become the new caste. The caste anonymity of migrants is not enough to allow access to all urban spaces, as their social profiling restricts entry to most of these enclaves.”

She predicts that acceptance of the permanence of the poor migrant population is critical to better planning, provisioning, and integration into India’s urban development.

“If schisms are left unaddressed, it will not be long before the inequality in India’s urban centers, like the rural hinterlands, becomes engulfed by civil strife,” Mann predicts.
(Neeta Lal is a senior journalist living in New Delhi and a regular contributor to Asia Sentinel)