NAYPYITAW, Myanmar — Watched around the clock, bathed twice a day and otherwise pampered, five white elephants are munching on choice greenery in Myanmar's vast, remote and surreal capital. Above them soars a shimmering, gold-plated pagoda

From ancient times, Myanmar's rulers regarded these rare albino animals as sacred accessories of kingly capitals, symbols of power and prestige. But in this grandiose city built from scratch in secrecy, at great cost and in a seemingly unsuitable location by the country's former military dictators, some find it fitting that "white elephant" is also a term for a troublesome possession too expensive to maintain. 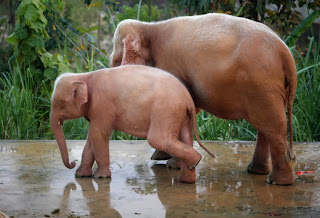 Eight years after Naypyitaw — "Abode of the King" — was proclaimed the new government seat, it has become something more than a "ghost capital hacked out of the jungle," as it was once described.

Private enterprise is staking some ground. More shops and restaurants have opened and 79 hotels are operating or under construction. Some foreign companies, notably the Japanese, have set up small branch offices.

A dozen impressive stadiums, meeting halls and hundreds of villas for visiting VIPs have been built here for the Southeast Asian Games, an 11-nation event that began Wednesday. Naypyitaw (nay-pee-thaw) will be in the spotlight again next year when Myanmar chairs the 10-member Association of Southeast Asian Nations.

But the capital remains far from meeting the grand expectations that built it. It's 40 times the area of Washington, D.C., dotted with enormous public buildings that seem incongruous in one of the world's poorest countries. The U.S. Capitol is positively puny compared with the equivalent here. The main conference center dwarfs the United Nations building in New York, and the airport, home to just two international airlines, is designed to handle up to 10.5 million passengers a year.

The political opposition and diplomats are among those who hope the capital one day reverts to Yangon, the country's heartbeat in almost every way, as democracy truly takes root and the military's power wanes. Myanmar has a rich history of moving capitals — more than 30 shifts since the 9th century, the shortest lasting barely a year.

The current leadership says Naypyitaw is here to stay, and the city has other boosters, including executives of two international-brand hotels nearing completion.

"As the capital of one of Asia's fastest-emerging economies, Naypyitaw has a huge amount of potential," says Glenn de Souza, the regional vice president for U.S.-based Best Western International. "Initially you might call it a 'curiosity factor,' but as time goes on it could become a serious option for more leisure travelers."

A senior vice president of the French-owned Accor Group, Patrick Basset, predicts Naypyitaw will become one of the most-visited cities in Myanmar, also known as Burma.

Some residents say the airy capital is more livable than Yangon, a city of seething tenements, traffic-jammed roads and about 5 million people. Naypyitaw's water supply is better, and its virtually uninterrupted electricity contrasts with Yangon's daily power cuts.

"It's a spacious, green city, so it's a healthier city. I feel suffocated when I go back home," says Ko Pyone, a Yangon native who manages a branch of the Cherry Oo watch chain.

Foreign embassies are steadfastly holding on in Yangon, 320 kilometers (200 miles) south of Naypyitaw and a five-hour drive away. Diplomats are looking toward the 2015 election, expected to pit military-backed parties against opposition led by pro-democracy leader Aung San Suu Kyi.
"I strongly believe that the capital will one day move back to Yangon," said the spokesman for Suu Kyi's National League for Democracy, Nyan Win.

Although no public poll has been taken, one joke circulating says that any politician who promises to restore Yangon as the capital will be guaranteed election.

Naypyitaw has some amenities, including a state-of-the-art movie theater, a safari park and a modern mall. But except for one bustling market, it lacks the color, crowds and friendly chaos of other Myanmar towns and cities. The sprawling city lacks public transport, so people must rely on expensive taxis, private cars and motorcycles.

"There is no nightlife here. There is nobody walking in the streets after 9 o'clock. So you stay at home and watch TV," says Zeyar Oo, owner of a mini-mart chain.

Several officials said moving the capital back to Yangon is not an option. Like most in the government, they spoke on condition of anonymity.

Reflecting the secrecy still ingrained in a country under iron-fisted military rule for nearly half a century, officials refused to provide such basic information as the city's population. Various sources, citing official statistics, have said it was 925,000 in 2009, though many visitors have found that figure hard to accept.

The government has never even clearly stated why the capital was relocated in the first place.
Theories include its more central, strategic position, allowing better control of the country, and its isolation from a Yangon population that periodically rose up in bloody protests against the regime.
Many Burmese believe former junta leader Gen. Than Shwe, the capital's prime architect, followed the examples of ancient kings who believed changing capitals was auspicious and consulted astrologers before giving the command.

Than Shwe, still believed to wield considerable power behind the scenes, lives in a secluded Naypyitaw compound with other top military leaders. A restricted military zone is said to contain bunkers and tunnels.

Construction of the city began in the early 2000s in an area inhabited by largely dirt-poor farmers. Much of the city consists of long stretches of multi-lane highways flanked by scrubland, forest and fields where water buffaloes graze. Set within the greenery are hundreds of orderly apartment blocks housing civil servants, assigned according to rank. The roofs are color-coded: green for employees of the Agriculture Ministry.

To attract — some say force — usage, the government has relocated everything from the equivalent of Myanmar's Academy Awards to most animals in the Yangon Zoo to the annual gems emporium.

Diplomats have been more difficult to attract. Only Bangladesh and Malaysia are known to have paid the government's $1.5 million price for an embassy plot, and neither has begun construction.
But Thant Myint-U, a prominent historian and government adviser, says returning the capital to Yangon would be very expensive, and the government will have other priorities.

"Nothing is irreversible, but as the years go by, I think it will increasingly difficult, even if there was the political desire," he says. "Having an administrative center that's different than the biggest city is not in itself a bad thing."

Than Shwe stamped a traditional seal on Naypyitaw as a center of power by erecting an almost exact replica of Yangon's incomparable Shwedagon Pagoda here. He made it 30 centimeters (one foot) shorter out of respect for that holiest of shrines.

And the white elephants were given their deluxe lodgings. Life here is "lonely, boring" for Forestry Department veterinarian Tin Ko Lat, whose wife and two children live far away. But he loves his work.