It’s Time to Wage Peace in the Asia-Pacific 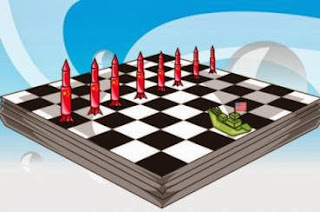 As the drums of war beat over the crisis in Syria many pundits have argued that President Obama lacks strategic vision in managing foreign affairs. Others believe that America today seems more interested in avoiding foreign policy challenges than solving them. When it comes to a global grand strategy – some sort of all-encompassing vision that guides Washington’s focus across all important domains (economic, strategic, defense, cultural etc.) – one would be hard pressed to find such a document.  America seems adrift, simply reacting to the crisis of the moment instead of offering leadership in many areas and regions that are in its obvious national interest.

However, in the Asia-Pacific and wider Indo-Pacific region, one could make a compelling argument there is a strategy – one that has been embraced over several years and is clearly in Washington’s long-term strategic interest. Going by many names (Pivot, Rebalance, Pacific Dream) America is clearly making a play to engage this vital region across all domains. Since making its debut in the pages of Foreign Policy by then Secretary of State Hillary Clinton (and arguably sooner), America’s shift to the Asia-Pacific seems part of a wider play to reorient Washington’s strategic gaze to the planet’s most economically dynamic but also increasingly geo-strategically challenging setting.

Such a strategic shift makes obvious sense. As America left Iraq and removes its remaining military assets from Afghanistan, Washington naturally has seen to recalibrate its foreign policy focus. A decade plus of a “war on terror,” COIN, and other strategic goals seems to be fading into the rearview mirror.  Recalibrating its economic, defense and other interests towards Asia is quite natural considering the rise of China, America’s economic goals, and Asia’s various strategic challenges and possible flashpoints such as North Korea and the East and South China Seas.
Since declaring America’s intention to make Asia its top foreign policy priority, an ever increasing focus has been placed on the military dimensions of such a shift. Various publications I have been involved with on different levels have hosted a spirited debate on the nature of Washington’s Asia defense strategy, which I have played a small role in. Readers have become quite familiar with terms such as AirSea Battle (ASB), Offshore Control (OC) and Anti-Access/Area-Denial (A2/AD) etc. Yet, while the nature of the debate has been spirited at times and increasingly informative — flushing out the weaknesses of all sides of the argument –  there seems to be something missing — a larger point lost. While such a debate has clearly been needed, a shift in focus seems to be warranted in order to broaden its perspective and move from informed analysis and critique to creating solutions and approaches that can mitigate obvious tensions in the U.S.-China relationship.

First, when it comes to the idea of AirSea Battle being a “mistake” or “aggressive,” we need to think in broader, strategic terms. Military planners are always looking at what threats might someday come over the horizon and challenge American interests — a simple and basic necessity in military planning and setting procurement goals. Today, America and China, despite their problems, have very little incentive to go to war. However, Beijing is clearly developing asymmetric capabilities in case the situation changes someday, or a crisis puts the world’s number one and two economies and militaries on a collision course. China is simply pursuing a strategy that looks at the challenges it could face in the future from what it sees as an important economic partner but also strategic competitor.

It looks to the recent past, specifically the 1995-1996 Taiwan Crisis and the rise of the revolution in military affairs (RMA) that Washington has embraced, and altered its defensive strategy accordingly. China, in many respects, has rebalanced its own military strategy from continental challenges — specifically from the now-defunct Soviet Union — to challenges in the near-seas and important SLOCs. This is quite natural considering its growing economy and increasing strategic interests.  America, whether using ASB, OC or some other strategic guidance to counter China, is also pursuing concepts to defend its own interests. This is also natural and quite expected. The obvious danger is both nations “rebalancing” creates an ever increasing dilemma — both states interests seem to be in direct conflict.

Second, we must not get over excited about the contention by some that an AirSea Battle based strategy would in theory utilize strikes against mainland China. Truth be told, as has been stated many times, AirSea Battle is an operational concept that would need to be incorporated into a battle plan, not the battle plan itself. And battle plans vary based on the situation and tactical goals they consider — and are classified for obvious reasons.  If we are to be concerned, we should be equally concerned that Chinese scholars in various formats have put forward various strategies that PLA weapons (specifically large amounts of ballistic and cruise missiles)  should be employed in overwhelming force — sometimes preemptively –  in  massive strikes on U.S. and possibly Japanese airfields and capital ships if conflict seemed imminent.

We should be under no illusions – such a conflict would cost many lives, could be fast moving, and have the potential to escalate quickly thanks to the nature of modern warfare. And let’s not forget about the possible nuclear dimension to such a contest.

Clearly the passionate debate over America’s Asia defense strategy is an important contribution to the overall larger debate of where the U.S. should focus limited resources in an era of sequestration and large budget deficits, but also of ever-growing national security challenges — Syria being just the most recent example. Increasing tensions in Asia have only created an environment where defense issues have shown a need for honest discussion and frank debate.  However, we must not lose focus on the most important of all goals, the need to maintain a stable U.S.-China relationship for years to come.

Indeed, increasingly honest and frank discussions are needed between U.S. and Chinese leaders, defense and government officials across various formats. Beijing and Washington need to have a clear and honest understanding of each other’s goals, strategic interests, potential compromises and issues where each side can expect tension for the foreseeable future. It is quite natural for both the U.S. and China to devise operational concepts and larger defense strategies to secure important national interests and conduct wargames.

With this being said, it is equally important to mitigate strategic tensions through increasingly frank discussions, removing as much of strategic ambiguity as possible, which only clouds defensive decisions and leads to unneeded problems. Tensions will remain, considering the stakes involved and relative power of both countries. But both sides need to do all they can to remove the cloud of ambiguity when it comes to their strategic goals and defensive priorities.

Simply put: the nature of defense debates in Asia needs to move from strategies, operational concepts, possible targets and what weapons systems can destroy to how we can mitigate tensions and work towards areas of common ground — or at least a clearer vision of all sides’ strategic goals. Such ideas can only help remove from the public debate dangerous guessing games about each sides’ strategic goals and objectives. The first step in such a reconstituted debate is for all parties to clearly state their goals and objectives and not fear hypothetical plans for conflict. We need to move the nature and character of this debate from one of who would win such a horrific conflict to how we can stop such a conflict from happening in the first place. ‘The Diplomat’