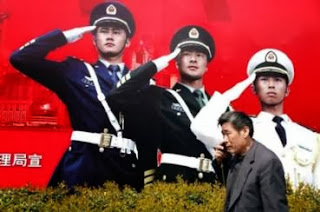 On Dec. 5, a Chinese naval vessel deliberately attempted to block a U.S. Navy cruiser in international waters. And in a startling revelation, U.S. Defense Secretary Chuck Hagel has confirmed to the press that at one point only 100 yards separated the two vessels. That raises an important question: Why did the Chinese commanders think it a good idea to provoke a near-collision with a U.S. warship?

A growing record of encounters suggests that Chinese naval officers have career incentives to act provocatively, even at the risk of deadly incidents. So do their counterparts in the army. Forces under the Lanzhou Military Region, in China's west, thought it smart to seize Indian-controlled terrain in Ladakh this April. They retreated only when the Indians threatened to cancel an upcoming state visit. Similarly, the China Coast Guard has been intrusively patrolling the waters around the Japanese-controlled Senkaku Islands, even entering Japanese territorial waters in recent days.

It was different during the Cold War. In spite of countless encounters between American and Soviet aircraft and warships, as well as the famous set-to between the U.S. and Soviet armies at "Checkpoint Charlie" in the heart of Berlin, there were very few dangerous incidents. Soviet officers knew that "adventurism" was a career-ending offense.

Yet in the Chinese case, Communist Party leaders apparently encourage it. The state media vigorously endorse each act of military adventurism.

Why should this be? After all, the risks of escalation are enormous.

With all due respect for the Liaoning, China's first aircraft carrier, which the USS Cowpens was monitoring from a safe distance from the Dec. 5 incident occurred, today's Chinese navy is nothing more than a set of easy targets for America's aircraft carriers and attack submarines. The USS Cowpens itself is a near 10,000-ton missile cruiser.

Likewise, Japan's navy could sweep the seas around the Senkakus of any intruding Chinese coast guard or naval vessels, including the entire Liaoning flotilla. So why is Beijing risking humiliating defeat?

The inescapable conclusion is that since 2008 China's leaders have abandoned the "peaceful rise" policy that Deng Xiaoping launched in 1978 and senior strategist Zheng Bijian spelled out in 2003. To rise economically, China needed a receptive world environment in which its exports, imports and incoming investments would be unimpeded. Deng's policy—threaten nobody, advance no claims and don't attack Taiwan—was brilliantly successful, as the U.S. actively favored China's economic growth and other countries followed suit, to the great benefit of the Chinese people, and us all.

Everything changed after 2008. Interpreting the global financial crisis as a harbinger of collapsing American power, Beijing abruptly revived its long-dormant claim to most of the Indian state of Arunachal Pradesh, rebuffed friendly overtures from Japanese politicians and instead demanded the Senkakus, and declared ownership of vast portions of the South China Sea hundreds of miles from any Chinese coast but well within the exclusive economic zones of the Philippines, Brunei, Malaysia, Indonesia and Vietnam.

China's demands are now asserted even on its passports, which are decorated with a map that on close inspection includes South Korean waters. The seven countries under pressure have naturally reacted by coalescing against China, at least diplomatically, and in some cases substantively—as in the informal India-Japan-Vietnam arrangement that is endowing the hard-pressed Vietnamese navy with modern submarines. China's bombastic proclamation last month of an Air Defense Identification Zone that overlaps with both Japan's and Korea's, may even improve the fraught relationship between those two countries.

Chinese leaders now complain of being confronted by emerging coalitions from South Korea to India, and they blame the U.S. for it all. But in spite of Washington's famous "pivot," it wasn't the cunning malevolence of the U.S. State Department that turned China's neighbors against it.
Rather, it was the Chinese government itself—country by country, demand by demand. The latest demand, after the Air Defense Identification Zone affair, is that Japan should not increase its military spending—i.e. that it should refrain from reacting to daily Chinese threats.

Some observers see a clever long-term scheme of systematic intimidation at work. Others insist that it cannot be clever to quarrel with seven neighbors all at once. Nor does it make sense for a rising China to alarm everybody prematurely, causing them to unite diplomatically and even perhaps commercially against Chinese interests.

China's Communist Party leaders have been competent in managing a vast and dynamic economy, and their repression is also very skillful in minimizing visible brutality (except against minorities). For these reasons, there is an assumption by many outsiders that the leadership is equally proficient in foreign policy.

Unfortunately, the actual evidence so far is that we are witnessing a prolonged outbreak of feckless nationalism and militarism that evokes the sinister precedent of pre-1914 Germany. This was a country that had the world's best universities, the most advanced industries and the strongest banks. It lacked only the strategic wisdom of persisting in its own "peaceful rise."
Mr. Luttwak is author most recently of "The Rise of China vs. the Logic of Strategy" (Harvard, 2012). ‘Wall Street Journal’