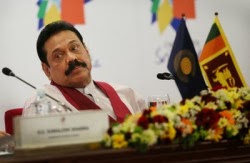 It is disappointing that Sri Lanka, a country with such a serious democratic deficit, is chairing the Commonwealth for the next two years. All signs indicate Sri Lanka is descending into authoritarianism, and much work is needed if Sri Lankan democracy is to be saved

Given Sri Lanka’s chairmanship, it is not clear what the values and principles of the Commonwealth actually are. At November’s Commonwealth Heads of Government Meeting (CHOGM) in Colombo, many heads of state chose not to attend.Mauritius has even given up its right to host CHOGM in 2015, and the event is now slated to be held in Malta. Of those who did participate, British Prime Minister David Cameron made the most noise.

Sri Lanka continues to face a human rights crisis of epic proportions. The continued erosion of the rule of law, impunity, the government’s blatant unwillingness to implement the most meaningful recommendations from the final report of its own reconciliation commission (the Lessons Learnt and Reconciliation Commission), and the recent unconstitutional impeachment of the chief justice underscore this. Sri Lanka is no longer a semi-democratic country — it is a dying ‘democracy on life-support’.

The Sri Lankan government chose to hold CHOGM in Colombo, principally because of the prestige associated with the event and desire to show the world that Sri Lanka has moved on from three decades of brutal war.

The event, however, did not go that smoothly. The regime consistently limited access for international journalists, especially to the North, and revealed its deep unease with being questioned. With the way CHOGM was handled, the current regime has yet again reminded domestic and international observers that it is far from untouchable. That being said, the regime remains the only game in town.

Many countries — including India, China, the United States and Japan — are currently vying for influence on the island. But the reality is that the international community’s ability to shape events in Sri Lanka remains limited. Not helping this are Sri Lanka’s mainstream media, which consistently fails to report the news in any meaningful way. The harsh repression of dissent has resulted in significant self-censorship. A deeply fragmented opposition is also an issue.

India has long had a very understandable interest in the way things play out on the island. China’s interest is more recent and includes geopolitical and economic concerns. But it is the American case that is especially intriguing. Washington appears to be using Sri Lanka as a test case, perhaps to see how effective similar interventions, international pressure and the concomitant use of venues like the UN Human Rights Council (HRC) — where two resolutions critical of the government’s actions have already been passed — can actually be. Aside from speaking more generally about human rights and democratic reforms, Washington is pressuring the regime to implement the recommendations emanating from the LLRC. Though bilateral ties are also very important, Washington has used the HRC as a platform to rally international support for these issues.

Washington is quite open that another resolution will be floated at the HRC in March 2014, and it is likely that such a resolution will pass. But will the resolution be ‘strong’, and include a provision for an independent international investigation into wartime atrocities and/or an international mechanism to monitor ongoing developments on the island? And — more importantly — would a strong resolution on Sri Lanka at the HRC be effective? Would it compel the regime in Colombo to modify its behaviour, respect human rights, the rule of law and promote democratic values?
Another coming measurement of Sri Lanka’s democratic condition will be in the next parliamentary and presidential elections, which could come as soon as early 2014.  While the Tamil National Alliance (TNA) has recently been effective in voicing the concerns of Tamil people and speaking more generally about the erosion of democracy in the country, the TNA will never be able to capture a huge swath of the mostly Sinhalese electorate. The trick for the TNA will be to build an alliance with one of the larger Sinhalese parties — in this case, the United National Party (UNP).

When it comes to democracy and human rights in Sri Lanka the signs are, quite evidently, not promising. Unfortunately, it looks like things will get worse before they get better.
Taylor Dibbert is an international consultant based in Washington, DC.