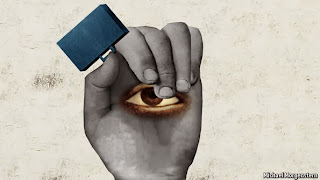 HYPOCRISY does not make you wrong, but it hands your critics a convenient weapon. When David Cameron, Britain’s prime minister, visited Sri Lanka for the recent Commonwealth summit, he was right to insist loudly and publicly on the need for a proper investigation into the carnage at the end of its civil war in 2009. But this week, on his next trip to Asia, that robust riling of his hosts laid him open to charges of double standards, as he indulged in three days of conciliatory schmoozing in China.

Neither Sri Lanka’s nor China’s government would be surprised that the passion for truth and justice aired so volubly in Colombo was buried far deeper in Mr Cameron’s luggage in Beijing. Neither accepts that Western “meddling” in their internal affairs on issues such as human rights flows from a genuine belief in universal principles. Rather, they see it as a self-serving diplomatic optional extra, to be discarded as soon as it jeopardises other interests. And China, unlike Sri Lanka, is powerful enough to make Western leaders hold their tongues.

Of course Western governments would deny this stoutly. Discussion of human rights, Britain says, is an integral part of its relationship with China. The two countries have held 20 rounds of a bilateral dialogue on the issue and British leaders raise it at every opportunity. But the 20th round was two years ago; and there is little evidence that Chinese leaders see the harping on human rights in private exchanges as more than an irritating quirk, like the British fondness for talking about the weather.

So the version of Mr Cameron’s visit to China believed by many observers is one in which he has swallowed a big chunk of humble pie. After he met Tibet’s exiled spiritual leader, the Dalai Lama, in London last year, an incensed China froze him and his country out. British business complained it was losing out to European competitors. Mr Cameron had to reconfirm that Britain does not advocate Tibetan independence and say that he had no plans to meet the Dalai Lama again.

Only then did China welcome him back, at the head of the biggest British trade mission ever to go there. In the circumstances, he could not risk making provocative public statements about China’s “internal affairs”. It seems unlikely that the leader of any big European country will receive the Dalai Lama again. This week Global Times, a Communist Party paper, crowed that Britain, France and Germany dare not jointly provoke China “over the Dalai Lama issue”. Even America’s Barack Obama delayed meeting the Dalai Lama until after his first visit to China in 2009, tacitly conceding China’s point that the meeting was not a matter of principle, but a bargaining chip.

If China is getting its way diplomatically on Tibet, it is not because repression there has eased. Over the past two years, more than 120 Tibetans have set fire to themselves in protest. This week, exiles reported the sentencing of nine Tibetans for alleged separatist activity. Similarly, although freedoms for the majority in China have expanded, dissidents are still persecuted. The most famous of them, Liu Xiaobo, winner of the 2010 Nobel peace prize, remains in jail for no more than advocating peaceful, incremental political reform.

China has succeeded in shifting human rights and Tibet far down the agenda of its international relations for three reasons. One, of course, is its enormous and still fast-growing commercial clout. Not only is it an important market for sluggish Western economies. It is also a big potential investor—in high-speed rail and nuclear projects in Britain, for example.

Second, alarm at China’s expanding military capacity and its assertive approach to territorial disputes is also demanding foreign attention. Joe Biden, the American vice-president, arrived in Beijing from Tokyo on December 4th. Liu Xiaobo and Tibet may have been among his talking-points, but a long way below China’s declaration last month of an Air Defence Identification Zone (ADIZ) over islands disputed with Japan, and the economic issues on which he had hoped to concentrate.

A third factor is China’s tactic of linking foreign criticism to economic and strategic issues. Global Times, not satisfied with Mr Cameron’s contrition, used his visit to chide Britain for the support it has shown Japan over the ADIZ, and for its alleged fomenting of trouble in Hong Kong. China might argue that linkage is something it learned from the West, and the days when its normal trading ties with America were hostage to human-rights concerns. But now China itself seems happy to use commercial pressure to bully Japan or Britain, for example.

It is also an advantage for China that the country is not much of an issue in the internal politics of its Western partners. No Western government faces a threat from an anti-government Chinese diaspora, let alone a Tibet lobby. By contrast, Sri Lankan politicians like to point out that their fiercest foreign critics are in countries, such as Britain and Canada, where governments seek the votes of ethnic-Tamil Sri Lankan émigrés, some of whom sympathise with the Tamil Tiger rebels routed in 2009. Canada’s prime minister, Stephen Harper, boycotted the Commonwealth summit. So did Manmohan Singh, prime minister of India, where the Tamil vote is of even greater importance. Neither Mr Singh nor Mr Harper has any qualms about courting China’s leaders.

Moreover, with domestic economies in the doldrums, Western voters seem not to want their leaders grandstanding on issues of moral principle abroad. In America, for example, for the first time in nearly 40 years of surveys, one just published by Pew Research found more than half (52%) of respondents agreeing that America should “mind its own business internationally”. So Western leaders have few incentives to act tough in China, and plenty of reasons to tone down their criticisms of its government. But hypocrisy does not make you right, either.
Economist.com/blogs/banyan