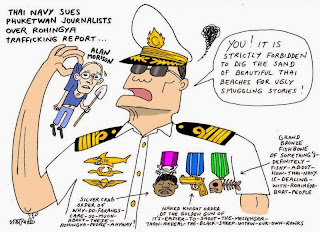 The PM pledged action after Reuters reported Thai officials' involvement in human-trafficking; instead, the Navy is taking reporters to court

Earlier this month Prime Minister Yingluck Shinawatra said Thailand would cooperate with the United Nations and the United States on any investigation into Thai immigration officials' involvement in human trafficking.

The pledge came after Reuters reported that immigration officers were taking Rohingya refugees from Thai detention camps and selling them to human traffickers waiting out at sea.

The UN and US gave weight to the Reuters report when they asked Yingluck to look into it, gaining a positive response from the premier.

The news seems to offer respite from Thai authorities' longstanding practice of turning a blind eye to the Rohingya question, sometimes even pushing them back out to sea to face uncertainty and even death.

Eight years ago Thai marine officials were caught on tape towing Rohingya boat people back out to sea. A subsequent investigation found that the action had sent the refugees to their deaths.

But it didn't take long to realise that Yingluck's pledge over this issue didn't mean much. Preoccupied with the political turmoil in Bangkok and lacking leadership, her government has decided to put the case on the backburner. Never mind that human lives are at stake.

The Rohingya are stateless Muslims who live in Rakhine on the western border of Myanmar. Up until 1982 they were considered citizens of that country.

Clashes between Rohingya and Rakhine Buddhists erupted last year, forcing nearly 150,000, mostly Rohingya, to flee their homes. Since then, anti-Muslim campaigns led by extremist Buddhist monks have ratcheted tensions higher, forcing tens of thousands of Rohingya to flee Myanmar by boat. Many have ended up on the southwest coast of Thailand, better known as a holiday paradise for foreign visitors.

But the sand, sea and sun isn't so much fun when refugees fleeing persecution are arriving by the boatload. The local Phuketwan news website on December 26 reported the harrowing ordeal of 139 Rohingya found hiding in a rubber plantation just north of Phuket after 22 days at sea. They told of how they had been handed over by the Myanmar Navy to smugglers, who had killed 12 among their number and savagely beaten others.

The arrival of Rohingya refugees is a source of embarrassment for Thailand, whose authorities are renowned for window dressing rather then getting to the roots of the problem, any problem.

In line with that mindset, the Thai Navy last week filed a lawsuit against Phuketwan journalists who followed up on the Reuters report.

"The Thai navy's lawsuit is a reckless attempt to curtail journalists' reporting on alleged human trafficking by its officers," said Brad Adam, Asia director at Human Rights Watch. "Unless the government withdraws the case, its impact will be felt far beyond those reporting on abuses against the Rohingya - and could have a choking effect on all investigative reporting in Thailand."

If convicted, Phuketwan's Alan Morison and Chutima Sidasathian each face up to five years in prison and a fine of Bt100,000. The Reuters journalists who broke the story could also face similar charges.

If the Navy thinks this lawsuit will restore its tarnished image, it needs to think again. If it really wants to improve its reputation, the Navy needs to launch a thorough investigation into the allegations. It's not too late. But the longer the authorities wait, the dumber they look.