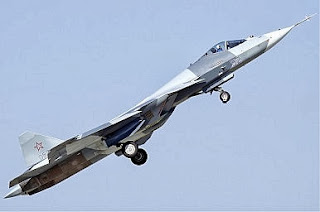 Russia’s new T-50-variant Fifth Generation Fighter Aircraft (PAK FA) may feature the most accurate air-to-air missile system ever devised. The new system specifically targets the ability of skilled fighter pilots to engage in violent maneuvers to break missile locks in older-generation technology, based on a radar system held within the nose of the missile.

The new missile, pegged the K-77M, was described by Russia Today as an “absolute killer.” It notes that what sets the K-77M’s technology apart from its counterparts is the implementation of a “active phased array antenna (APAA)” which essentially solves the lock-on problem by addressing the radar’s “field of view” problem.  Previously, this limitation allowed pilots to swing their jets out of the range of a tailing guided missile when in close proximity, evading the scope of the radar’s view. The K-77M essentially implements a solution similar to the Raytheon’s Patriot surface-to-air (SAM) missile system, according to Russia Today.

Russia Today explains the technology in more detail: “An active phased array antenna consists of a large number of cone-shaped cells installed under a transparent-to-radio-waves cap on the nose of the missile. Each cell receives only a part of the signal, but once digitally processed, the information from all cells is summarized into a ‘full picture,’ enabling the K-77M missile to immediately respond to sharp turns of the target, making interception practically inevitable.”

The development of this air-to-air missile — suspected to be the most accurate missile ever developed in its class — could be a major coup for Russia’s Detal design bureau, the developer. Russia Times notes that the chief engineer of the Detal design bureau hopes to begin manufacturing in 2015 after establishing a production facility. The economics of the missile appear to be favorable, even given the tall price-tag associated with APAA-equipped missile technology. Given the all-but-guaranteed accuracy of the system, Russia is likely to find several buyers. The K-77M could also render the PAK FA a more compelling purchase for buyers. The K-77M is reportedly compatible with previous generation Sukhoi fighters as well.

Russia already has interested buyers in the PAK FA. India is a major financial and research partner in the development of the next-generation fighter, and is expected to order around 200 units. The jointly-developed version is referred to as a the Sukhoi/HAL Fifth Generation Fighter Aircraft, a further derivative of the main PAK FA project. Until now, the primary Russian pitch on the Sukhoi PAK FA was its low cost compared to the U.S. F-22 Raptor and F-35 Lightning II. The addition of the hyper-accurate missile tech offers a compelling value-add in Russia technology, at least in the short term. The allure of an air-to-air missile that both in theory and practice never misses may be too much for prospective buyers to resist.

As far as The Diplomat was able to confirm, the United States does not seem to have air-to-air missile technology in existence or in known current development to compete with the K-77M’s accuracy.