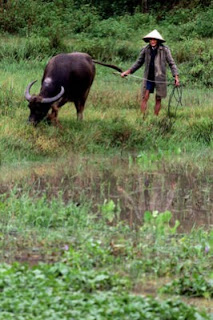 Most responses concern land grabs by provincial officials, which have dramatically increased since the law’s enactment in 2003.

In the last decade, the area of land taken from farmers has reached one-million hectares, significantly greater than the 810,000 hectares redistributed during the socialist land reforms in the 1950s. Currently land grab cases comprise over 30 per cent of all land disputes reaching officials and the courts.

Since the law’s enactment, the central government has incrementally moved land compensation payments closer to market prices. Provincial authorities are now required to pay ‘close to the price of land-use right transfers in real estate markets’. Studies by the World Bank show that even with a falling real estate market, land values still run well ahead of compensation payments. But the government faces a more intractable problem. Widespread public discussion about land grab cases has not only amplified resentment about the windfall profits made by investors and corrupt officials from land conversions but also armed farmers with tactics that increase their bargaining power.

A range of measures to placate farmers and take the heat out of land disputes has been debated within the party and more broadly in the official media and in unofficial blog sites. The committee overseeing constitutional reforms has now ruled out the most radical proposal — recognising private land ownership. Although the 1993 and 2003 Land Laws recognised private interests to sell, mortgage and bequest land, they retained state prerogative powers over private land-use rights. Reformers hoped that private land ownership would send a clear message to officials that citizens own robust proprietary interests that are enforceable against the world, including the state.

Two other proposed land reforms are currently being debated in the lead-up to the May 2013 sittings of the National Assembly.

One proposal aims to circumscribe state prerogative powers without adopting private ownership. Currently, officials exercise trung dung or ‘withdrawal’ rights over farm land. This prerogative power treats private land-use rights like licences that the government can extinguish at will. Proposed amendments to the Land Law 2003 aim to replace these powers with thu hoi co boi thuong or ‘acquisition with compensation’, a policy that would bring land grabs closer to the western principle of eminent domain by recognising that residual proprietary rights can only be taken with compensation.

A second proposal to remove the government’s powers to compulsorily acquire land for private socioeconomic developments would strike directly at the source of land corruption. Presently the government can withdraw land use rights for socio-economic purposes like privately funded industrial parks and condominiums, as well as for public purposes, such as transport infrastructure and hospitals. Many of the most complex land grab cases involving violent clashes with the police, such as the Golden Hills apartments in Da Nang and the Van Giang Eco-Park near Hanoi, involved land that had been acquired for private developments. As recent World Bank studies show, corrupt collusion between private developers and state officials is behind many of the most egregious land management disputes. To the surprise of many observers, the government — which is often closely implicated in land disputes — is actually in favour of removing its powers to compulsorily acquire land for private developments. But Nguyen Van Giau, Chair of the Economic Committee of the National Assembly, strenuously opposes this initiative. He argues that such powers are required to safeguard new industrial parks and associated infrastructure — a view that reflects the party’s overriding preoccupation with national economic development and industrialisation. The National Assembly in May will determine which view prevails.

In the meantime, the debate so far suggests that party thinking about land law has continued its incremental shift from the socialist notion of ‘people’s ownership and state management’ to a more individualised conception of private proprietary rights. Although private land ownership has been ruled out for ideological reasons, the government is prepared to strengthen the legal rights of land users—a reform that in theory could support farmers in their struggles  with state officials and rapacious private investors. The socialist idea that land is a special commodity is giving way to state recognised private land markets. Government officials also look set to lose powers to compulsorily acquire farm land for private investments — the source of the many complex land disputes. What remains unresolved is the lack of independent institutions, such as courts, that are willing and capable of enforcing private land rights against the state.