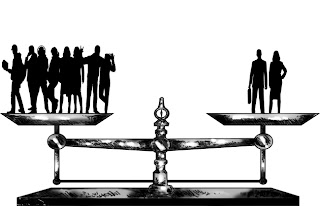 Increasing prosperity in recent years has arguably not been distributed fairly throughout the population. Attention to inclusive growth is overdue.

The speed at which Indonesia — the new star of Asia — can rise is not in doubt. After the painful 1997 Asian financial crisis, Indonesia has restructured, recovered and rebounded economically to become a leader of the pack. The country even performed well during the 2008 global financial crisis, emerging relatively unscathed.

Urbanization and the rise of the middle class in this “young” country, thus termed due to the average age of its working population, have given confidence to domestic and international investors. However, whether prosperity has been shared justly and fairly throughout Indonesian society has not been fully addressed.

Since the 1970s, Indonesia has been proud of its low levels of inequality. Throughout the Suharto regime, the Gini index, an inequality indicator, remained stable at around 0.30, which indicated that Indonesia was a country of low inequality by international standards.

The Gini index measures inequality within a range, varying from zero to one. The highest level of inequality would entail all economic resources being controlled by one person, and would deserve a Gini rating of one. In contrast, a state of perfect equality would be given a Gini rate of zero. Since the Asian financial crisis, Indonesia’s Gini rate has risen gradually from 0.33 in 1999 to 0.41 in 2011, which exceeded the international threat level of 0.4 for social stability. There are also many trends leading us to believe that is rising still.

Horizontal inequality refers to inequality between regions and ethnic groups, and it is important in the formulation of government policy used to address large imbalances.

In Indonesia, more than 20 percent of the populations in Maluku and Papua have been counted as living in poverty. This proportion of the population has a standard of living lower than the World Bank’s poverty measurement of $1.25 a day.

However, in Jakarta the corresponding figure is around 5 percent. Moreover, urban/rural income disparity has increased. A worker in Jakarta is likely to earn seven times more than a worker in Sulawesi. This disparity leads people to migrate between provinces, but this mobility can also lead to social problems in major cities, especially when it occurs in large numbers. In Jakarta for instance, there are more than 300 slum areas which are mostly occupied by informal workers. This influences the city’s development by complicating land ownership and adds to the problems of implementing effective social policy.

Conversely, the rich in Indonesia have been able to enjoy the fruits of economic growth on an unprecedented scale. According to the Forbes rich list, Indonesia’s top 10 billionaires have a combined wealth of more than $50 billion. Moreover, the top 40 richest Indonesians have a combined wealth equaling more than 10 percent of the 2012 total gross domestic product. The top 20 percent of the population, by income, account for nearly 50 percent of total expenditure, and this is increasing year by year.

With high inflation, Indonesia’s economic growth is not as beneficial for the poor as it is for the rich.

The government has made efforts to reduce the impacts of price rises and assist the poor. The Raskin scheme provides rice to low income families, there are scholarships for poor students, and Jamkesmas provides a social health insurance system for the extreme poor.

However, the true effectiveness of these programs has been questioned. For example, Raskin is thought to be liable to leakage due to ineffective monitoring, difficulty in achieving agreement on the price of subsidized rice and underdeveloped infrastructure leading to high delivery costs.

Moreover, all the programs present a dilemma for the government: do they deliver social benefits to the right groups and should we be more concerned about solving the rice supply problem rather than subsidizing the shortage?

Not only does current policy need close examination to judge its effectiveness, but alternative and perhaps more innovative policies have to be designed.

To maintain and sustain healthy economic growth, informal labor could be transformed by creating new job opportunities. This would require a government policy that protects domestic and foreign direct investment. High-quality practical education is important to break the cycle of poverty.

Arguably, the current income tax system is ineffective as a redistributive tool. However, a well-designed wealth tax could help the government to influence the top end of the distribution and thus make the economy more balanced.

Indonesia should be proud of its economic prosperity, its continued impressive growth, and how far it has come over the last decade, but we should also think about whether this prosperity is benefitting all or just benefitting the few. It is important to remember that 100 million Indonesians currently scrape by on $2 a day. They also have the weakest voice. Improving their lives and reducing inequality is the real test for Indonesia’s government. To sustain harmony in society with economic growth, the government must respond to the challenge of creating a fair and just society.
Taijin Long is a researcher at Strategic Asia, a consultancy promoting cooperation between Asian nations.