Can Vietnam have a one-party, two-candidate system? 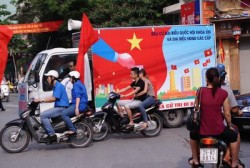 Vietnam has embarked on one of the greatest and most exciting political reforms in the last two decades — the rewriting of the national Constitution.

Many constitutional issues are up for debate — the role of the ruling Communist Party of Vietnam (CPV) in state organs and in society; the role of the armed forces; state versus private management and ownership of land; and the mechanisms needed to protect citizens’ and human rights.

In February, ‘Group 72’, a collection of 72 former high-ranking Party officials, well-known intellectuals, veterans and others, completed a Western-style draft constitution and submitted it to an ad hoc parliamentary body known as the Committee for Draft Amendments to the existing 1992 Constitution. This move led many to think that the rewriting of the Constitution would be in the hands of the people, rather than in the hands of the Party. However, this feeling did not last long. A few weeks later the CPV chief mentioned what he called ‘the decay and degradation in ideology and ethics’ at a meeting outside Hanoi. The criticism was interpreted as being aimed at those who had made constitutional suggestions, including Group 72, which clashed with the CPV-directed draft.

In its submission, Group 72 suggested that in order for Vietnam to have an effective democracy it needs a multi-party system, or at least competitive elections. But this was unacceptable to the CPV, whose vision for Vietnamese democracy is socialist-oriented and CPV-led. The CPV does not reject competitive elections, but it insists that the candidates be nominated by the CPV or the Fatherland Front, a mass CPV-led organisation.

One manifestation of democracy is democratic elections that are fair, non-discriminatory and inclusive. Usually, this can only happen in a multi-party system protected by a system of checks and balances and the rule of law to ensure fair competition. To Western political theorists, Vietnam is far from having these conditions. But this does not mean it cannot have fair and competitive elections within a one-party system. A political compromise by all sides for the country’s development could create the conditions needed for fair and competitive elections within a one-party system.

The Vietnamese population seems to be strongly supportive of CPV rule. This is especially thanks to the responsiveness of the state to society’s demands, and the country’s social stability. Frequent farmer protests challenge this argument, but these protests are aimed at local government, not the central government, and there has never been a mass protest against the CPV’s rule. The role of the CPV in national independence and unification, as well as high economic growth during early Doi Moi, should be recognised, but criticisms have been levelled at the CPV for recent economic lows and rampant corruption.

The CPV must be accountable to the people, as the current draft constitution suggests — something the CPV can do by ensuring fair and competitive elections. The role it might play in these elections could be introduced as an ‘impartial judge’. This means it will let candidates compete with each other freely in compliance with the rule of law. The CPV can nominate its own candidates and will, no doubt, always do so. But it must also create space for independent candidates who are able to gather the required number of signatures. In this sense, the independent candidates do not need to have their own political parties. This is what can be labelled a ‘one party, two-candidate system’. However, to make it effective, the system must be constitutionalised.

This system is not yet in place at the national level, though a two-candidate election model has operated at the subnational level within the framework of grassroots democracy — an experimental political project initiated by the CPV in 1998. Not many independent candidates were elected due to party influence, but some were successful. Practical experience shows that a number of conditions are needed for success. They include, but are not limited to, non-intervention of the CPV, the competence and credibility of the candidate, and strong citizen participation.
Vietnam has long been seen by Western political theorists and politicians as having a one-party rule, one-candidate system. Despite political reforms, CPV candidates remain dominant in all three branches of power and many are, therefore, sceptical about the meaning of these reforms.

The current rewriting of the national Constitution is a good opportunity for the CPV to begin reversing this sentiment. It should formalise the one-party, two-candidate system at the national level, following its experimental successes at the subnational level. This system would also be a good step in the direction of democratic reform. If Vietnam makes this system work, it would create a model for the other remaining communist countries to follow.
Hai Hong Nguyen is a PhD Candidate in the School of Political Science and International Studies, University of Queensland.