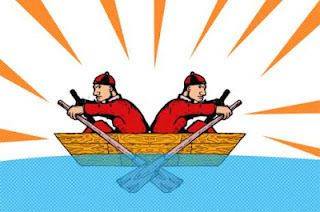 Chinese Foreign Minister Wang Yi ended his tour last week of four Asean countries - Singapore, Thailand, Indonesia and Brunei - by reaffirming his country's recalcitrant position on its so-called nine-dash line, which gives it sovereignty over the South China Sea almost up to other countries' doorsteps.

The message that Wang delivered left no doubt of the continuity of the policy shaped by the preceding Chinese government towards its disputes over territory and sovereignty in the South China Sea with the littoral nation claimants: Brunei, Malaysia, Philippines, and Vietnam.

The Chinese stance on the disputes can be summarized in two points: first, China says it has sovereignty over all the waters and islands in the South China Sea as reflected in the nine-dash line, also called the 'cow tongue line.' Second, all disputes shall be settled on a bilateral basis.

During bilateral talks or at press conferences, Wang's speeches showed a more assertive and tougher attitude by China than the one that had been represented by Chinese Communist Party chief and President Xi Jinping during his visits to military area commands in the South and talks to seamen in Hainan last month. Wang also accused "some countries of stirring up troubles in South China Sea for their own interests" - the Philippines, Vietnam and possibly the United States.

While Wang was still on his four-nation tour, some Chinese scholars and hawk generals in the People's Liberation Army (PLA) made aggressive statements, with one commentator even speaking of the possibility of opening fire on the Philippines as a method of intimidating Vietnam from defending its share of the disputed islands in the sea.

The contrast in rhetoric between Chinese diplomats (excluding intimidating speeches) and military generals has made countries in the region, particularly those having territorial disputes with China in the South China Sea, highly sceptical of Chinese good will, which is sometimes called for by many in an effort to get the giant to the north to act more responsibly in regional and global issues.

Chinese diplomacy had been seen as wise, but Wang's four-nation tour did not demonstrate that and even may have been counterproductive because it aroused the vigilance of regional countries. In this respect, the lowest point was Wang's fly-over the Philippines and Vietnam, the two Asean nations that are having almost daily face-to-face quarrels with China in the South China Sea.

Wang's ignoring and bypassing these two countries can be construed that China was playing the card a big country can play by defying small states. Why didn't Wang visit the Philippines and Vietnam, but instead went to others to talk about their disputes against them? The above four nations play a considerable role in Asean in general and on the issue of South China Sea in particular.

However, there are two factors that China did not calculate strategically or which it underestimated. First, national sovereignty is inalienable, regardless of being small or big. Countries also never compromise it. Hence, giving up or retaining their national sovereignty is subject to a decision taken by governments and their peoples. External opinions are of reference and only significant should they be considered constructive and impartial.

If it feared the consequences, the Philippines would have not filed an arbitration case against China under the United Nations Convention on the Law of the Sea. Moreover, the Philippines is also building up its defence capacity to protect its sovereignty over the disputed islets.

Likewise, for Vietnam, the history of this small nation is that it has never surrendered to foreign aggressors. Furthermore, nationalist sentiment in Vietnam is no less than that in China in respect of the sovereignty issue.

Second, some analysts said the aim of Wang's four-nation tour was to sow divisions within Asean. If so, it didn't happen. Asean seemingly achieved a better consensus on the issue of the South China Sea after the Asean Summit held April 24 and 25 in Brunei, although optimism is not really high given the black spot left from Cambodia's refusal in 2012 to have the issue mentioned in a post-ministerial statement when it hosted the meetings last year.

Some high-ranking Asean officials have called for creating a united front on the issue. Many Chinese and regional scholars have warned that China's refusal to compromise on the issue costing the country its image as a peaceful regional superpower.

Wang's tour could have provided a good chance to rebuild the image of a more friendly China in the eyes of the regional states. Regrettably, the strategic miscalculation in setting up the tour made it counterproductive. Countries in the region now are more watchful of the disparity between China's rhetoric and its deeds.

Despite China's rhetoric about a strategic partnership, both sides are still in the process of confidence building. As a consequence, even if a Code of Conduct (COC) is achieved now, its practicability is questionable.

China may do whatever it wants in the pride of being a big country and may well even use force to seize the islets, but it will have to pay a price. If things go as the country threatens, the 'China Dream' enunciated by incoming President Xi Jinping will never come true.

(The author Hai Hong Nguyen is a PhD candidate at the University of Queensland, Australia)