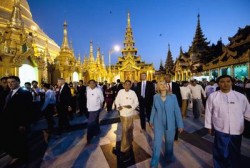 An important aspect of the current reform era in Myanmar is the retreat of the Tatmadaw (the Myanmar Armed Forces) from the day to day workings of government.

This is the case despite (or perhaps because) the current Union of Solidarity and Development Party government is comprised primarily of serving or retired military officers. In particular, the reconfiguration of the political system and the relaxations on civil society has allowed and encouraged new participants in the political process. The military is now prepared to work with their former enemies, as demonstrated by the growing prominence of Aung San Suu Kyi and the National League for Democracy Party in Parliament, and improved relations with the West.

These changes are an important development for an underpinning rationale of the Tatmadaw’s rule — that is, the ‘praetorian ethos’ or belief that they are the only institution capable of defining and protecting the interests of the state in a perceived hostile environment of multiple threats. By engaging with other participants, the Tatmadaw are opening new pathways which could fundamentally change this stance.

Yet the Tatmadaw retains authority in constitutional matters and control of security portfolios, which demonstrate the persistence of the praetorian ethos. They are an independent organisation not subject to parliamentary oversight, with direct control of the ministries of Defense, Interior and Border, and have a majority on the powerful National Defense and Security Council, the country’s most important executive body.

If Myanmar is to continue to evolve into a free and democratic system, civil–military relations must be fundamentally transformed. But encouraging the military’s continued retrenchment from the government will be a long-term process. It will most likely be made up of incremental changes so that the Tatmadaw can carve out a new institutional identity and position within the political structure. The immediate challenge is to create room for civilian involvement in security matters, but the eventual goal would be for the military to move from a position of completely directing the process to one of advising the government and carrying out directives.

Ethnic unrest is the major arena for determining the future of civil–military relations. Burma’s ethnic minorities, who represent a third of the population, have been victims of decades’ long military campaigns and atrocities, so they are weary of the military’s continued political involvement. Although initially overshadowed by a focus on democratisation, ethnic matters are one of the most important issues facing Myanmar and moves towards a federation will most likely be the next major area of reform.

But ethnic tensions go beyond adversarial relations with the military and exist in a larger societal context of ethnic mistrust and hostility. The military and police have also been accused of allowing civilians to attack ethnic minorities, raising suspicions they are promoting ethnic strife. If the breakdown in ethnic relations led to Myanmar’s destabilisation, the military could use this situation as justification for reasserting itself in the political sphere.

The Myanmar government (and the opposition as a potential government in waiting) must take certain steps if they want to reduce ethnic tensions, and build new relations with ethnic minorities. They must be willing and able to strictly control military activities in ethnic regions. The military as a national institution has a vital role to play in this process of reconciliation but civilian control must be cemented to ensure ethnic violence does not become a strictly ‘security’ matter under the exclusive purview of military authority.

Myanmar is in a period of transition from direct military rule to civilian control, but there is no guarantee the political system will eventually be free from the Tatmadaw’s interference. The process of democratisation stemming from military rule in other Asian states such as South Korea, Indonesia and more problematically Thailand included a transition period marked by the gradual retrenchments of the military from the political system. So reformers in Myanmar must cautiously and slowly work with the military to rearrange their duties and responsibilities while making deeper normative changes in the civilian–military relationship. Already there are tentative signs this process is underway in the division of foreign relations, with Tatmadaw generals meeting their military counterparts and leaving diplomatic meetings to government representatives.

The inability to resolve ethnic conflicts poses a great threat to national unity. Ethnic relations is the issue which will determine the extent to which civilian authorities can become involved in security issues and include them in a wider policy process of ethnic reconciliation. The military’s acceptance of the legitimacy and competency of civilian governments to direct and determine security policy will be put to the test. Ultimately, the willingness of the Tatmadaw to abandon its praetorian ethos of directing the political process, specifically over security policy areas, will determine whether the system remains primarily in the service of regime maintenance or becomes an arena of increasingly diverse, free and fair political discord with the possibility of power being assumed by those that are non-military.