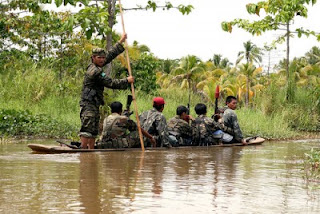 Signs of progress have been slow to appear in Thailand’s troubled south three months after Bangkok first publicly agreed to help Malaysia negotiate a resolution. Killings have also escalated, indicating the limits of Kuala Lumpur’s influence over Muslim separatists.

Among the dead are five paramilitary rangers who were killed during an ambush last week when suspected rebels detonated a bomb buried under a road. The rangers were en-route to a meeting with Muslim leaders in Pattani amid talks about the conflict that erupted on a broader scale in 2004 and has since claimed more than 5,500 lives.

By enlisting Malaysia as a “facilitator” in negotiations, Thailand had raised hopes that perhaps some kind of agreement might be reached with the shadowy outfits demanding a homeland in Thailand’s three southernmost provinces, which were annexed by Bangkok more than a century ago. Some have also expressed hope that the killings might abate while talks are ongoing.

Kuala Lumpur played an active role in securing a peace deal last year between the Philippine government and Muslim rebels who were demanding autonomy in the Philippines’ south.
But Philippines-based rebels employed by the self-anointed Sultan of Sulu, Jamalul Karim, later turned on Malaysia, launching an insurgency in the eastern state of Sabah in March that cost more than 70 lives.

In Thailand, the Patani Freedom Fighters, or Pejuang Kemerdekaan Patani, and the National Revolutionary Front-Coordinate (BRN-C), with its roots dating back to the 1960s, are the most prominent of several groups linked to the fighting. The local word for the insurgents is juwae.
The latest deaths in Southern Thailand came shortly after a shootout in Narathiwat where another ranger and a suspected militant were killed during a raid on a suspected hideout. A warning was made by rebels earlier this month through a leaflet drop that women and children would not be spared by the insurgents.

There were also territorial complications as the Philippines does not recognize Malaysian sovereignty over Sabah, much to the annoyance of leaders in the capital. They became involved with the peace process if only out of self-interest and an understandable desire to see their interests in Sabah protected.

However, apart from a shared border and a religious affiliation with Muslims in the South, Malaysia does not seem to have any real influence in Thailand. Its attempts to broker talks with the rebels amid a rising death toll could prove more of an unwanted distraction than a real help.

Image credit: Flickr (kitoy) By Luke Hunt for The Diplomat