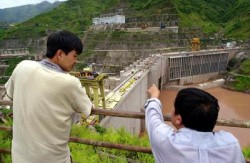 Over the last two decades, Chinese governments have approved the construction of a cascade of large dams on the stretches of the Mekong River that lie within its borders, prompting disquiet amongst downstream riparian states.

Those states — Cambodia, Laos, Thailand and Vietnam — are now set to wage their own battle for control of precious water resources, with China looming large through its role as a willing creditor.

Despite hydropower plans for the Lower Mekong dating back to the 1950s, the river still flows freely south of the Chinese border. That may not be the case for much longer. The governments of Cambodia, Laos, Thailand and Vietnam have proposed to build eleven dams on the Lower Mekong — nine in Laos and two in Cambodia. Much of the electricity generated would ultimately be consumed in Thailand and Vietnam through contract agreements between the four states. The first of these proposed dams is already under construction; and on 7 November 2012, Laos and Thailand held a ground-breaking ceremony at the site of the Thai-funded Xayaburi Dam, defying the Mekong River Commission’s call for a 10-year moratorium on dam-building along the Lower Mekong.

Although China’s upstream activities on the Mekong have generated distrust and disapproval further down the river, recipient governments have still enthusiastically welcomed large Chinese investments in Southeast Asia. Laos is a case in point. Of the nine proposed Laotian Mekong mainstream dams, Chinese financiers and developers have interests in at least four. China also has a stake in about half of the proposed 63 dams on Laotian Mekong tributaries. Outside of hydropower, Laos’ ruling politburo is now negotiating the terms of a US$7.2 billion Chinese loan to finance construction of a long-awaited high-speed railway between the two countries. That loan represents nearly 90 per cent of Laos’ US$8.3 billion GDP.

As a water engineer in Laos, China is acting in direct accordance with its strategic interests. It is locking up electricity supply deals and protecting regional geopolitical interests by securing crucial developing Southeast Asian neighbours as long-term debtors through high-interest loans. For the Laotian government, a potential future for their country as the ‘battery of Asia’ could just be a pathway to greater economic independence and long-awaited development.

However, Chinese dam building in Laos could also have serious negative consequences. The potential environmental impacts of large dams are well-documented — sediment build-up, landslides, destruction of fisheries, even seismic shifts. The Lower Mekong Basin is currently the largest inland fishery in the world. Laotians and Cambodians are particularly reliant on fish caught from the river to meet their protein needs; construction of the 11 planned dams would lead to an estimated 26–42 per cent loss in annual fish production. Even the apparent economic benefits of major investments in dam infrastructure and other major projects could prove to be a double-edged sword — inflation exacerbated by such large influxes of capital could cause cost-of-living pressures for many Laotians.

How China distributes its largesse across Southeast Asia, including in Laos, will significantly determine the degree to which it builds crucial regional support in a multi-polar geopolitical order. Perceptions that China uses aid and development assistance to win friends and buy political leverage in its neighbourhood will likely enhance suspicion of its long-term intentions. The region south of China’s border is already part of the ongoing contest between the United States and China for support in the Asia Pacific. The United States has launched its own Lower Mekong Initiative and in July 2011 Congress adopted a resolution opposing the development of the Xayaburi Dam, which could reflect an intention to limit Chinese influence in Southeast Asia. Meanwhile, China has deployed armed police vessels along rivers in Northern Laos and Myanmar to quell piracy.

As Chinese influence increases and smaller Southeast Asian neighbours are increasingly attracted to the large loans China offers, the already limited effectiveness of forums for cooperative management of trans-boundary issues may become even more pronounced. The Mekong River Commission’s call for a moratorium on dam building on the Lower Mekong has, for example, been ignored by both Thailand and Laos. Whether Chinese economic and military superiority will be sufficient to ensure ongoing peace in Southeast Asia in the absence of such forums remains to be seen. The way in which large Chinese-funded dam projects in Laos are received by Thailand, Cambodia and Vietnam will be an important litmus test.

Huw Pohlner is Manager of Strategy at Asialink. He will shortly commence graduate studies on the governance of water in China as a General Sir John Monash Scholar at Oxford University.