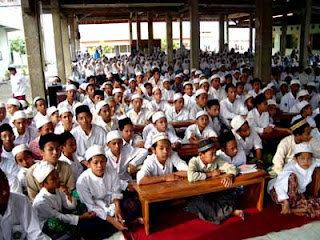 Pesantren or Pondok Pesantren are Islamic boarding schools in Indonesia. According to one popular tradition, the pesantren education system originated from traditional Javanese pondokan; dormitories; ashram for Hindu or viharas for Buddhists to learn religious philosophies, martial arts and meditation. Institutions much like them are found across the Islamic world and are called pondok in Malaysia and Southern Thailand and madrasa Islamia (Islamic madrasa) in India and Pakistan and much of the Arabic speaking world. Pesantren aim to deepen knowledge of the Koran, particularly through the study of Arabic, traditions of exegesis, the Sayings of the Prophet, law and logic. The term pesantren derives from the root word santri or student -- pe-santri-an or the place of the santri

As social institutions, pesantren have played a major role over the centuries. They emphasise cores values of sincerity, simplicity, individual autonomy, solidarity and self-control. Young men and women are separated from their families, which contributes to a sense of individual commitment to the faith and close bonding to a teacher. (Wikipedia)


The Islamic radicalism that evolved after the 1998 reform depicts a revival of Islam. Unfortunately, this resurgence also indicates a cultural and historical decline of Islam in Indonesia. The re-Islamization process in this matter is of course contrary to the nature of Islam in Indonesia which is cultural, tolerant and substantive.


Islam in Indonesia country is considered cultural, which is why politics is rarely used as a tool in conveying Islamic teachings.

On the contrary, Islam has been firmly entrenched in the culture of the country. Thus, Islam in Indonesia has given birth to a variety of manifestations of “Indonesian-Islamic culture” which are different from Islam in Middle East. This is the result of a process of indigenization of Islam, rather than re-Islamization, which has occurred since the 13th century AD.

The process of this inter-cultural encounter is considered a tolerant and substantive practice of Islam. Interestingly, tolerance and Islamic substance were developed by two religious disciplines regarded as “queens of the knowledge of Islam” in the country, especially in pesantrens or Islamic boarding schools. The two queens are sufism and fiqh, or Islamic jurisprudence. It seems that these “two queens of knowledge” could become the solution to Islamic radicalism.

At the beginning of this Islamization, fiqh-sufism appeared as the method and content of Islamic preaching. These particular methods of understanding and practice of sharia are carried out through tassawuf or spirituality. The discipline of law and spirituality began to be developed simultaneously by wise preachers known as Walisongo.

The wave of peaceful Islamization was historically enhanced by the Javanese ulema network in Mecca. After their return to the country at the beginning of the 20th century, they established pesantrens. In these schools, Islamic preachers such as Kiai Hasyim Asya`ari, Kiai Khalil Bangkalan, Kiai Mahfudz Termas, etc sharpened methods of sharia science in a comprehensive manner. In this way, the progress of Islamization in the archipelago fueled by the establishment of schools appeared to be based on fiqh-Sufi Muslims. What this meant to the level of religious behavior is that Islamic boarding schools were made up of people who adhered to fiqh through the deepening of tassawuf.

Why? Because fiqhiyyah practices are conducted in the framework of spirituality. In the words of Rumi, “Sufism changes the law into wisdom”. Hence, a religious boarding school is not an escape: ignorant and isolated from the world.

From these explanations, a conclusion can be drawn. Islamic radicalism can be cured through the introduction of Islamic legal rationality and the spirituality of Islam. At this point, the style of Sufi Islamic fiqh that strongly characterizes Indonesian Islam could be an ideal model for “healing” Islamic radicalism.

Contradictory to these findings, a research conducted by the Indonesian Religious Affairs Ministry uses a framework based on the ideological history of pesantren, namely the ideology of Islamic boarding schools that are based upon tawassuth (middle way), tasammuh (tolerance) and tawazun (equilibirium). Most of the Islamic boarding schools in Indonesia, especially those affiliated with Nahdlatul Ulama (NU), prefer salafiyah as an ideological basis for science-based classics and ahlussunah wal jama’ah as the methodology in the teachings.

The characteristics of moderate Islamic boarding schools are basically the same as findings of my historiographical quest concerning Sunni Islam from the perspective of Western scholars, namely: 1) no rebels against the established system; 2) rigidity and determination to maintain unity against all forms of disintegration and chaos; 3) preference for the concept of the congregation, and the supremacy of the sunnah, more widely known as the ahlussunah wal jama’ah; 4) adherence to the middle ground, tawassuth, striking a balance between theology and extreme politics (Khawarij) and Shia; 5) to manifest themselves as “a normative society” by maintaining the principle of spiritual freedom and upholding ethical standards and sharia. 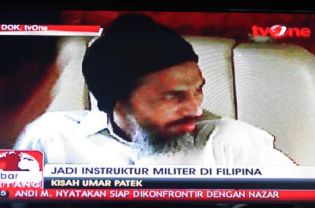 Strategic steps to counter radicalism have been so far taken:
(1) dissemination of moderate thinking. This activity is carried out in several places through dialogue, focus groups and seminars. Moderate thinking in Islamic boarding schools is an example of one topic being raised. (2) Research Action. This activity is carried out through assistance to pesantrens that are potentially radical. One example of this is the action research in economics mentoring at al-Islam pesantren in Lamongan, East Java. Through these action research activities, a shift in ways of thinking toward openness and acceptance of others has occurred.

In the future, affirmative action is still needed both in the form of dissemination of ideas and development of moderate education in Islamic boarding schools that are assumed to be radical, more specifically in the development of national education standards.

Abdurrahman Mas’ud, Jakarta - UCLA graduate, is head for the Religious Education Research and Development Center at the Religious Affairs Ministry.