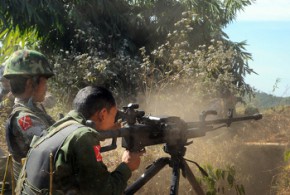 Myanmar faces "many grave challenges and concerns, particularly in respect to the protection of human rights, including freedom of religion," a Christian human rights NGO declared today following a four-week fact-finding visit to the country.

Christian Solidarity Worldwide said it welcomed the signs of political change in the country, including "significantly increased freedom" for media, civil society and political actors, and improvements in freedom of expression in some areas despite its human rights concerns.

In addition to visiting the capital, Naypidaw, and Yangon, Myanmar's major city, the NGO visited Kachin State, in northern Burma, where at least 100,000 civilians have been made refugees in a two-year continuing conflict...CSW also visited a Muslim community near Naypyidaw, three days after an attack by a militant Buddhist mob.

Noting a new "climate of openness" in Yangon and other cities, the report nonetheless details horrific torture of Kachins including "some of the worst accounts of human rights violations CSW has ever documented."

One Kachin former prisoner described the torture he endured during interrogation, including being hung upside down for a day and a night, beaten and attacked with knives. "They put a hand grenade in my mouth and threatened to pull the pin ... then they put a plastic bag over my face and poured water over it," he told the NGO.

The wife of one current Kachin prisoner described seeing her husband after he had been tortured. She told CSW: "He was covered in blood, and his nose was broken...An iron bar was rubbed along his legs. He was forced to engage in homosexual sex ...He was told that as he was a Christian, he should kneel on very sharp stones with his arms outstretched like Christ on the cross...He was beaten on his hands and arms."

Lord Alton of Liverpool, a member of the House of Lords in the British Parliament, accompanied CSW to visit Ayela, where a Muslim community was attacked on 22 March by Buddhists who burned the village's madrassa to the ground and desecrated and damaged the mosque severely.

"We Muslims have lived here for 200 years with no problems," a representative of the community told the NGO. "But now there is absolutely no communication with our Buddhist neighbors. We don't dare greet each other on the street."

"Our findings show that while there are some very welcome reforms in Burma, which should be acknowledged and encouraged, there remains a culture of impunity which needs to be addressed," CSW's Advocacy Director Andrew Johnston said. "There is an urgent need for protection for religious and ethnic minorities, inter-religious dialogue and peace-building, humanitarian assistance for those displaced by conflict and violence and a meaningful process for political dialogue involving all the ethnic nationalities to end decades of war.

"The Government of Burma must address these grave concerns as a priority and the international community should develop a clear strategy to promote human rights and genuine democratic reform, counter religious intolerance, promote reconciliation and advocate protection of freedom of religion or belief in Burma. Failure to do so will result in hopes dashed, and further instability, conflict, fear, death and destruction."

Christian Solidarity Worldwide works for religious freedom through advocacy and human rights, in the pursuit of justice. Asia Sentinel