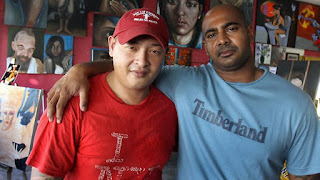 ONE of the saddest moments of my political career was in December 2005 when a young Australian drug trafficker Van Tuong Nguyen was executed at the Changi Jail in Singapore.

John Howard and I had begged the Singaporean government ffrom the prime minister down  for clemency. Every legal manoeuvre had been tried. But the Singapore government decided to stick with their established policy and hanged the 25-year-old.

I rang the Australian High Commission staff who had counselled Van Nguyen for three long years since his arrest. They said he died bravely. His mother had wept in their arms. It was a hugely emotional conversation.

This execution happened eight months after the arrest of the group of nine Australians in Bali for trafficking 8.3 kilograms of heroin from Indonesia to Australia.

Of course the Bali Nine were foolish and greedy - the heroin was said to be worth $4 million. They knew that the penalty for drug trafficking in Indonesia was death. That's true in most of South East Asia.

When I was told of the arrest of the Bali Nine I knew it would be a struggle to save their lives. President Yudhoyono is a good man in so many ways but he does believe the death penalty is an effective deterrent for drug trafficking and use.

It's one thing to read about this, to theorise, to argue about the morality of the death penalty and to contemplate its effectiveness. And to say that the Bali Nine went into this with their eyes open; they took the risks knowingly.

I can tell you, it's another thing to sit down with the families of these young people on death row. I had several teary meetings with the family of Scott Rush.

Eventually, his death sentence was reduced to life imprisonment.

Several of the other members of the Bali Nine were also sentenced to either life imprisonment or twenty years behind bars.

But two of the Bali Nine, Andrew Chan and Myuan Sukuaran, are still on death row. They have exhausted the judicial system. Their only hope of avoiding a firing squad is if the President grants clemency.

For Foreign Minister Bob Carr and the Prime Minister as well, this is a huge challenge. They share with the Indonesian Government a determination to stamp out heroin trafficking knowing the damage heroin does to users.

They value the relationship with Indonesia, which has been handled pretty clumsily in recent times, particularly over boat people and the live cattle trade. And they oppose the death penalty.

The challenge for the Australian Government is to get the President to grant clemency. They need to be working on it right now.

Here are a couple of don'ts and a couple of dos. For a start, this is not a negotiation which should descend to Twitter and other media stunts, particularly by the Foreign Minister. I know Bob Carr loves Tweeting his activities. On this issue he should  uncharacteristically  work quietly and determinedly behind the scenes.

The surest way of failing to get clemency is to run a public campaign. That would stir up nationalist sentiment in Indonesia  a country which was once colonised by the Europeans. They don't like being told what to do by foreigners.

Remember the case in China of Stern Hu, the Rio executive? Kevin Rudd's media commentary on the case did more harm than good for him. And Schapelle Corby's support group's public campaign was a disaster.

The government should also avoiding issuing public threats either explicit or implicit. Threatening the Indonesians publicly will only get their backs up. They will make it clear that Indonesia won't be threatened by anyone.

So publicly suggesting we'll downgrade the relationship if the President fails to grant clemency won't work.

What the Australian Government should do is quietly talk to the Indonesian President and Foreign Minister about two things.

The first is quite practical. The Bali Nine had been known to the Australian Federal Police. They worked with the Indonesian government trying to track these people.

The AFP were not directly involved with the arrest of the Bali Nine but more broadly, AFP co-operation with the Indonesian authorities is important to Indonesia's anti-drug campaign.

If Sukumanan and Chan are executed, that will have a huge impact on the capacity of the AFP to work with the Indonesians. The government won't want the AFP getting close to their Indonesian counterparts on drug issues anymore.

Secondly, the execution of Sukumanan and Chan would cause outrage amongst many but not all  Australians. This would certainly re-enforce for many the negative perceptions they have of Indonesia. In turn, that would make it more difficult for any Australian government to work closely with Indonesia. There needs to be a degree of trust and goodwill between our countries. Executing our people won't help that.

This issue is a big test for Bob Carr and even Julia Gillard. Let's hope they succeed.