The cost of illegal logging in Borneo 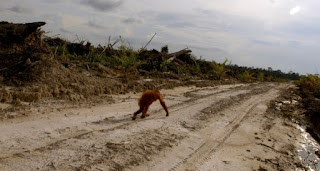 WWF has gone to Borneo to see how our projects there are helping tackle destructive unregulated deforestation. The huge island of Borneo, in the South China Sea, has three separate territories, mostly split between Indonesia and Malaysia. Report comes from the Indonesian part of Borneo, Kalimantan.

The words of Indonesia’s Secretary General of forests are ringing in my ears as our speedboat makes its way up-river towards Lanjak, deep into Borneo’s West Kalimantan province.

A few days ago, Hadi Daryanto told me illegal logging was the “price of democracy”. But to many observers, Indonesia’s decentralised approach to forest management, since its move away from being a military dictatorship, opened the floodgates to rampant destructive practices.

Surveying the landscape as we move further into Borneo I’m struck by the huge areas of land where few trees remain. It’s only in the mountains you can still see the forest that covered this entire area just a decade ago.
On the way here I’ve seen first-hand evidence of this deforestation in practice. Along just one stretch of road, scores of illegal logging operations are still flourishing. Groups of men hack their way into forested areas and build tiny roads that ferry the timber out, using homemade transporters made from bicycles.
Only four months ago an endangered two-year-old orang-utan was seized from a market trader in the district town of Pontianak, having been displaced from its natural habitat by forest destruction.

Lack of enforcement of species control has also led to a flourishing trade in birds and fish in the town’s markets.


The ‘golden age’ of illegal logging

Arriving in the port of Lanjak by boat, because the roads are blocked due to the unseasonable heavy rain, it’s hard to see where the Kapuas Hulu river ends and the town begins.
Parts of the town are more than two feet underwater, but people are still going about their daily lives as if this is normal. Neither the guesthouse we’re supposed to be staying at nor the WWF office has escaped the flooding.

I ask when the wet season starts, and every single person has a different answer. Most say there aren’t seasons any more, but after three months’ rain in Lanjak, and no trees to stem the floods, it’s hard not to make the connection between lack of trees and flooding.

This area must have looked very different during what locals call the ‘Golden Age’ of illegal logging in the early 2000s. Every day 400 trucks were transporting timber across the nearby Malaysian border to factories from where it was shipped around the world. Back in the UK we could’ve been unwittingly encouraging the destruction of Borneo’s rainforests by buying uncertified timber products such as doors and decking.

Some people were happy to have such a trade. To those connected to the industry, logging meant money, which some spent on cars, houses and their children’s education. Many others wasted theirs in ‘wild west’-style towns where prostitution, gambling and drinking were rife.
Women left at home had to work harder to tend the rice fields, and even their young children had to help out.

Because none of the logging was being taxed, local society didn’t benefit. Farmland fell into disrepair as the workers were out in the forests using chainsaws. A burgeoning wildlife trade in species such as orang-utans and hornbills – the spectacularly beaked and feathered birds once common in Borneo – has brought added devastation.


Counting the costs in Borneo today

Unja Tamambaloh, 43, was one of those who got caught up in the logging craze. Unja cut down trees in a 5km area of his own land after the logging started in 2000.

But he thinks differently now. He says: “I regret cutting down all those trees on my land. I used to be able to get wood from the forest to build my home and buildings for my family, and I made coffins from a special type of wood that grew there. But that has all gone now.

“I’m also concerned about the ecological impact of those years. Rivers have become shallow, the water quality has reduced and there are a lot more floods these days because we cut down so many trees.”

Illegal logging is still going on in this area. Just two months ago eight people were caught with 700 blocks of wood. They claimed it was for personal use, but this was not the first time they’d been caught. Their trial will start in a few months – imprisonment and fines are both an option.
Handre Gali is head of the Sungai Luar longhouse, a sprawling building half an hour outside of Lanjak, home to 38 families of the Iban tribe. During the logging boom they sold rights to part of their land to Ling, a Malaysian timber baron.

In return for the 2000 tonnes of hard wood harvested over four years, Handre used the profits to build a new longhouse, and he put two of his children through college. A third son had to drop out when the logging stopped.

Next to the ruins of the seven sawmills, closed at the end of 2004, Handre told me times have changed, and now it’s difficult for his people to buy coffee and sugar. With the forest gone people have returned to planting rice, and they now have to go much further afield to hunt animals for food, such as deer and boar.

An elderly lady tells me they can’t get anything from the forest now. The medicinal plants and orang-utans are no longer found nearby. Neither is the rattan once used to make flooring.
How WWF is helping – and how you can help
But in this area where so much damage has been done, WWF is trying to restore a forest corridor that will connect species, including orang-utan, with others in areas where forest remains.
And at Sungai Luar, with funding from WWF, people are growing commercial species such as rubber trees and starting to farm fish, which will give them an income in future years.

Although attempts are now being made to restore a small part of this devastated area, it’s clear that such a cycle of destruction will continue in other parts of Indonesia, and elsewhere in the world, if we don’t carefully choose the wood products we buy here in the UK.

Choosing Forest Stewardship Council (FSC) wood eliminates the chance of timber coming from illegal and unsustainable sources – and helps the people, species and biodiversity in places like Lanjak in Borneo.