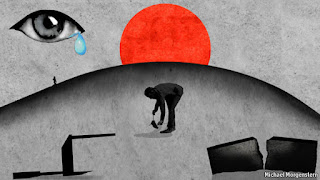 Singh's sojourn is being watched with interest by China, whose relations with both nations are troubled. The trip also offers an interesting study in trilateral dynamics between Tokyo, Delhi and Beijing, apart from providing a snapshot of how the Indian engagement with Japan might have an impact on China's attitude towards Delhi.

That Li called Singh immediately after becoming premier in March, and chose India as his first stop on his debut overseas trip conveys his urgency to lure India into the China camp. Beijing's discomfiture at Delhi's coziness with Tokyo was also showcased in a recent article by Liu Zongyi, an India-China analyst at the Shanghai Institute for International Studies, published in the state-owned Global Times, an English-language mouthpiece for Beijing.

"China's rise provides motivation for the enhancement of India-Japan relations. But for India, confrontation with China is not in its national interests. Both emerging economies need a peaceful and stable regional environment to focus on their biggest domestic task -- economic and social reform and development," Liu wrote. "With the increasing of China's military power, it's understandable that India and Japan will adopt some measures to check and balance China."

It is obvious that the Chinese don't think much of the rapport between India and Japan. Against the backdrop of Singh's visit, the state-owned People's Daily lashed out at Japanese politicians, calling them "petty burglars" on China-related issues and pointed to the success of Li's visit to India. .

"Before Premier Li Keqiang's visit, the China-India border standoff was hyped up by international media. The divergence and contradictions between the two countries were also exaggerated as if Sino-Indian ties had been strained suddenly," the paper said. "But what surprised the media was that China and India properly solved the issue in a short time. During Li's visit the top leaders of both countries had sincere and candid talks and came to a series of strategic consensus and cooperation. The shift of Sino-Indian ties in such a short time is a miracle. In the development of Sino-Indian ties there are several divergence and contradictions. Some countries see these differences as an opportunity to provoke dissension." "China and India have great vision and great wisdom."

Be that as it may, with Abe back in power with a convincing mandate, and seeking to resuscitate the Japanese economy, most Indian analysts believe Delhi should embrace the opportunity by forgoing its China obsession. Deeper engagement with India does seem to be integral to Abe's ambition to shepherd Japan back to Asia's center stage. He recognizes that a strong India would be invaluable for a stable balance of power in Asia.

But will Singh bite the bullet? His critics say he is diffident about cozying up to Japan due to his apprehensions over "annoying" China, even though he asserted on the eve of his departure to Tokyo that "There's a growing congruence in our interest and I see this relationship as an essential component of our vision for enduring stability and prosperity in Asia."

Indian foreign pundits are quick to point out that while Delhi's relationship with Beijing might be "the most important" one for India (as external affairs minister, Salman Khurshid said recently), synergy with Japan can be more transformative for the Indian economy. That is because unlike with China, there's no baggage of past animosity between the two, neither conflict of territorial interests nor a worrisome trade imbalance.

A vibrant strategic partnership between India and Japan, says political science professor KL Rao of Delhi University, could even be a "game changer for Asian geopolitics." "This is because most Asian countries are uneasy about China's unabashed geopolitical jockeying for regional pre-eminence, and are looking to Indian leadership to steady the power balance on the continent," Rao added. The former US foreign secretary Hillary Clinton, who left office in February, encouraged India to "look east" to maintain regional equilibrium and keep Beijing's hegemony in check.

Describing Japan as a "key regional and global partner for India," Singh is hoping his Tokyo trip to be followed by a two-day visit to Thailand, will also provide ballast to India's 'Look East' policy.

A bilateral pact on civil nuclear energy cooperation is also on the cards, say diplomats. In addition, Japan can offer technological and innovation inputs to help India fortify its primitive infrastructure architecture. In other words, the entire gamut of bilateral ties -- with a special focus on cooperation in defense, economic, energy and other areas -- will be on the table.

Negotiations for bilateral civil nuclear cooperation that lost momentum following the Fukushima nuclear disaster in March 2011 will also be brought up. While Japan has endorsed the Indo-US nuclear deal and the exemptions given to India from international technology sanctions, India's non-proliferation lobby scuppered Singh's ambition to collaborate with Japan for civil nuclear cooperation.

Adding to the complexity are Tokyo's own worries over India's past atomic tests and refusal to sign the Nuclear Non-Proliferation Treaty and the Comprehensive Test Ban Treaty, which the latter perceives to be "discriminatory". Though India has put a moratorium on further nuclear testing, Japan is seeking an unambiguous commitment.

Japanese technology could also help India extract fuel from frozen methane deposits on the ocean floor. Both sides have agreed on joint industrial activities on rare earth materials, which is crucial raw material needed in hi-tech industries and advanced weapons systems and most of whose supplies are controlled by main global producer China.

The visit also allows the two governments to review the progress of big ticket projects like the Western Dedicated Freight Corridor and the Delhi-Mumbai Industrial Corridor.

As Japan faces the prospect of a territorial conflict over the Senkaku/Dioyu islands in the East China Sea with China and threats from North Korea's nuclear program, Abe is keen to strengthen the Japanese military and improve ties with Delhi. Singh also feels that both countries "are important maritime nations." Therefore, safety and security of the sea lanes of communication, especially in the Indian and Pacific Oceans, is vital for both.

Economic ties which have been the bedrock of Indo-Japanese relations (with bilateral trade in 2011-12 reaching US$18.43 billion, a 34.33 percent jump), will be strengthened further with more commercial pacts. India will also be buying the first two amphibious aircraft from Japan, the maiden military hardware being sold to India. This would be the first export of the ShinMayya US-2 STOL seaplanes, usually regarded as being without peer in the world as a search-and-rescue aircraft.

Japan has modified its laws to accommodate the sale of the seaplanes to India, which New Delhi acknowledges as a special favor. The aircraft will be converted as a "civilian" rather than a "military" plane to get around a Japanese export ban on military systems. Israel will install the avionics for Indian use. The aircraft is believed to be the only one than can operate on rough seas, says a home ministry official.

However, despite Singh and Abe's ambitious bilateral agenda, diplomatic summitry cannot resolve all issues. Recognizing this, Abe will be paying a return visit to India before year-end to fortify ties further and to add more worry lines to China. Asia Sentinel