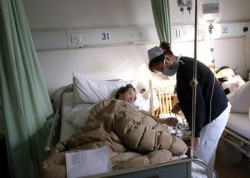 China is one country with a long-standing current account surplus, and this surplus derives from microeconomic or sectorial distortions that have led to excessive saving. In particular, underdeveloped public social safety-net systems and a repressed financial sector are commonly blamed for excessive saving.

For a long time, China has been criticised for its huge surplus, but it seems to have receded from the limelight of the global imbalances debate. China’s current account surplus has come down from a remarkable 10.1 per cent of GDP in 2007 to 2.6 per cent in 2012. But the narrowing of imbalances is cyclical rather than structural. It seems to be driven by a decline in external demand and a boost in public investment rather than changes to the country’s perennial development model. As a response to the outbreak of the global financial crisis, the Chinese government launched a huge stimulus program amounting to RMB4 trillion (US$586 billion) in November 2008. Further fiscal and monetary stimulus followed in response to the anaemic international demand caused by the great recession in the United States and the debt crisis in Europe. As a consequence, China’s fixed investment rate increased from 41.7 per cent of GDP in 2007 to about 48 per cent in 2012, while the savings rate remained above 50 per cent of GDP throughout, thereby shrinking the current account surplus.

So, with the recent rebalancing being cyclical rather than structural, it is important to understand how reforms in the financial sector, social protection and healthcare programs could affect China’s saving and investment rates and also its current account.

Our analysis suggests that further domestic financial reform would significantly contribute to a rebalancing of China’s current account surplus. The centrepiece of financial reform ought to be interest rate liberalisation. The current ceiling on the deposit rate has led to negative real interest rates (nominal interest rates minus the inflation rate) for depositors for most of the past decade. The average real return on one-year deposits in Chinese banks has been negative since 2003, in contrast to an average real rate of 3 per cent over the period 1997–2003. These negative returns reduce household income and thereby depress consumption. Interest rate reform would increase household income, which would help boost household consumption and reduce China’s excessive dependency on investment and exports.
Interest rate reform would also improve the accessibility to finance for privately owned small- and medium-sized firms, many of which currently face financial constraint in the formal banking sector because of the lending rate floor or loan quotas imposed by the People’s Bank of China. Such reform would reduce the savings rate in the private corporate sector because firms with better access to bank credit would no longer have to rely so much on retained earnings to internally finance themselves.

While we find that increasing social protection expenditure increases national saving for industrialised countries, it reduces national saving for developing and emerging economies like China. Moreover, increases in public social security spending have a negative effect on investment. This may be due to shifts of resources from traditional, more manufacturing-oriented, investment-intensive sectors to more service-oriented and less investment-intensive sectors, such as senior care and healthcare. In China, healthcare expenditure has been a persistent negative contributor to the Chinese current account.

Strengthening social security, healthcare and pension systems will make significant contributions to structural rebalancing of the Chinese economy. Without it, the limited coverage of or accessibility to social safety nets, public health insurance and the public pension system would continue to motivate households to save for a rainy day. Reforms that strengthen the social safety net such as wider social security coverage and a more accessible public healthcare system will help discourage precautionary saving and raise consumption levels of Chinese households.

Moreover, a more equitable distribution of income among urban and rural households through public transfers would lower the vulnerability of low-income groups to shocks and strengthen their consumption, which would also have an aggregate impact on household consumption. Our simulations suggest that China’s current account surplus would decline significantly if the country increased its healthcare expenditure to a level comparable to that of Brazil, another fast-growing emerging economy. The decline in the country’s current account surplus would mainly derive from a fall in the level of national savings. As such, the plans recently unveiled by the State Council to boost the social safety net programs will not only help reduce inequality, but also correct macroeconomic imbalances.

How Chinese saving and investment rates develop in the coming years is a matter of crucial importance not just for China but for the entire world economy. In China, as elsewhere, microeconomic reforms are important to correct macroeconomic imbalances. China needs to further reform its financial sector and increase public social security spending to shrink its surplus in the long term. These changes would also help the country get on a path of sustainable and equitable development.

Hiro Ito is Associate Professor of Economics at Portland State University, Oregon.
Ulrich Volz is Senior Lecturer at SOAS, University of London, and Senior Research Fellow at the German Development Institute.
This article is an abridged version of an article published in the Review of International Economics.