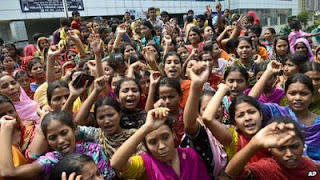 Garment workers have increased their demands for higher wages in Bangladesh

Change is possible. “If Cambodia can do it, why can’t Bangladesh?”

The collapse of the Rana Plaza factory complex, in Bangladesh, last month is now the deadliest accident in the history of the garment industry, and one of the worst industrial accidents ever. Coming after a string of South Asian factory fires last fall that killed hundreds of workers, it provides painful evidence that, two decades since big Western companies started adopting codes of conduct for their suppliers, too little has changed. The problem isn’t so much evil factory owners as a system that’s great at getting Western consumers what they want but leaves developing-world workers toiling in misery.

Most of us have a sense that low prices in Dubuque have something to do with low wages in Dhaka, but that’s just one aspect of the pressure that we as consumers exert on global supply chains. Our insatiable demand for variety and novelty has led to ever-shorter product life cycles. In consumer electronics, the average product is replaced in just eight months. The rise of fast fashion means that clothing stores get new products almost every week. Richard Locke, a political scientist at M.I.T. who is an expert on global supply chains and the author of the new book “The Promise and Limits of Private Power,” told me, “Instead of buying lots of inventory with long lead times, brands wait as long as possible before ordering.” That way, they can ramp up production if a product takes off or shut it down if the product bombs.

Flexible supply chains are great for multinationals and consumers. But they erode already thin profit margins in developing-world factories and foster a pell-mell work environment in which getting the order out the door is the only thing that matters. Locke says, “Often, the only way factories can make the variety and quantity of goods that brands want at the price points they’re willing to pay is to squeeze the workers.” Suppliers in the garment industry rarely have contracts that last more than two seasons. “If you don’t deliver on time,” Locke says, “you don’t get the next order.” The problem is made worse by the fact that many of these factories are simply poorly run, with managers who generally have little training. This means that profits are smaller and there’s less money to pay workers or to invest in better conditions. And since in many developing countries, including Bangladesh, labor unions are frowned upon, there’s no one to speak up for workers in these factories. So safety becomes an afterthought at best.

Western companies’ preferred solution has been to create codes of conduct for their suppliers, backed up by factory audits. Unfortunately, as Locke has found in a detailed study of companies like Nike and Hewlett-Packard, corporate codes can accomplish only a limited amount. Auditors often miss serious problems—two of the factories in Rana Plaza had recently passed audits. And suppliers are adept at gaming the system, turning the typical audit into what Locke calls a “ritual of compliance.”

Just as most Western consumers seem reluctant to pay more for T-shirts, most Western companies have been reluctant to take real responsibility for what happens on their suppliers’ factory floors. But, if they’re serious about preventing future Rana Plazas, there are measures that these companies could take—from helping pay for safety improvements in developing-world factories to investing in training for managers. Locke studied two Nike suppliers: one worked closely with Nike to improve performance and working conditions; the other maintained more of an arm’s-length relationship. The factory that Nike worked with not only was significantly more productive but also had higher pay and better working conditions.

Even so, while there is much that companies can do themselves, the real lesson of the past two decades is that if labor standards are actually to improve government has to play a role. Private power alone won’t cut it: as long as consumers and companies insist on the lowest price and endless variety, there’ll always be factories that are willing to cut corners to get the business.

It’s encouraging, then, that Bangladesh has announced that it will work with the International Labour Organization to institute and enforce minimum labor standards. There’s understandable skepticism about the government’s ability to achieve this, given widespread corruption, and there’s also concern that tougher standards will lead Western companies to pull out of Bangladesh. Yet research shows that smart regulations work, particularly when they’re backed by international pressure. A recent study of reforms in Indonesia in the nineteen-nineties demonstrated that they improved conditions without increasing unemployment. Locke points to the Dominican Republic, where an “incompetent and corrupt labor inspectorate” has been overhauled, working conditions have improved, and the country’s export industries have become more competitive. And in Cambodia the Better Factories Cambodia program, administered by the I.L.O. in collaboration with the Cambodian government, has significantly improved not just working conditions but also workers’ rights, even as Cambodia’s exports have grown briskly. The program has its critics, and Cambodia is still no workers’ paradise. But, when you consider that these reforms happened in a country with a shaky government, recovering from tremendous civil strife, and building a garment industry from scratch, their success suggests that change is possible. As Locke succinctly put it, “If Cambodia can do it, why can’t Bangladesh?” ♦ by James Surowiecki for The New Yorker