Experimenting with the Chinese currency 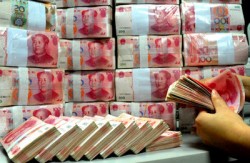 After becoming the new Chinese leader, Xi Jinping chose Shenzhen as his first visit outside Beijing and made the Qianhai special economic zone his first stop in Shenzhen. This was a clear signal of Qianhai’s position at the forefront of further reform and opening in China.

Qianhai is only 15 square kilometres in size and, according to its industrial planning regulations, 50 per cent of its area is allocated for use by the financial industry. The Qianhai Financial Industry Plan has made the internationalisation of the renminbi (RMB) the top priority for the experimental zone’s financial innovation. In fact, most of Qianhai’s reforms have been measures facilitating the internationalisation of the RMB.

In January 2013, Qianhai launched a cross-border RMB loan scheme — 15 Chinese companies located in Qianhai borrowed a total of two billion yuan from 15 banks based in Hong Kong. At the same time, the central government approved another of Qianhai’s innovative programs: allowing certain state-owned financial institutions to raise RMB in Hong Kong and establish a ‘fund of a fund’ (similar to a private equity fund) in Qianhai. Both projects promote the flow of the RMB back to the mainland from Hong Kong, where RMB reserves have been accumulated.

In the future, it is likely that Hong Kong’s investors will buy financial products with RMB in the Qianhai Foreign Exchange market and that mainland investors will buy Hong Kong securities with RMB through the same platform, spurring the RMB’s cross-border circulation. Since China cannot immediately liberalise its capital account, these innovations will not be widely employed in China. But it is clear that Qianhai is a pilot program for internationalising China’s currency and opening up the capital account.

Why did China’s central government choose Qianhai as an experimental zone?

Qianhai’s experiments in internationalising the RMB have another significant purpose — to set up a ‘reverse transmission mechanism’; that is, to force internal financial reforms. Many Chinese officials and scholars saw this as one of the key reasons for China’s willingness to join the World Trade Organization. The pace of China’s financial reform has been slow in recent years because of resistance from many interest groups. But full internationalisation of the RMB is a goal which few interest groups will be able to fully resist.

If China wants to internationalise its currency, liberalisation of the capital account and exchange rate must be achieved first. The People’s Bank of China — the most reform-oriented agency of the Chinese government — has a particular role in pushing for the internationalisation of the RMB to speed up China’s financial reform. Qianhai is the testing ground of its efforts and, if successful, will be the star in the next phase of China’s reform process.

Liu Dongmin is Deputy Head of the Department of International Finance at the Institute of World Economics and Politics at the Chinese Academy of Social Sciences.