BALI – A Paradise on the brink of catastrophe 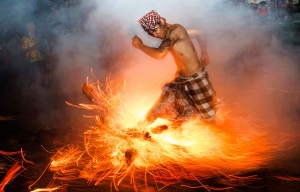 View the eye-opening video at http://www.theage.com.au/world/paradise-on-the-brink-of-catastrophe-20130504-2izj0.html

As long as water flows into his rice fields, Nengah Daryana will keep farming his family's land just to the north of Bali's holiday capital, Kuta.

For tourists, his emerald green rice paddy on the edge of town is a point of serene beauty - one of the sights that draws millions to visit the Island of the Gods. For Nengah, it's his inheritance: ''These five plots belonged to my father … My grandfather was also a farmer, and my ancestors.''
Nearby, though, Nengah's uncle, Putu Wirnatha, has been forced to abandon his family plot.

''In the past five years, it is boxed in by buildings, houses … they cut his access to water,'' Nengah says. This family's story encapsulates the dilemma tourism presents for Bali. The buildings erected to allow people to come and enjoy the view are spoiling it; the tonnes of rubbish dumped every day are fouling the beaches; the burgeoning traffic is disturbing the peace; and the massive demand for water could trump all these problems within five to 10 years.

''We are loving Bali to death,'' the chairman of Bali's tourism board, Ngurah Wijaya says.

Bali's sophisticated communal irrigation system, in which water flows from channel to field and back to channel among multiple farms, is called subak.

But subak is not just about irrigation. It's a network of farms, a ritual of meetings and agreements and an important expression of the Balinese religious philosophy of ''Tri Hita Karana'', which holds that there are three sources of happiness - people's relationship to God, to each other, and to nature.

Disrupt the flow of water, and you disrupt water worship in Balinese Hinduism, whose rituals are part of the island's allure, as well as being world-heritage listed. Now, though, because of tourism, the entire water supply of Bali is under severe stress.

Despite its tropical rainfall, clean water is in critical undersupply. I Made Suanatha, from the local non-government Wisnu Foundation, says locals use about 150 litres of water per day while tourists in hotels use 1500 litres or more.

Most of the locals' water does not come down pipes from dams. Those connected to piped water find that it rarely flows. Instead, businesses and households rely on wells. The hand-bored wells go to about 10 to 12 metres deep. At the big hotels, artesian water is pumped from 60 metres underground.

All wells are supposed to be taxed and regulated but nobody pays and nobody measures how much is drawn. The volume extracted is so great that salt water is beginning to spoil them.

Water that once flowed through rice paddies is sold to the drinking-water companies for purification and sale , or diverted to keep afloat tourist activities, such as rafting.

Catchments are declining fast. Bali's zoning regulations require a minimum of 30 per cent of the island be covered by forest, but that figure is now 23 per cent and falling.

''As more hotels, villas, golf courses and businesses are built to cater for [tourists], the quality and quantity of forest, lakes, catchments and watersheds decline, reducing the availability of water,'' Nyoman reports.

''The use of water in Bali is very far beyond the island's carrying capacity,'' Nyoman says. ''With its tourism development, Bali is in an environmental crisis caused by competition over very limited natural resources.''

The deficit means subak is breaking down.

The incentive for poor rice farmers to sell their land is immense. From his fields, Nengah earns just $4000 a year farming rice.

'By contrast, real estate in nearby Seminyak sells freehold for $250,000 per 100 square metres. It's no surprise locals put their paddies on the auction block. Farmers along Bali's south-west coast are selling to tourists who fall in love with the island and want to stay, or to the developers who serve them with fresh villas, hotels and shopping malls. Rice terraces are being converted to buildings at the rate of about 1000 hectares a year and the demand is increasing. Property analysts Knight Frank say prices for luxury property in Bali increased by 20 per cent in 2012, and in Western Australia, it's seriously spruiked by the Australian Property Institute as ''Perth's northernmost suburb''.

Farmers who have sold their land usually go to work in tourism, which puts more reliance on the industry that is 80 per cent of the economy.

''We have a regional, provincial spatial plan to try to conserve rice fields and manage Bali as an organic Island,'' says Suanatha, ''but it's not enforced … The system is not strong enough to make people not corrupt it. We have a lot of regulations but very little compliance.''

An example is the moratorium imposed in 2011 by the regional governor, I Made Pastika, on new hotel developments. It is routinely flouted by local governments, who have the power to give approval. Most recently, a 700-room hotelwas built on a previously pristine Nusa Dua beach.
Pastika says developers used an old permit and therefore did not breach the moratorium.

''Can you stop it?'' asks Wirajaya Ida Bagus, the director of the state-owned enterprise Bali Tourism Development Corporation, which is in charge of land in Nusa Dua. ''As long as there is a demand, of course [development will continue].''

Waste is another example of good rules, zero enforcement. If you fish in Bali, or surf, dive or go to the beach, you interact with it. Environment group Walhi says the tourism industry is responsible for the contamination of 13 beaches.

''It's so dirty we can't use the river,'' Gusti Lanang Oka, a former fisherman from the east-coast village of Kusamba told The Jakarta Post recently. ''If we swim we get itchy. The sea is contaminated and the fish are gone.''

A few kilometres south of the beaches of Kuta lies a noisome example. The 1300-hectare Tahura mangrove forest is one of the largest remaining in Asia and in 2009 it was proclaimed Asia's best. But it is now choking on piles of plastic, styrofoam and dead animals.

Bali's 3.2 million residents and almost 3 million visitors produce 20,000 cubic meters of garbage every day. Of this, three-quarters is not collected and tonnes of it is caught in the roots of the mangrove trees.

Pak Sumadi is paid by the government to pick up and dispose of it. But he and his helper, Gede Marada, are helpless against the tide.

''We clean up as much as possible from the river banks,'' Sumadi says, ''but no one comes to collect it. So we burn it whenever it's dry enough.''

Pastika has proposed trying to manage the forest better by leasing 100 hectares, almost one-tenth of it, to developer TRB to build a water park and accommodation. This has earned the ire of local environmental group, Walhi, which is suing him.

Tourism to Bali grows about 12 per cent annually. About 3.1 million tourists are expected this year.
The permanent population is also growing as immigrants from poorer parts of Indonesia flock to take part in the tourism gold rush. Many say this is no longer sustainable.

''The tourism industry needs to be controlled,'' Gendo says.

''We are strongly against growth of accommodation numbers in the southern part of Bali,'' says tourism board chair Ngurah Wijaya. ''We're suggesting a moratorium. We want people to come to Bali, but we want a better product.''

The question is how to regulate the flow of tourists when enforcement of any regulation is problematic. Pastika admits that, under Indonesia's ''regional autonomy'' laws, the lower levels of government, known as the kabupaten, are in charge. And they are often addicted to the dollars new development brings.

The more that rubbish coats the reefs and forces fishermen to abandon their nets, or water shortages and land prices make farming impossible, the more Bali's culture and environment degrade. Of the three routes to happiness, at least two are now under threat.

''We're on a small, fragile island,'' says Suanatha. ''The next generation will curse us for developing like this.''