Terrorism on the web: the danger of self-radicalisation 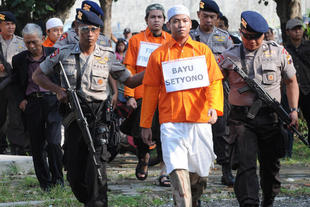 Terrorist suspects Bayu Setyono (foreground) and Firman Firmansyah were arrested April 3rd in Solo, Central Java. With extremist groups becoming more fragmented and shadowy in nature, worries have increased over the dangers of "self-radicalisation" via the internet.

With extremist groups proving adept at harnessing digital technologies and the internet for their violent purposes, calls are mounting for governments, NGOs and Islamic organisations to be more active in countering such messages.

Internet and social media sites are providing extremists with a potent vehicle for spreading their ideologies and drawing in recruits, officials and counterterrorism experts say, warning that greater awareness of digital-era threats is urgently needed.

In March, interior ministers from Arab countries – meeting at the 30th session of the Arab Interior Ministers Council in Riyadh -- agreed on a set of recommendations on monitoring extremist websites and online communications among terrorist groups.

The same month, at the International Conference on Terrorist Rehabilitation and Community Resilience in Singapore, combatting cyber-based threats was high on the agenda.

"In many ways, the terrorists are very successful in cyberspace," Rohan Gunaratna, head of the International Centre for Political Violence and Terrorism Research (ICPVTR), told participants at the Singapore event, according to the Straits Times.

"It is very important for us to build in the next 10 years the capacities and capabilities to counter the increasing presence and the operation of these groups in cyberspace," he said.

More than 10,000 extremist websites are known to be active in Southeast Asia, but only 100 sites have been launched to combat them, Rohan said.

The challenge of fighting digital extremism
In Indonesia, the national counterterrorism agency is working together with Muslim community leaders and non-government organisations (NGOs) to prevent radicalisation of young people.
"We take precautions to gather a variety of information sources related to the growth of terrorism, including internet content, and informed the Ministry of Communication to block them," agency deputy head Agus Surya Bakti explained at a recent meeting in East Java on preventing terrorism.

However, efforts to track jihadist activity on the web remain in their infancy, and the challenges are significant.

"There are many local NGOs working on deradicalisation efforts. However, they are not yet optimal. Combating terrorism through the internet, for example, is relatively new for those kinds of organisations. It is also expensive because it requires specific skills in technology," said Dhyah Madya Sri Ningrum, who heads Lazuadi Birru, an organisation that promotes deradicalisation.
Although countries such as Indonesia and Malaysia have been largely successful in breaking up key terrorist networks, shadowy cells continue to operate underground, often requiring little formal organisation. Citizens told Khabar they are concerned that anyone with a computer or mobile phone can use the web to seek out potential recruits.

"We are living in a virtual era. The internet not only satisfies the curiosity but also triggers a wrong ideology. We need to be really careful," said Aisya Hamid, a Malaysian visiting Jakarta. "Cyberterrorism is not only an enemy of any government. This is the common enemy of the world – the world's threat."

Brainwashing via the internet
Jakarta resident Lois Hariyanto told Khabar Southeast Asia that the internet provides opportunities for "self-radicalisation", in which lone individuals can become ensnared in a violent ideology as a result of their digital interactions.

Fadil Abdul Hamid, a 20-year-old Singaporean, is a recent example, Lois said. A part-time employee of the Singaporean Armed Forces (SAF), he was arrested in July 2012 for alleged terrorist activities.

Authorities say he used the web to read jihadist propaganda and acquire information on bomb-making, while engaged in a dialogue with Muslim preacher Sheik Feiz Muhammad and Anwar al-Awlaki, an al-Qaeda leader and recruiter killed in September 2011.

Observers say communities and governments can counter the threat by making more use of the web for counter-radicalisation efforts. Islamic groups, meanwhile, can seek to properly explain the tenets of Islam, as opposed to the distorted versions promulgated by terror groups.

"It is important to remember that material on the internet can win youths' hearts and minds and, therefore, can prevent them from becoming involved in any radicalisation through the internet," Lois told Khabar. By Okky Feliantiar for Khabar Southeast Asia in Jakarta