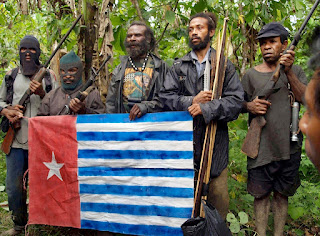 Members of the separatist Free Papua Movement (OPM) appear in front of media in the jungles of Indonesia’s Papua province on July 25, 2009. (AFP Photo / Banjir Ambarita)

Activists slammed the Indonesian government for weak statesmanship after a Papuan separatist group opened an office in Oxford, England.

“The fact that the government could not act more decisively against an individual diplomatic effort by a person like Benny Wenda shows how weak our diplomacy is,” Girindra Sanino, the secretary general of the Indonesian Citizenship Union (SAKTI), said on Saturday, referring to the Papuan exile who founded the Free Papua Movement (OPM).

Benny established an OPM office in Oxford on April 23, and the opening ceremony was reportedly attended by Oxford’s mayor and a member of parliament.

Girindra also criticized the British government for allowing Benny to set up such an office.

“By letting representatives of the OPM to open an office in the United Kingdom, the British have violated Indonesian sovereignty. The government should send a complaint to Britain immediately,” he said.

Girindra suggested that the Ministry of Foreign Affairs should change its soft diplomacy and strictly respond to any international support for the separatist movement. He added that such lax handling of situations like this are why separatist groups still exist in Indonesia.

At the same time, he said, the Indonesian government must accelerate welfare programs and infrastructure development for people in Papua to thwart separatism.

Djoko Suyanto, the coordinating minister for political, legal and security affairs, said in a text message that the British government and the opposition did not support the OPM’s decision to open an office in Oxford.

“The British government still formally recognizes the supremacy of the NKRI [Unitary State of the Republic of Indonesia] over Papua,” he said.