Press freedom in Bangladesh - "In the best interest of the media" 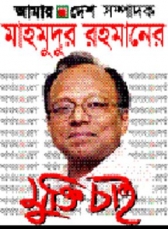 THE Indian media is sometimes said to provide the reader with more than 100% of the facts. In neighbouring Bangladesh, readers are used to having to make do with less.

The worry is that things have been getting worse of late. This week Bangladesh’s newspaper editors demanded in joint that the government free Mahmudur Rahman, the editor of the country’s biggest-circulation pro-opposition paper. The government shut down the paper on April 11th and has had him locked up ever since. The minister of information, Hasanul Haq Inu, rebuffed the editors, telling them that their appeal was “not in the best interest of the media”.

The government also rejected the editors’ demand that Amar Desh, Mr Rahman’s paper, be allowed to resume printing and that two Islamic TV stations be allowed back on the air. The television stations were shut down after they broadcast live images of the security forces’ attacks against hardline Islamist demonstrators, which left dozens dead.

The Committee to Protect Journalists says it is deeply concerned by the deteriorating climate for the press in Bangladesh. Human Rights organisations say there is only one place in South Asia that treats the idea of press freedom with lesser regard: Sri Lanka.

To be sure, Bangladesh still has some way to slide before reaching rock-bottom. It has in some respects a thriving media landscape, including an array of popular late-night political talk shows. But if recent months are anything to go by, the government’s selective approach to press freedom will grow only more overbearing.

In April 2013, the authorities appeared to be complying with the demand of a tiny, hardline Islamic fundamentalist group when it had four “atheist bloggers” arrested. The government also vowed to punish those who make derogatory comments against Islam. In the same month the telecoms regulator issued an international tender to procure a technical solution to provide it greater control over the internet (“to keep Bangladesh safe from harmful internet content and material that threaten national unity and solidarity, and are derogatory to religious beliefs, or are obscene”).
Like the rest of the country’s institutions, most of the media are aligned with or the other of Bangladesh’s two squabbling political dynasties. With elections due at the end of the year, the battle lines are hardening.

Mr Rahman is a former businessman and was chairman of the Board of Investment from 2001 to 2006, while the opposition Bangladesh Nationalist Party (BNP) was in power. His paper was selling like hotcakes; in the months before the government shut it down, the circulation had jumped six-fold, to 200,000 copies daily.

He was detained on charges of sedition, stemming from the publication last December of a series of Skype conversations between the chairman of Bangladesh’s war-crimes tribunal and a Brussels-based lawyer. The conversations showed collusion between government officials, judges, prosecutors and people who had no affiliation to the court. Taken as a whole they raised profound questions about the integrity of the trial. (The presiding judge resigned as chairman of the tribunal after questions put to him by The Economist and the publication in Bangladesh of various private e-mails.) Mr Rahman says he was tortured in custody, which the government denies.

Politicians close to the ruling Awami League (AL) revile him. Some of them ascribe to him near-supernatural powers of persuasion. They suppose he must have the ability to convince the masses of just about anything—in particular, that the BNP’s most recent government was a relatively clean one. It was a period that many people, and especially those with AL sympathies, associate with robbery on an unrivalled scale. For five years in a row, Bangladesh was left at the very bottom of international corruption league tables.

And then Mr Rahman has been accused of inciting religious hatred, too. His paper reprinted offensive material from the anti-secular blogosphere. His critics say he did so in a bid to label peaceful mass demonstrations, which demanded the death penalty for nearly the entire leadership of the Islamist Jamaat-e-Islami for crimes committed in 1971, as un-Islamic. So he stands accused of having encouraged last month’s “long march” of hundreds of thousands of Islamists from the port city of Chittagong to Dhaka, where they demanded the execution of atheist bloggers, on the ground that they were defaming Islam.

Mr Rahman was arrested a full four months after the main offence for which he was charged. The real reason for his detention might lay elsewhere.

The day before he was picked up Amar Desh had advertised an upcoming series of damning American embassy cables on Sheikh Mujibur Rahman, Bangladesh’s founding president and the father of the current prime minister, Sheikh Hasina. The website of Amar Desh announced the forthcoming series, which was to be translated into Bengali from the WikiLeaks trove, with the headline: “Mujib: The New Mughal”. This was a clear reference to the absolute powers that “Chairman Mujib” assumed upon decreeing one-party rule in February 1975.

Another cable notes that Sheikh Mujib “began to suffer the classic paranoia of the despot”, speaks of his “failure to meet their (the Bengalees’) aspirations” and “his apparent desire to hold power largely for personal aggrandisement and dynastic reasons”.

The content of the cables and the timing of Mr Rahman’s imprisonment makes it seem that the government’s desire to control the media has a lot to do with its imperative to defend its own version of the country’s history. The press would hardly be the first Bangladeshi institution to fall crumble under such pressure. From Banyan, The Economist (Picture credit: Free Mahmudur Rahman)