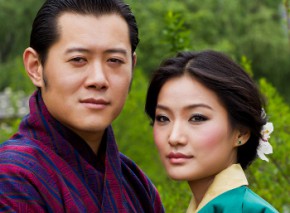 Ever since the landmark April 2012 United Nations session convened by Bhutan on "Happiness and Well-being: Defining a New Economic Paradigm" attracted 600 participants including presidents, heads of state, economists, Nobel laureates, scholars, NGOs and spiritual leaders to consider Gross National Happiness (GNH) as a holistic extension to Gross National Product (GNP) indicators, Western economists and academics have lost no time clambering aboard the new bandwagon of hope.

Bhutan has captured the world's imagination as the last surviving Shangri-La on planet Earth. A cottage industry of happiness conferences is sprouting from Canada to the US and from Denmark to Germany. Bhutan, which few can place on a map, has overnight become the Mecca for happiness-economics researchers and frayed academics spinning a new career.

On the day the high-level UN meeting was being addressed by the Prime Minister Jigme Thinley, the Bhutan Observer wryly noted: "The Western media, as usual, has started calling Bhutan 'the happiest country in the world'. As a nation, to be described in such wholesome light is always elevating...but on deeper thought it makes us cringe. For all the positive developments, we are a country, like any other, with our own share of problems."

It all started with the Fourth Druk Gyalpo (Dragon King)
Jigme Singye Wangchuk was 17 when his father died abroad in 1972. He was formally crowned the Fourth King of Bhutan at 19?in 1974. The young heir traversed the country on horseback, talking to and experiencing life among the farmers, village headmen and civil servants scattered through Bhutan's harsh, mountainous terrain. He took stock of the kingdom first hand while sharing his ideas for inclusive growth and well-being of society.

The King's message was that the overall happiness of all the people was more important than profligate production and consumption which was the standard GDP track of economic progress. That telling insight evolved three decades later into Bhutan's elaborate GNH index of development formally implemented in 2005. He defied entrenched economic orthodoxy for the good of Bhutan as he saw it.

It took the meltdown of the capitalist free-market model in the USA and Europe for Bhutan's GNH concept to gain acceptance at the United Nations. Following the April 2012 conference, the UN declared March 20 'International Day of Happiness'.

Premier Jigme Thinley puts GNH into context best: "We have now clearly distinguished the 'happiness' in GNH from the fleeting, pleasurable 'feel good' moods so often associated with that term. We know that true happiness cannot exist while others suffer, and comes only from serving others, living in harmony with nature and realizing our innate wisdom."

On March 20 - the UN's designated International Day of Happiness, the Organization for Economic Co-operation and Development (OECD) issued its Guidelines on Measuring Subjective Well-being. It is a standardized framework for government statisticians to collect and publish information on codified subjective factors.

Such internationally standardized methodology of data collection and measurement is vital for any meaningful comparison of relative performance across countries.

In the past 10 years there have been spotty attempts by academics and public opinion pollsters to measure subjective well-being through a variety of formats on small sample sizes. The first serious government attempt (besides Bhutan) to capture subjective well-being data to complement GDP indicators, was the experiment in 2011/12 by the UK Office for National Statistics, on a sample of 165,000 citizens, probing personal relationships, health and work.

Chetri is tasked with creating an oasis of GNH experience on 64 acres of pristine mountain forest in Bumthang's sacred Chhoekhor Valley in central Bhutan. Architects from Europe, America and Japan helped to design meeting and meditation spaces which blend into the landscape using local materials, craftsmen and traditional techniques.

"The idea is to allow the silence of the mountains and the forest to help visitors get centered. We need to re-connect with Mother Earth. It is not in the hustle and bustle of the urban chase that we can listen to our inner voice to find our true purpose and destiny," Chetri says.

GNH Centres are being initiated in Germany, Japan and Korea by reformers who want to accelerate the transformation in their countries. Bumthang would be the 'mother-center' to nurture these international, autonomous GNH points which are springing up. Domestic GNH units will follow in the districts of Bhutan so that community activity is framed, informed and modulated by mindful adherence to GNH principles from the ground up.

Happiness for whom? Life remains hard for most
At the Gaeddu College auditorium where we met at the 'Human Values' workshop mid-April, Chetri strode onstage as keynote speaker and pinged a prayer bell, asking everyone to close their eyes for two minutes of silent meditation. That illustrated the power of still introspection to live in the moment - 'mindfulness' as he termed it. He recited an inscription he found on a building in Melbourne while exploring the city: "We are not human beings in search of spiritualism. We are spiritual beings in search of humanity."

I asked Chetri what impact democracy and competitive elections is having what is fundamentally a feudal society. He did not seem overly impressed with the current campaign fever for Bhutan's second general election.

"We have eager candidates promising instant improvements which raise expectations unrealistically," he said. "Unfulfilled expectations can be disruptive. There is no shortcut or quick-fix."

To my follow-up observation that GNH seemed an obsession of the leadership for external consumption rather than to deliver tangible benefits on the ground, Chetri pointed out that Bhutan is ahead on most of its Millenium Development Goals (MDGs) set by the United Nations as minimal 2015 targets for member states. Poverty reduction, sanitation, potable water, rural electrification, health care and education access are well in-hand. The basics are achieved. The longer-term transformation of society begins with childhood education. Chetri's team is finalizing a GNH curriculum for schools and colleges. "We have to invest in our youth to build an enduring, values-based society which transforms the individual, family, community and nation."

He has no illusions about the enormity of the challenge. But Bhutan is further ahead than any other nation on earth in intuiting that the pursuit of wealth without equity is a fool's errand. Asia Sentinel