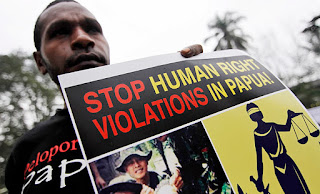 A member of the National Papua Solidarity group takes part in a rally to denounce ongoing human rights violations in the restive province.
Amnesty International has decried a repressive human rights climate in Indonesia and a worrying lack of progress in addressing past abuses, in a report that is also the third in as many weeks to criticize rising religious intolerance in the country.

The 2013 report on “The State of the World’s Human Rights,” released today, cited problems in six areas, including “persistent allegations” of rights violations by police, repressive legislation invoked against peaceful political activists and the continued criminalization of freedom of religion.
Other problem areas were women’s rights, where Amnesty identified various setbacks and obstacles, as well as scant progress in delivering justice for past rights violations and the continued practice of handing down the death penalty — although no executions were carried out in 2012, the year in review in the report.

On the issue of rights violations by police and security forces, the report cited “excessive use of force and firearms, and torture and other ill-treatement.”

“Internal and external police accountability mechanisms failed to adequately deal with cases of abuses committed by police, and investigations into human rights violations were rare,” it said.
It also found that at least 76 “prisoners of conscience” remained behind bars, mostly from the regions of Papua and Maluku, where low-level separatist insurgencies are being waged, and accused the authorities of using “repressive legislation to criminalize peaceful political activists.”
Rights activists and journalists also fell victim to violations of freedom of expression, while news and nongovernmental organizations were “denied free and unimpeded access to the Papua region.”

On the issue of freedom of religion and belief, Amnesty found that religious minorities — including Ahmadiyah, Shiites and Christians — faced ongoing discrimination, intimidation and attacks.
“In many cases the authorities failed to adequately protect them or bring the perpetrators to justice,” the report said.

It also said that authorities “used incitement and blasphemy provisions to criminalize freedom of religion, as well as freedoms of expression, thought and conscience.”

It noted that at least six people were jailed for incitement of blasphemy charges, including Alexander Aan, a self-professed atheist who was sentenced to two and a half years in prison last June for posting statements and pictures online that “some people construed as insulting to Islam and the Prophet Muhammad.”

The fourth issue that the report highlighted was that of women’s rights, with women and girls found to be facing “ongoing barriers to exercising their sexual and reproductive rights.”

“A 2010 government regulation permitting ‘female circumcision’ remained in effect, in violation of Indonesia’s obligations under international human rights law. The CEDAW [Convention on the Elimination of all Forms of Discrimination Against Women] Committee called on the government to withdraw the regulation and adopt legislation to criminalize the practice,” the report said.

Women were also let down by the continued lack of protection for domestic and migrants workers, the vast majority of whom are female, Amnesty said.

“For the third successive year, [the House of Representatives] failed to debate and enact a domestic workers law, leaving domestic workers… vulnerable to economic exploitation and the denial of their rights to fair conditions of work, health and education,” the report said.

It added that although Indonesia had ratified a 1990 international convention on migrant worker protection, “a lack of adequate legal protection in the country exposed migrant domestic workers, mostly women and girls, to trafficking, forced labor practices and other human rights abuses in Indonesia and overseas.”

The fifth point raised in the report focused on the continued lack of redress for past human rights abuses, including the bloody reprisal to the independence referendum in East Timor in 1999 and rights abuses by security forces and pro-Jakarta militias against suspected separatists in Aceh and Papua.

“In September, the Indonesian government announced at the UN Human Rights Council that they were finalizing a new law on a Truth and Reconciliation Commission; however, no progress was reported. A multi-agency team set up by the president in 2011 to devise a plan to resolve past human rights violations had yet to announce any concrete plans,” Amnesty said.

It also cited the refusal by the Attorney General’s Office to launch an inquiry into findings by the National Commission of Human Rights (Komnas HAM) about possible crimes against humanity in the state’s anti-communist purge of 1965-1966.

President Susilo Bambang Yudhoyono also came in for criticism for failing to act on House recommendations in 2009 to bring to justice those involved in the enforced disappearance of 13 pro-democracy activists in 1997 and 1998, and to search for missing activists and provide rehabilitation and compensation to their families.

There was a glimmer of positive news on the sixth and final point in the report, in that no executions were carried out in 2012, the fourth straight year, while one death row inmate even had their sentence commuted.

However, the government resumed the practice this year, executing four people so far, with plans to put to death another six.

Amnesty also noted that at least 12 death sentences were handed down last year and at least 130 people remained on death row.

Roichatul Aswidah, a Komnas HAM commissioner, acknowledged that Indonesia much to address, particularly on the matter of protecting religious minorities.

“The current government under Yudhoyono seems not to be protective of the rights of minority groups. This is worrying. We are denying our very own identity of being a country with great diversity by doing this,” she said.

On the death penalty, she questioned why the government was adding to the list of infractions punishable by death.

“Human rights issues are not issues that are simple and could be easily solved, I understand that. The question is, are we on the right track?” she said.

Alvon Kurnia Parma, from the Indonesian Legal Aid Foundation (YLBHI), said the country’s legal framework was not wholly to blame for supporting a climate conducive to rights abuses.
He acknowledged that while some laws and regulations were flawed, the main problem was a general political reluctance to uphold the rights of minorities.

He added that once the political structure was fixed so that those in power did not feel compelled to pander to the majority at the expense of abandoning minorities, then the task of fixing the legal and institutional frameworks would be easier.

Amnesty’s report comes two days after the US State Department published its “International Religious Freedom Report 2012,” in which it also called out the Yudhoyono administration for failing to protect the rights of religious minority groups.

It cited reports of police collaborating with hard-line groups against members of sects deemed to be “deviant,” and the failure by security forces to act when radical non-state actors attacked minority sects.

That report came three weeks after the US Commission on International Religious Freedom, an independent federal advisory body, issued its own report that warned that Indonesia’s “rich tradition of religious tolerance and pluralism has been seriously threatened by arrests of individuals the government considers religiously deviant and violence perpetrated by extremist groups.” By Gabriel Kereh Jakarta Globe (JG Photo/Rezza Estily)