The Indonesian Presidential Race – Will it be Prabowo-Jokowi? The International Community is reminded of Prabowo’s Dark Past…see below 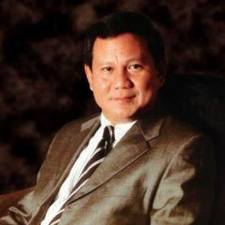 No Indonesian political figure has a higher presidential electability rating than Joko Widodo and Prabowo Subianto. In a survey conducted in April by the Center for Strategic and International Studies (CSIS), Jokowi and Prabowo topped all the lists.

But that’s just what pollsters say. Politics is full of probabilities. Many analysts have over time been proven wrong in their predictions and even the most unexpected sometimes becomes reality. Jokowi won the gubernatorial elections in Jakarta, even though incumbent Fauzi Bowo had the backing of political heavyweights and plenty of funds.

Despite an ongoing campaign against him, Prabowo’s popularity still ranks higher than that of most presidential candidates. For the common people, Prabowo seems to be an ideal choice when compared with his rivals, who barely manage to get the support of 10 percent.

But Jokowi and Prabowo can’t become presidential candidates yet. Jokowi doesn’t want to be nominated. Besides, his party boss Megawati Sukarnoputri, chairwoman of the Indonesian Democratic Party of Struggle (PDI-P), still wants to run for president herself.

Prabowo, although his Great Indonesia Movement Party (Gerindra) nominated him as a presidential candidate, still needs to meet the threshold requirement of 20 percent of seats in parliament or 25 percent of the national vote. He may have to forge a coalition with other political parties, but Gerindra is trying hard to expand its voter base.

Only the ruling Democratic Party, the Golkar Party and the PDI-P would likely be able to nominate presidential candidates without forming a coalition. The Democrats have no candidate for the moment but look forward to a party convention soon to name one. That could be Trade Minister Gita Wirjawan.

If Megawati is smart, she doesn’t run — as she would surely lose. She would be better off as a kingmaker.

Golkar is firm with Aburizal Bakrie as its presidential candidate while the PDI-P sticks to its decision that only Megawati can run.

But in politics, nothing is certain. Who knows what would happen if Jokowi and Prabowo indeed get the nomination. If Megawati is smart, she doesn’t run — as she would surely lose. She would be better off as a kingmaker and nominate Jokowi as the PDI-P’s candidate for president. Or forge a coalition once again with Gerindra to nominate Prabowo. Or perhaps even propose a Prabowo-Jokowi ticket. As for the Democrats, President Susilo Bambang Yudhoyono surely can be a kingmaker, too. He knows no Democrat can match Prabowo’s popularity and might as well initiate a Democratic Party-Gerindra coalition.

Both Jokowi and Prabowo are nationalists who support the common people. Jokowi wants to promote education, health, housing and welfare while Prabowo sides primarily with the rural community, fishermen, farmers and cooperatives. Many believe that Prabowo represents a new hope in a country where corruption is rampant and present in all institutions and levels of administration.

Political analyst Indria Samego has said that Prabowo has a better chance to become a presidential candidate than other former military figures such as Sutiyoso, Wiranto, Endriartono Sutarto or even Yudhoyono’s in brother-in-law Pramono Edhie Wibowo. He also said that the perception of Prabowo as a strong leader boosts his chances.

There is no perfect president. Indonesia has since independence been led by Sukarno, Suharto, B.J. Habibie, Abdurrahman Wahid, Megawati Sukarnoputri and Susilo Bambang Yudhoyono. Each has had pluses and minuses. However, their proven achievements must be preserved and their mistakes must never be repeated.

Whoever wins the presidency in 2014, the interests of the people — justice, welfare, self-sufficiency and economic sovereignty — must become the top priority.

Yanto Soegiarto is the managing editor of Globe Asia, a sister publication of the Jakarta Globe.

Troops under Prabowo's command kidnapped and tortured nine democracy activists in the late 1990s.[13] In their testimonies, former detainees told of being tortured for days in an unidentified location, allegedly a military camp where most of their time was spent blindfolded, while being forced to answer repeated questions, mainly concerning their political activities. According to the testimonies, they were kicked, punched, terrorised physically and mentally, and given electric shocks.[14]

In early 1998, As the effect of the East Asian financial crisis began to worsen for Indonesians, and social disorder and open resentment of Suharto's administration increased, Prabowo publicly urged Indonesian Muslims to join him to fight "traitors to the nation".[15] In a private conversation with Sofyan Wanandi, Prabowo said he was willing "to drive all the Chinese out of the country even if that sets the economy back twenty or thirty years."[16] and "You Chinese Catholics are trying to topple Suharto". To which Sofyan replied "Only Muslims or the Army are strong enough to do that. It's ridiculous to think that groups as small as Chinese or Christians could do it."[15]

On the first day of the May 1998 riots, Prabowo urged armed forces commander, Wiranto, to let him bring his Strategic Reserve units from outside Jakarta into the city.[17] In the previous weeks, hundreds of men trained by Kopassus (under Prabowo's command from 1995 until February 1998) were flown from Dili to Yogyakarta in chartered planes, and then on to Jakarta by train.[18] On the morning of the 14 May, Kopassus troops escorted young thugs from Lampung in south Sumatra into the capital.[19] Thus Prabowo was accused of using his allies and recent command to import minions to create more trouble while Wiranto had declined to give Prabowo's current command, Kostrad, permission to quell the existing trouble, in line with classic Javanese tactic to stir chaos to discredit a rival and/or seize power.[18][20]

Later investigations into the May riots revealed that violence in Jakarta was the result of an internal struggle within the military elite to become Suharto's successor.[21] Many believed Prabowo, as Strategic Reserve commander, sought to become his father-in-law's successor and coveted the Commander of the Armed Forces position held by General Wiranto, who was favored to succeed Suharto. He was also suspected of organizing the kidnappings of students and activists prior to the 1997 election (some of whom remain "missing"). Together with Operations Commander for Greater Jakarta (Panglima Komando Operasi Jakarta Raya, Pangkoops Jaya) Major General Sjafrie Sjamsoeddin, Prabowo aimed to terrorize opponents of the government and to show that Wiranto was "an incompetent commander who could not control disorder".[22][23]

During the months of August and September, the fact finding team interviewed Prabowo, Sjafrie, and other military commanders regarding their movements during the Jakarta riots. Prabowo asserted that he was unsure of the precise movements of military forces in the capital and deferred to Sjafrie.[24] In its final report, the fact finding team suspected that, on the night of 14 May, Prabowo met with several Armed Forces and prominent civilian figures at the Kostrad headquarters to discuss organization of the violence.[25] However, this was later refuted by several people who attended the meeting, including prominent human rights lawyer Adnan Buyung Nasution and Joint Fact Finding Team member Bambang Widjojanto.[26] Further testimonies by Prabowo[27] in the years following the investigation contradicted the team's report and led to skepticism of the team's allegations.[28]

On the afternoon following Habibie's inauguration as President on 21 May, Lt Gen Prabowo demanded of Habibie that he be put in charge of the army in place of Wiranto. However, Habibie and Wiranto demoted Prabowo from Kostrad commander instead, and the following day announced Wiranto's promotion to Minster of Defence and Security and to TNI commander. A furious Prabowo went to the Presidential Palace packing a side arm and with trucks of his Kostrad troops. On being blocked from entering the Habibie's office, he instead went to Suharto who rebuked him.[29][30] He was summoned by Wiranto on the 23rd, and reassigned to a non-active role in Bandung.[31]

Following the TNI investigation,[32] Prabowo acknowledged responsibility for the kidnapping of the activists.[33] He was discharged from military service in August. He and Wiranto denied that the discharge was a result of disciplinary action.[34] In August 1998, the Dewan Kehormatan Perwira (Officers Council of Honor) tried, and found Prabowo guilty of "exceeding orders" in the kidnapping of anti-Suharto activists in 1998.[35] He was discharged from military services, and went into a voluntary exile in Jordan[34] where he new that country's new young King Abdullah as a fellow commander of special forces.[36] In an interview for Newsweek Magazine in 2000, Prabowo firmly said "I never threatened Habibie. I was not behind the riots. That is a great lie. I never betrayed Pak Harto. I never betrayed Habibie. I never betrayed my country."[32]

In 2000, Prabowo became the first person to be denied entry into the United States under the provisions of the United Nations Convention against Torture and other Cruel, Inhuman or Degrading Treatment or Punishment. A combination of "foreign policy considerations, a reasonable belief that he was involved in the riots which devastated Jakarta in 1998 and coincidental timing" were reason put forwarded for the visa ban.[37][38]

Indonesia's President Yudhoyono has referred to the Jakarta hotel bombers as “people who are familiar with abducting and killing; and people who once escaped the law.”According to The Financial Times (Eight killed in attacks on two hotels in Jakarta), 18 July 2009, President Yudhoyono "did not name any individuals but appeared to implicate Prabowo Subianto, a former general and political opponent.
"He said there were people in Indonesia who had committed crimes, killed people and escaped the clutches of the law."Prabowo has admitted to overseeing the kidnapping of student activists during the dying days of the Suharto regime in 1998.